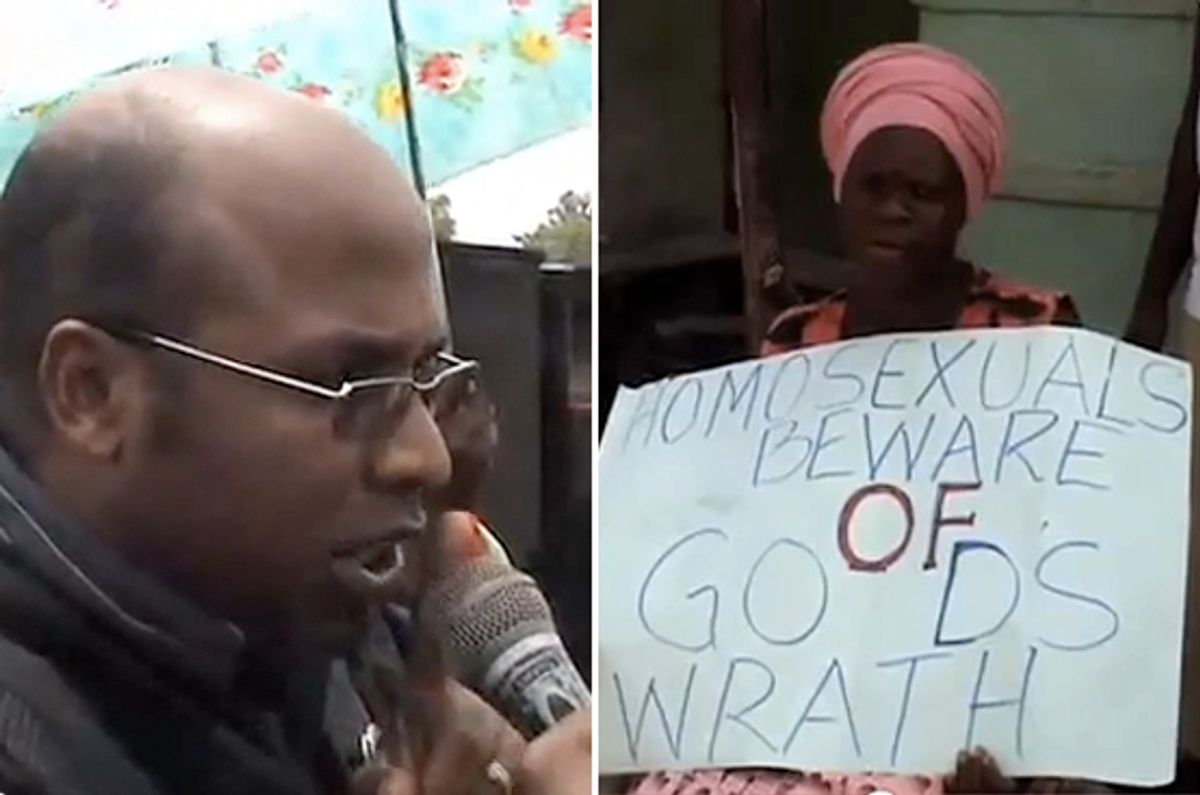 The pastor of a Nevada megachurch that provides financial support to Martin Ssempa, one of the most prominent backers of Uganda's notorious "kill the gays" bill, now concedes that his rhetoric has been "offensive" at times -- but also contends that Ssempa and the bill have been misrepresented by the media.

Kevin Odor's Canyon Ridge Church considers Ssempa, who has said that gays like to "eat da poo poo" and boasted of his efforts to "make sure that sodomy and homosexuality never sees the light of legality in this land of the pearl of Africa," a "strategic mission partner" and has provided money for his Ugandan church, an arrangement that was brought to light in a story that appeared on Salon on July 2.

At the time, Odor said he was "in conversation" with Ssempa but that he didn't think Ssempa was "the man the media and others have portrayed him to be." That stance cost Canyon Ridge its affiliation with a Nevada public health agency, which had teamed up with the church to provide local HIV testing.

But apparently that hasn't altered the church's view of Ssempa. In a video posted on Canyon Ridge's website late last week, Odor would only concede that "the way that Martin said some things, once we saw them, were ways that we never would have said them. And some methods we never would have done. And it was offensive."

But Odor also took issue with what he called the "misrepresentation" of the Anti-Homosexuality Bill, claiming that its purpose is to make the penalties equal for male and female victims of sexual abuse, called defilement in Ugandan law.

“There had been a number of sodomy laws on the books already in Uganda but there were a couple of things that weren’t protected," Odor said. "One in particular is aggravated pedophilia, basically where there was a repeat offender who was violating young men over and over again, and there wasn’t a protection for that.”

In a letter to his congregation, Pastor Odor wrote that church leaders had discussed the bill with Ssempa and that "we have listened to the motivation to protect young boys from sexual violation with the same penalties and protection that young girls in Uganda currently possess.”

Odor 's claim that Ugandan law doesn't address the molestation of boys by adult males is inaccurate. On April 18, 2007, the Uganda Parliament passed the Penal Code Amendment Act of 2007 and corrected the imbalance by removing references to gender, whether for the victim or the perpetrator. Uganda law now reads, “Any person who performs a sexual act with another person who is below the age of eighteen years, commits a felony known as defilement and is on conviction liable to life imprisonment.” The death penalty is reserved for those who defile a child knowing they are HIV positive, as well as other circumstances.

Oddly enough, even Ssempa acknowledges that current Ugandan law addresses both male and female victims of child abuse. On his blog, he has described the reasons why the Anti-Homosexuality Bill was needed:

3. Why does Uganda need bill now.

a. International groups which are coersing homosexuality down our throats ie France and Netherlands at the UN.

b. Lack of protection for the boy child from homosexual rape.

c. Lack of protection for the girls and women in the current law. Only focus on male homosexuality.

d. Lack of legislation against promotion and conspiracies to promote homosexuality.

Note: We have learnt that now the Penal Code was amended to cater for the gender imbalance in b above. (emphasis added)

Ssempa acknowledged in March that the bill was not needed to correct a gender imbalance. Odor has not responded to my questions about why he told his congregation otherwise.

The Anti-Homosexuality Bill has been condemned by, among many other people and groups, Barack Obama, Hillary Clinton, Rick Warren, World Vision, and the Philadelphia Biblical University. While the bill does replicate existing law on child molestation, it also calls for the death penalty for those who engage in same-sex intimacy and are also HIV-positive, and for life in prison for sexual acts involving two people of the same sex. The bill's introduction leaves little doubt about the intent:

The object of this Bill is to establish a comprehensive consolidated legislation to protect the traditional family by prohibiting any form of sexual relations between persons of the same sex;

While it is true that a coalition of pastors in Uganda, including Ssempa, has called for reducing the death sentence for those who rape minors under 18, the same coalition made no recommendations about reducing the life sentence for consensual sex among adults of the same gender. The bill has not been amended, according to Charles Tuhaise, a parliamentary researcher, and remains before committee.