Charlie Rangel doesn't know how to say "no comment" 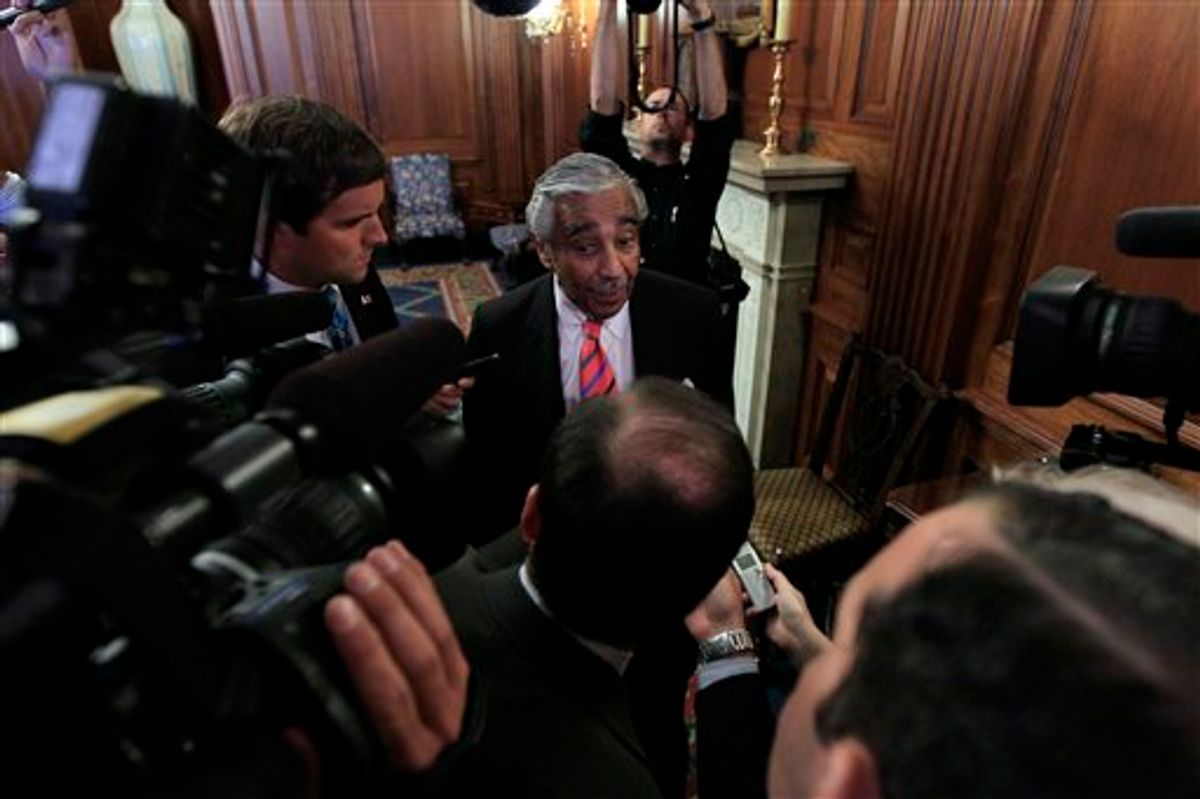 The biggest news from Charlie Rangel's press conference, according to MSNBC's coverage, is that he apologized to that twerp Luke Russert.

The longtime Harlem congressman went before the press to answer questions about his upcoming appearance before an ethics subcommittee charging him with unspecified violations of House rules. Except he had no answers. He only called the press conference, he said, because "it's very difficult thing for me to turn away reporters."

Rangel said at the outset that his lawyers had advised him not to address the media. But: "I don't know how to say 'no comment.'"

What did Rangel do, exactly?

While the panel did not disclose details of those violations, officials with knowledge of the investigation have said that they involve Mr. Rangel’s acceptance of four rent-stabilized apartments in Manhattan and efforts by his office to preserve a half-billion-dollar tax break for an oil executive who pledged a donation for an educational center being built in Mr. Rangel’s honor.

I'm sorry -- Rangel almost certainly did violate House ethics rules, but I was under the impression that securing tax breaks for political supporters was actually how most tax breaks were secured in Congress. As for the rest? Well...

Rangel's transgressions look pretty serious all lined up, but until I see proof to the contrary, I tend to think that all of them stem from the fact that he has no clue how to get his finances in order. Does anyone think Rangel's going over his own tax returns? His worst crime is abusing rent-control -- something a good half of New York's rich old people are also guilty of.

I confess to being hopelessly biased in favor of Rangel, in part because he says things like this.

(Would Rangel have these problems if he were a senator? Remember the Ethics Committee probes into Mitch McConnell's fundraising for the McConnell Center at the University of Louisville? Or the charges against Norm Coleman for living in a donor's apartment for below-market rent? Oh, right, no one cared.)

MSNBC noted Rangel's "serious" primary challenge this year from Adam Clayton Powell IV, but they failed to mention that Powell has been accused of more serious crimes. He was arrested for drunk driving ("I can't be drunk because I've eaten something," he told prosecutors) and accused of rape by two separate women in 2004. (He admitted to the sex -- in one case with a 19-year-old intern -- but insisted it was consensual and no charges were filed.)

I am probably a partisan hack apologist for being unable to get riled up about Charlie Rangel's ethical lapses, but I'd much rather see him get one last term than watch Adam Clayton Powell IV rebuild the family dynasty.