What Duran Duran taught me about girls

The '80s stars get mocked for their hair and sound, but they schooled me on female desire like nothing else 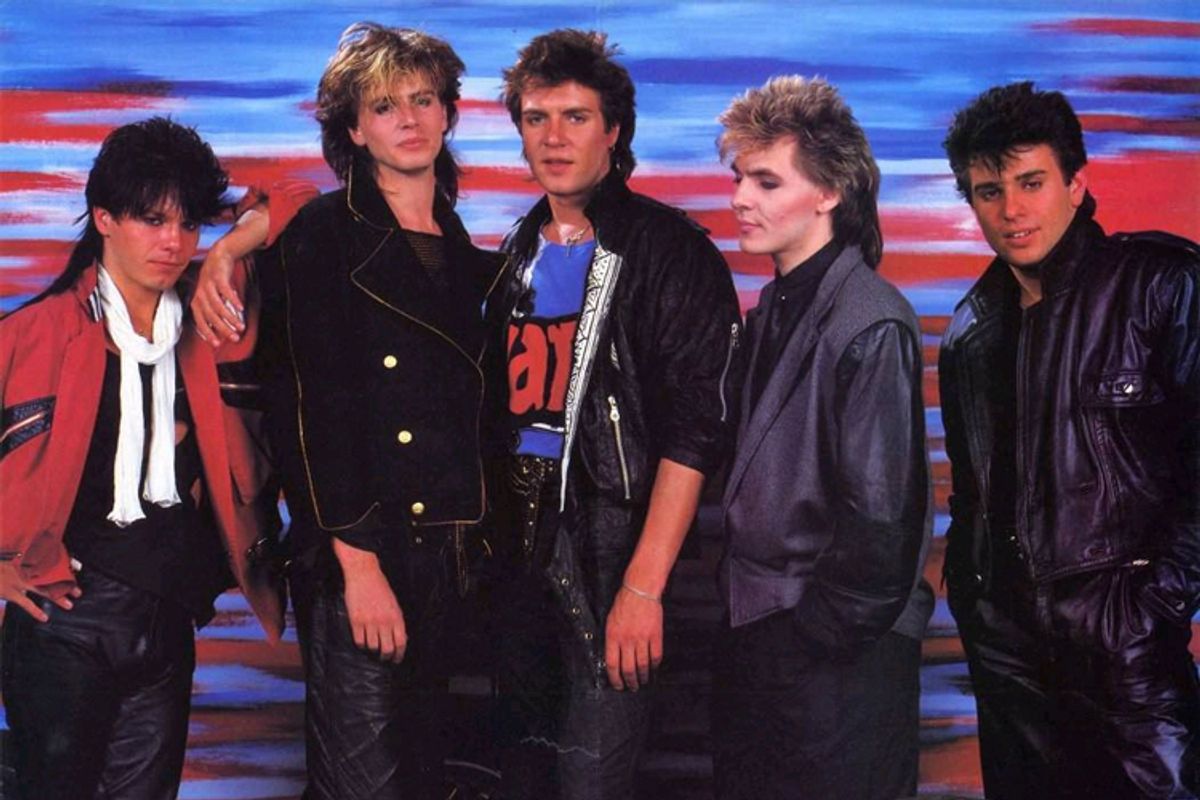 If you ever step into the Wayback Machine and zip to the 1980s, you will have some interesting conversations, even though nobody will believe a word you say. You can tell people the 20th century will end without a nuclear war. The Soviet Union will dissolve, the Berlin Wall will come down, and people will start using these things called "ringtones" that make their pants randomly sing "Eye of the Tiger." America will elect a black president who spent his college days listening to the B-52s.

But there's one claim nobody will believe: Duran Duran are still famous.

I can't believe it myself. I've always been a Duran Duran fan. I was an '80s kid, so I grew up on them. I watched Simon Le Bon and Nick Rhodes give "Save a Prayer" its world premiere live on MTV. I listened hard to the lyrics of "Is There Something I Should Know?" and pondered its existential vision of romantic love. I studied their fashion, learned their wives' names, bought their solo albums. I've always been obsessed with Duran Duran. But even more, I've been obsessed with how girls talk about them.

I was 13 when the '80s began and 23 when they ended, so this was the era of my adolescence, and I never figured anybody would remember the '80s fondly after they were over. But girls still grow up memorizing "Pretty in Pink" and "Dirty Dancing" during those constant weekend TV marathons. Anytime "Sixteen Candles" comes on, my sisters can recite every scene word for word. It's weird to see how the hair decade lives on, even for people barely old enough to remember it. At the time, we all figured we were stuck in an epoch of bogus. The country was in horrific shape, with Reagan and his cronies running amok. I mean, the biggest movie of 1985 was the one where Michael J. Fox used a time machine to get the hell out of 1985. But something has kept this all alive. And in retrospect, the epoch of bogus evolved into the apex of awesome. Who made this decision?

Girls, obviously. As Tone Loc said, "This is the '80s, and I'm down with the ladies." The ladies were not necessarily down with Tone Loc — but they're down with the '80s, and it's feminine passion that sustains the whole mythology of '80s teen dreams. And of all the absurd and perverted artifacts from that time, nothing keeps them feeling fascination like Duran Duran. Which is why I've always been fascinated, too.

The first girls I shared them with were my high school pals Heather and Lisa, girlie girls who liked to talk about Duran Duran because they liked to say the name, which they pronounced, "Jran Jran." Heather and Lisa taught me about sushi, high heels, "Wake Me Up Before You Go Go," and the importance of never letting Lisa drive your car, but the most crucial lesson was Duran Duran. I envied the religious intensity of their fandom. One day, you're a perfectly ordinary suburban princess, content with Journey and Styx, and then you hear something new and all of a sudden you're one of those girls.

When I had my first actual girlfriend, she tried putting makeup on me; I begged her to " give me the Nick Rhodes," although I was secretly hoping she would accidentally give me the John Taylor. As a die-hard punk-rock chick, she hated Duran Duran, but she liked the idea of a boyfriend who looked a little bit more like John Taylor. Unfortunately, I ended up looking kind of like Andy Taylor's bag-lady auntie. I had to face the facts. Being Duran Duran was never going to be an option. I would have settle for being a fan.

When you're a boy, you sometimes begrudge the rock stars who are bogarting your share of feminine attention. Duran Duran rank high on this chart. Boys always hated them, and there's no way the band didn't know it. They simply didn't care.

The way girls raved about DD was so different from the way we boys talked about the bands we liked. I remember hours of debate in the high school lunchroom about the Clash: Which was better, "London Calling" or "Sandinista!"? Is "Lover's Rock" really about oral sex? Which member of the band truly understood the geopolitical context of Nicaraguan history? Who had a cooler name, Joe Strummer or Tory Crimes? My female rocker friends call this "boy-list language."

Learning to speak girl languages is a tricky business. Since I am married to an astrophysicist, I am constantly looking for ways to drop the Kuiper belt or Oort clouds into conversation. But it's possible we will never agree on anything the way we agree on Duran Duran.

Since I grew up with rock 'n' roll parents, bonding over the songs they loved, it never occurred to me that love and music belonged in separate categories. When my mom and dad were growing up as 1950s rock 'n' rollers, both sang "In the Still of the Night" with their respective high school friends; my mom took the lead while my dad took the " shoo-doo shooby-doo" part, so they were a natural match. I'm sure that my mom and dad would find lots of other ways to bond if they didn't have music. But bringing people together is what music has always done best.

Rob Sheffield is the author of "Love Is a Mix Tape" and " Talking to Girls About Duran Duran ," from which this is excerpted.