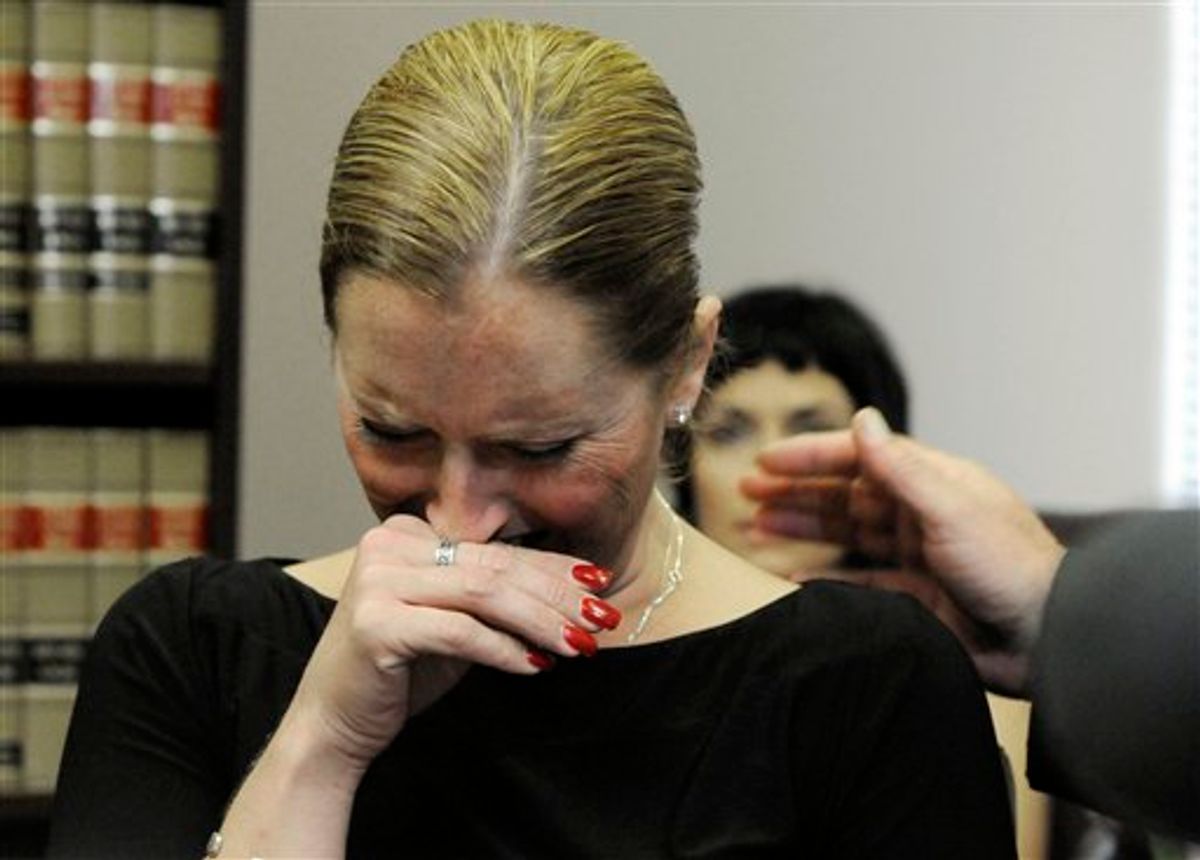 Nikki Araguz, transgender wife of a firefighter killed in the line of duty July 4, 2010, gets emotional during a press conference at her attorneys' office Thursday, July 22, 2010 in Houston. Relatives of Thomas Araguz are suing to keep her from getting benefits as Texas does not recognize same-sex weddings. (AP Photo/Pat Sullivan) (AP)
--

The day after her husband's funeral, Nikki Araguz was sued -- for being born male. The family of Thomas Araguz III, a 37-year-old firefighter who died in the line of duty, claim that his marriage to Nikki was a fraud because she allegedly concealed her biological sex from her husband. They say he found out just months ago -- after nearly two years of marriage -- and decided to separate from his wife and eventually divorce. The suit also argues that the union is invalid because same-sex marriage is illegal in their home state of Texas.

The details in this case are sparse, even as it goes to trial today, but here's what we do know: She changed her name from Justin to Nikki in 1996. In the request for a name-change, she wrote: "I, Justin Purdue, am a woman with male anatomy, working toward a sex change. I have been living and working as a woman for over one year and seek to make my new name legal and permanent."

Beyond that, very little is clear about Nikki's transition, and she's declined to comment on the matter. It does seem safe to assume that she had her sex legally changed, since the pair were allowed to marry in Texas. Even presuming she underwent sex reassignment surgery, the claim that her husband didn't know that she was born male seems dubious -- male-to-female transitions are notoriously hard to pull off, especially with an intimate live-in partner. She also vehemently denies the accusation of dishonesty: "We had a completely honest marriage, a 100 percent loving, honest marriage," she told the Houston Chronicle.

Ultimately, there are two key issues at play here: 1.) Whether Thomas was induced to marry through fraud, which is grounds for an annulment in Texas, and 2.) Whether the state considers Nikki to be female and capable of legally marrying a man. Without more background, it's hard to speculate on the first issue, but there is some legal precedent on the second matter -- and it certainly isn't good news for Nikki. In the 1999 ruling in Littleton v. Prange, a Texas court invalidated a post-op transgender woman's marriage to a biological woman on the grounds that chromosomal sex reigns supreme. That said, Texas has flip flopped on the issue and shown itself to be majorly gender-confused.

There is no telling how this case will turn out. But I'll tell you one thing: There's nothing like an estate battle to make death seem even darker.