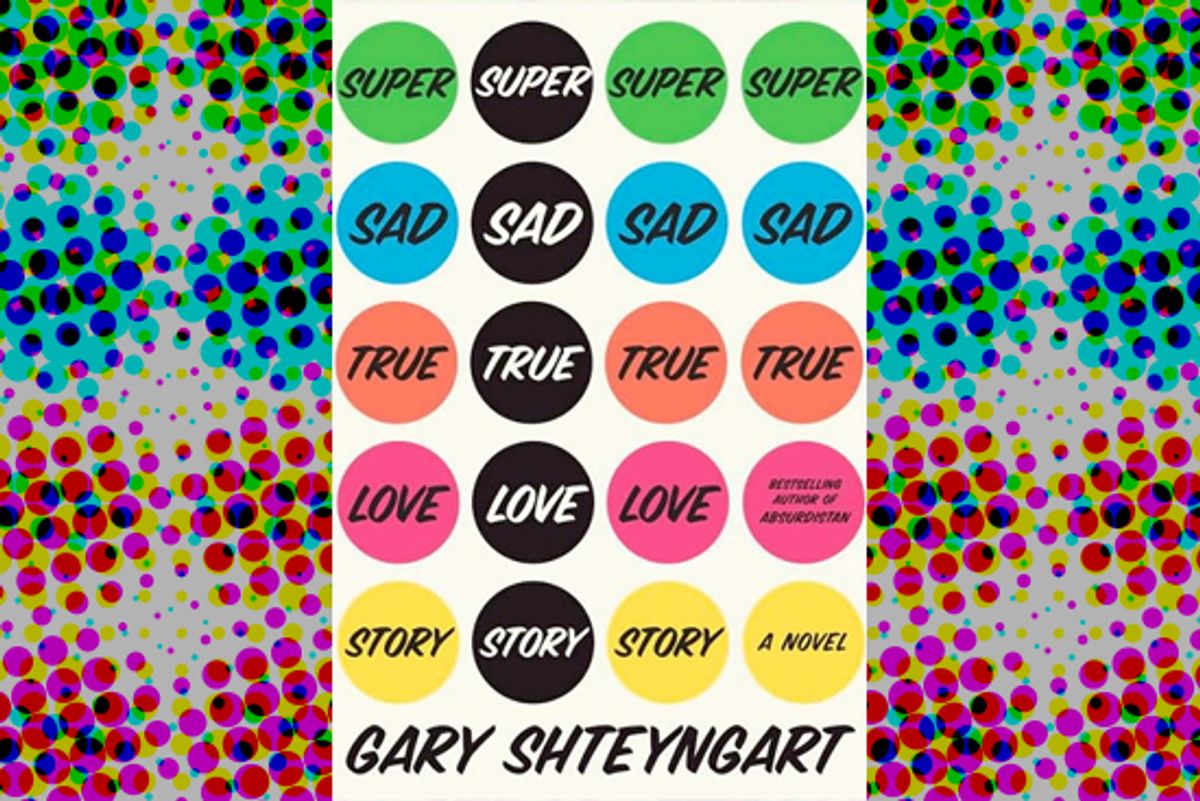 In his first two novels, "The Russian Debutante's Handbook" and "Absurdistan," Gary Shteyngart sent his gentle, nebbishy heroes (Americanized Russian Jews) on a rough ride through post-Soviet Eastern European wonderlands teeming with gangsters, hustlers and religious fanatics. That madcap, semi-Slavic milieu — with its unstable mixture of sentiment and brutality, fatalism and parvenue initiative — really got his satirical genius percolating. In Shteyngart's third novel, "Super Sad True Love Story," he saves himself the trip, making an Absurdistan of America itself by imagining the near-future disintegration of our nation under a combined load of foreign debt, plutocracy and delusions of personal exceptionalism.

Also, it's a love story, and as super-sad as the title promises. Sometime in the next decade or so, Lenny Abramov, an indifferently effective sales representative for an outfit called Post-Human Services, meets Eunice Park, a Korean-American recently graduated from Elderbird College (the equivalent, I'm guessing, of Andover) with a double major in Images and Assertiveness. He's 39 and preoccupied with the bodily decay he hopes to correct if he can ever afford his own company's services: They sell "life extension" and "dechronification," but only to HNWIs (High Net-Worth Individuals — this is an acronym-crazed world we're talking about). Lenny is instantly smitten, bewitched by Eunice's blend of youthful beauty and surly attentiveness. She calls him "nerd face" and "old," but kindly adjusts his shirt cuffs and shows him how to properly brush his teeth.

Lenny and Eunice's rickety affair unfolds in a New York City smartening itself up for a visit from China's central banker, "unofficially the world's most powerful man." In this economy, the most desirable commodities have prices pegged to the yuan. Something called the Bipartisan Party has taken over the government, and the hardline policies of Secretary of Defense Rubenstein are applauded by Lenny's parents — Soviet émigrés from way back who watch nothing but FoxLiberty-Prime and FoxLibertyUltra in the sanctity of the Long Island enclave Lenny describes as their "vibrant right-wing habitat."

The most slicing satire in this novel, however, is reserved for the technologized culture of everyday urban life; Shteyngart is the Joseph Heller of the information age. His characters carry networked devices called äppäräti wherever they go, emitting (willingly or not) such data as their cholesterol and stress levels, credit rankings, self-esteem and relationship history, as well as their off-the-cuff evaluations of friends and strangers. "Learn to rate everyone around you," a co-worker admonishes Lenny: The instantaneously broadcasted metrics include such categories as Personality, Sustainability and Fuckability. When a friend suggests that they "FAC" while hanging out in a bar, clueless Lenny has to be told that this acronym means "'Form A Community' ... It's, like, a way to judge people. And let them judge you." (Lenny, by the way, comes in last place among 40 in the category of "Male Hotness.")

Shteyngart's future America is a land of run-on corporate monikers ("LandOLakesGMFordCredit") and capitalized yet disturbingly vague careers: middle-class people work in either Retail, Credit or Media. Journalism as we know it has been replaced by "streaming" narcissists, whose "shows" consist of a mishmash of political commentary, health tips, celebrity gossip, nostalgia, porn and discussions of such Seinfeldian trivia as "the 'wah-wuh' sound of the doors closing on the 6 train versus the resigned 'sheesh' sound on the L." One of Lenny's best friends dates a woman "who spends about seven hours a day streaming about her weight" (her show's signature line is "Hey, girlfriend, gots muffintop?") Another friend streams critiques of U.S. foreign policy "intermixed with his own hardcore gay sex."

The peril in writing about satire this accurate is that it's tempting to list every clever little dart that lands right in the bull's-eye. I could go on about how perfectly Shteyngart captures the poignant, adolescent crudity adopted by Eunice and her girlfriends; their pet names for each other include "ass hoo-kah," "slut" and, of course, "betch." (They also shop for sportswear in the JuicyPussy line on a website called AssLuxury.) Since the narrative is divided between Lenny's old-fashioned diary entries and Eunice's e-mails and IMs, we know that behind all that pornographic faux swagger these girls are perilously vulnerable.

That's the difference between Shteyngart and the average literary satirist (or even an above-average one, like Martin Amis): his warmth. I almost attached the "mercilessly" to the word "accurate" in the first sentence of the paragraph above, but had to stop myself, because "Super Sad True Love Story" is in fact overflowing with mercy. In Eunice, Lenny sees two elements: the tough, family-first immigrant fiber inherited from her parents, which is what the two of them have in common, and a history-free American optimism manifested as commodity worship. He loves both. Watching her shop for clothes, he marvels at, and pities, her "attempt to extract meaning from an artifact that contained mostly thread. If only beauty could explain the world away. If only a nippleless bra could make it all work."

It's a high-wire act, pulling off a novel that's simultaneously so biting and so compassionate, and in his earlier books Shteyngart, while unfailingly shrewd and funny, wasn't always this tender. "Super Sad True Love Story" is indeed a sadder, and also a better, book. Perhaps it's the setting that brings it out in him: an America he could only truly love now that he thinks it's melting away. (He can make you feel the loss of Lenny's co-op apartment as a muted Chekovian tragedy, the passing of an era in 750 square feet.) That's what slips through Lenny's fingers in the personified form of Eunice Park, the fleeting, hopeless dream of escaping the universal fate of humankind. "Forget it, Lenny," you want to whisper in his ear. "It's Absurdistan."

Books Fiction Gary Shteyngart Our Picks What To Read