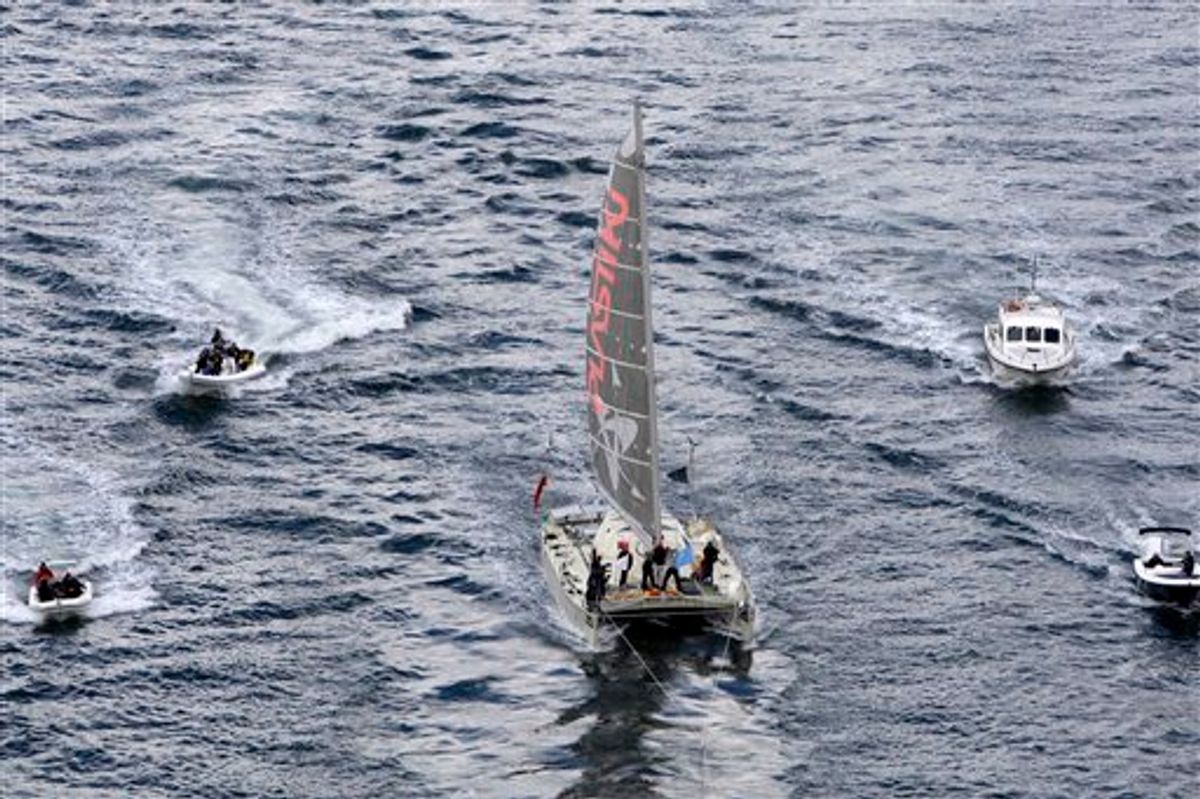 The Plastiki, a boat made out of 12,500 recycled plastic bottles, sails on Sydney Harbour Monday, July 26, 2010, four months after it set out from San Francisco on a journey across the Pacific Ocean meant to raise awareness about the perils of plastic waste. The 60-foot (18.2 meter) catamaran that weathered fierce ocean storms during its 8,000 nautical miles at sea, left San Francisco on March 20, stopping along the way at various South Pacific island nations including Kiribati and Samoa. (AP Photo/Rick Rycroft) (AP)
--

A sailboat largely constructed from 12,500 recycled plastic bottles has completed a 4-month journey across the Pacific Ocean meant to raise awareness about the perils of plastic waste.

The Plastiki, a 60-foot (18-meter) catamaran, and its six crew weathered fierce ocean storms during its 8,000 nautical miles at sea. It left San Francisco on March 20, stopping along the way at various South Pacific island nations including Kiribati and Samoa. It docked Monday in Sydney Harbour.

"This is the hardest part of the journey so far -- getting it in!" expedition leader David de Rothschild yelled from the boat as the crew struggled to maneuver the notoriously tough-to-steer vessel into port outside the Australian National Maritime Museum.

A crowd of about 100 erupted into cheers after the Plastiki finally docked. De Rothschild -- a descendant of the well-known British banking family -- exchanged high fives and hugs with his crew, pumping his fists into the air in victory.

"It has been an extraordinary adventure," he said.

De Rothschild, 31, said the idea for the journey came to him after he read a United Nations report in 2006 that said pollution -- and particularly plastic waste -- was seriously threatening the world's oceans.

He figured a good way to prove that trash can be effectively reused was to use some of it to build a boat. The Plastiki -- named after the 1947 Kon-Tiki raft sailed across the Pacific by explorer Thor Heyerdahl -- is fully recyclable and gets its power from solar panels and windmills.

The boat is almost entirely made up of bottles, which are held together with an organic glue made of sugar cane and cashews, but includes other materials too. The mast, for instance, is recycled aluminum irrigation pipe.

"The journey of the Plastiki is a journey from trash to triumph," said Jeffrey Bleich, the U.S. ambassador to Australia, who greeted the team after they docked.

During their 128-day journey, the six crew lived in a cabin of just 20 feet by 15 feet (6 meters by 4.5 meters), took saltwater showers, and survived on a diet of dehydrated and canned food, supplemented with the occasional vegetable from their small on-board garden.

Along the way, they fought giant ocean swells, 62-knot (70 mile-an-hour) winds, temperatures up to 100 degrees Fahrenheit (38 degrees Celsius) and torn sails. The crew briefly stopped in Queensland state last week, after battling a brutal storm off the Australian coast.

Skipper Jo Royle also had the particular challenge of being the only woman on board.

"I'm definitely looking forward to a glass of wine and a giggle with my girlfriends," she said.

Vern Moen, the Plastiki's filmmaker, missed the birth of his first child -- though he managed to watch the delivery on a grainy Skype connection. He met his son for the first time after docking in Sydney.

"It was very, very surreal to show up on a dock and it's like, 'here's your kid," he said with a laugh.

Although the team had originally hoped to recycle the Plastiki, de Rothschild said they are now thinking of keeping it intact, and using it as a way of enlightening people to the power of recycling.

"There were many times when people looked at us and said, 'you're crazy,'" de Rothschild said. "I think it drove us on to say, 'Anything's possible.'"