Forget Angelina Jolie. The real star of this geek gathering is the man who brought us the Hulk, Spider-Man and more 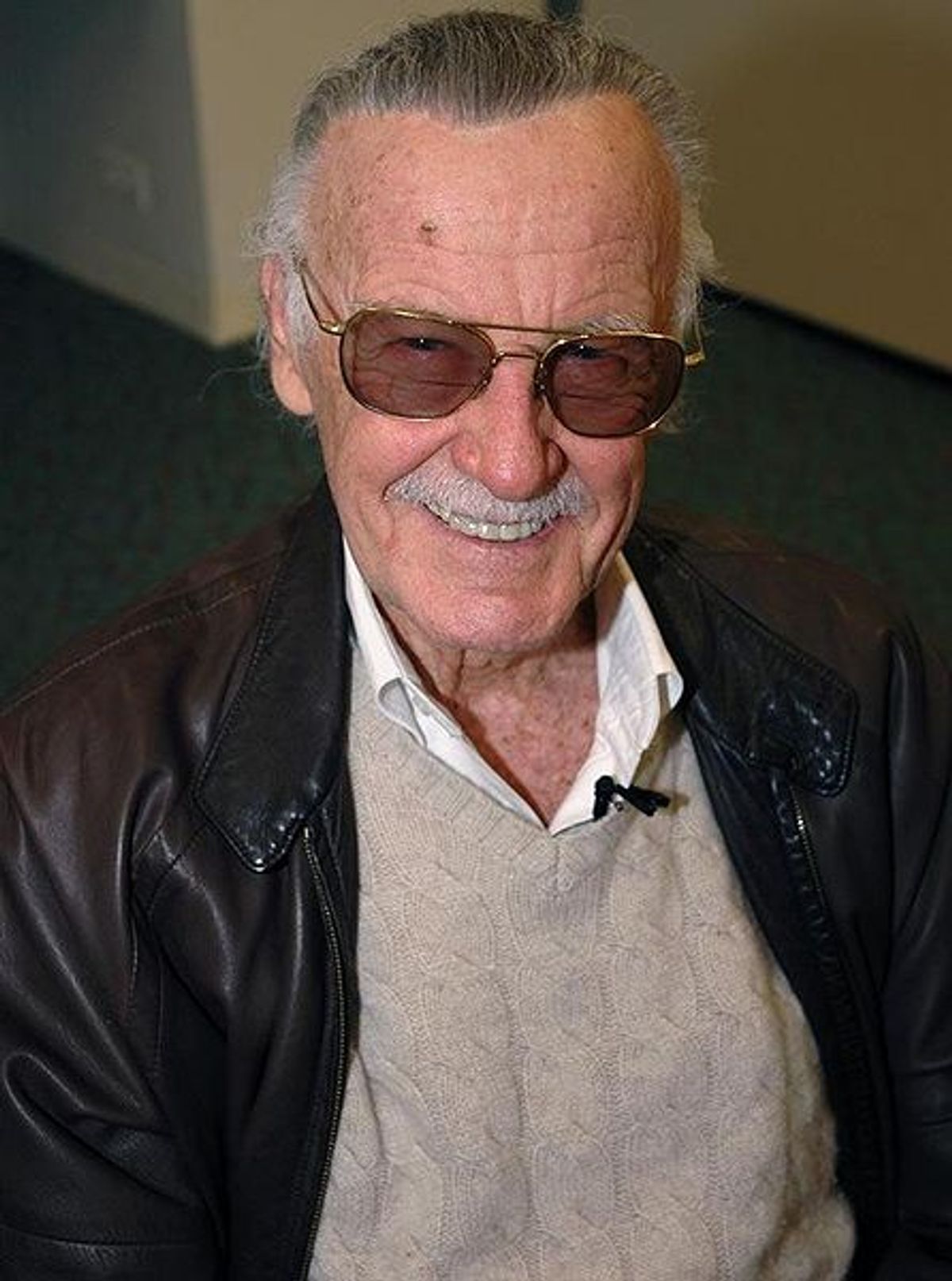 In this meta age of ours, in which Drunk Hulks and Feminist Hulks entertain on their own snarky Twitter feeds, it's only fitting that the Hulk's creator himself should also have his imitators. However, Fake Stan Lee isn't just relegated to 140 characters or less; he's a living, breathing person. (See the video below.)

It was Friday just before 2 p.m. I was in a large conference room on the upper level of the San Diego Convention Center at Comic-Con, waiting for the Stan Lee panel to start. I'd lucked out and got a seat only four rows back without having to wait in line for half the day. Seats are hard to come by at Comic-Con. Even a Thursday evening panel titled "Geek Girls Exist" had a line winding around the halls, and a guy got stabbed in the eye over a chair in the "Resident Evil: Afterlife" panel on Saturday. With a "Spartacus: Blood and Sand" panel (a show I actually watch) beginning right after Stan Lee's talk, I was camped out in Room 6BCF for the duration of the afternoon, bladder permitting.

But Stan "The Man" Lee meant a lot more to me than some Brutus Beekfcakes in skirts who eviscerate each other on pay cable. With the amount of Marvel Comics that I consumed since the age of 5, it felt like Lee's imagination had fueled my own. I might not be a writer today without Stan Lee. Every issue of "The Incredible Hulk," "The Amazing Spider-Man" and "The Fantastic Four" that I devoured in the 1970s had the words "Stan Lee Presents" on the top of the first page. Stan's shameless self-promotion let me know that being a writer, editor or publisher was a possibility.

At Comic-Con this weekend, Stan was hyping Marvel cartoons geared at kids and his more recent creation, Stripperella, for a somewhat older audience. "She strips at night and fights crime later at night," we were told moments before Stan's arrival.

As I waited for Stan, Fake Stan Lee entered the room. He was wearing a sweater vest over a blue dress shirt, had Stan's same receding hairline with an imitation mustache to match. But Fake Stan's act went beyond the limits of mere cosplay. He's a Stan Lee reenactor who never breaks character, not much different than the guys who play the part of Benjamin Franklin at certain historical sites in Philadelphia. Every word that Fake Stan utters is spoken with that same enthusiastic, New York-accented patter as the real thing.

There was an empty seat next to me so I waved Fake Stan over. He was glad to take the seat and even agreed to answer a few questions.

He replied with loving but pointed mockery of the former publisher of Marvel Comics, "Well, it's very interesting being Stan Lee because, as you know, I created 95 percent of the most popular comic books in the world," he said, "therefore everybody here should be paying tithe to me. So, everyone, please get out your wallets and hand forth some money, either $5 or $10. I think it's the smallest thing that you can do for all the enjoyment that I've brought you over the years."

I asked Fake Stan if the universe would explode if he shook the real Stan's hand.

"Prob-a-bly," he answered with emphasis on each syllable.

When I asked if he escaped from the Negative Zone with the "Fantastic Four" villain called Blastarr the Living Bomburst, he claimed not to know who Blastarr was.

"But you created him!" I exclaimed.

A crowd gathered around to watch me ask Fake Stan stupid questions with him giving equally inane answers. People sitting around us laughed when I asked him if he was ever tempted to earn some extra scratch by impersonating Hal Linden in the role of Barney Miller. He did look a little like Linden.

"I see what you're doing, and I like the reference," he said, "You're a good man and you're very smart."

Sometime during this tête-à-tête, a well-stacked model showed up in a Stripperella costume. Somebody had a poster of Stan Lee kissing Stripperella and now the crowd wanted Fake Stan to kiss Fake Stripperella. Fake Stan got out of his seat and affected an old man's gait as he strolled up to Stripperella. With the crowd urging them on, the two embraced with maybe a reluctant peck on the cheek resulting as the proceedings started to resemble the last throes of a depressing bachelor party.

The attempt at Dionysian revelry ended before it could ever take off, and the Fake Stan returned to his seat right before the real Stan Lee took the stage.

At 87, Lee still possessed the same level of energy (boundless) that he'd displayed in any TV appearances that I could recall from the 1970s. A chair was set up on the stage for him, but he stood at the podium and gestured frantically throughout much of his talk. Lee began with a tale of alter egos worthy of one of his costumed crime fighters.

"I used to have a real name, not something silly like Stan Lee," Lee said from the stage. "I used Stanley Martin Lieber, a real name!"

Looking at Fake Stan Lee fidgeting in his seat, this was too much to process as I came to the realization that there wasn't a "real" Stan Lee. Stan Lee was the world-renowned hero, with Stanley Martin Lieber relegated to being the nerdy, Peter Parker-like secret identity.

Lee had his reasons, however. He used an alias when he first broke into the comics business in the early 1940s because "people had no respect for comics in those days."

"They didn't consider them an art form," Lee explained. "They thought they were things that were read by dumb rubes or moronic children."

"Today it's different," Lee continued. "Today, somebody says, 'Hey isn't that Stan Lee over there?'"

Lee paused for a minute before adding to his hypothetical fan, "Excuse me President Obama, I'll be back in a minute." At that moment, the hall erupted with laughter.

"It got so complicated that finally my wife decided, let's just change it to Lee so now we're Joan Lee and Stan Lee," he explained. "I still like Stanley Martin Leiber but when I sign autographs, this makes it easier."

But even after the transformation into Stan Lee, circumstances in his pulpy corner still forced him to conceal his identity like Tony Stark putting on his suit of armor to become Iron Man.

"I was probably the top romance writer in the world," he said. "We weren't very creative with the titles. We had books called 'My Romance,' 'Her Romance,' 'Their Romance,' 'Romantic Romances' and on like that. I wrote them all."

The problem for Lee was that the books were written in a first-person, confessional style from a woman's point of view.

"I'm used to signing my name to everything I write," he said, "but it couldn't say, 'I Remember When I Was 16 and I Fell in Love With the First Boy I Met' by Stan Lee. I didn't want to leave my name and I didn't want to use someone else's name. I wouldn't get the credit. I came up with probably the best idea I ever had. On every one of the stories, I had the name of the story that I would write, 'As told to Stan Lee.'"

As Lee launched into a tale of how the Comics Code Authority ordered him to decrease the size of a puff of smoke coming out of a six-shooter in an issue of 'Kid Colt Outlaw' because a bigger puff was "too violent," I asked the Fake Stan Lee if everything the other Stan said was true.

Last year at Comic-Con, Fake Stan played the dozens with dudes dressed up as Deadpool and Spider-Man. I kept expecting him to attempt the same with the man who was once Stanley Martin Lieber, but he never did. Soon after I asked Fake Stan that last question, he got up and left before the genuine, or at least the legal, Stan was made to reenact that cartoon kiss with the woman posing as Stripperella. Once again, the model in the mask and thigh-high boots with stiletto heels was urged by the crowd to plant a wet one on the face of Smilin' Stan Lee. Although she did it with a bit more feeling the second time around, I couldn't help feeling that I'd seen the whole thing before.