"True Blood" recap: Girls get even

Bill gets bloodied, Franklin gets pummeled and a surprise marriage is on its way 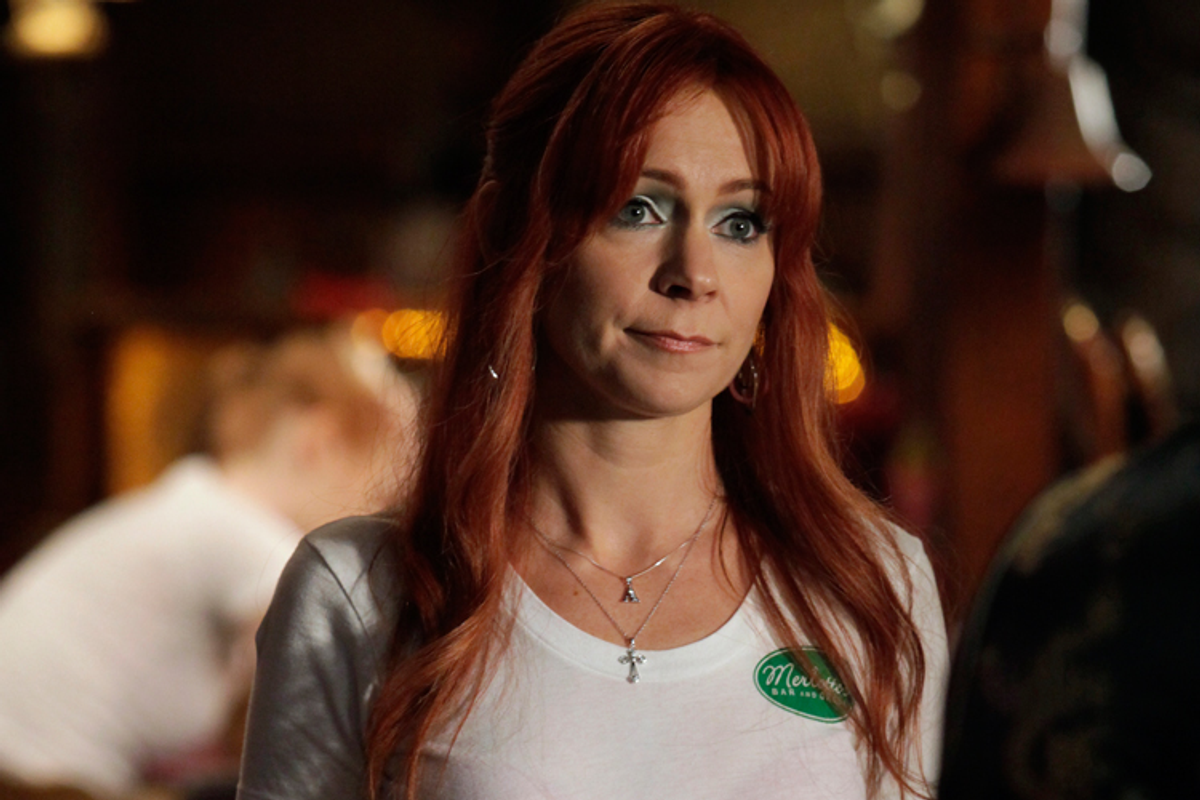 Sigh. Romance really doesn't last long in the soon-to-be-joined vampire kingdoms of Louisiana and Mississippi. It seems like just yesterday that Jason was pushing Crystal up against a tree in the moonlit swamp, Jesus and Lafayette were a cue ball away from a first kiss, Franklin and Tara were getting married, and Lorena was maniacally re-adjusting her head.

Sadly, by the end of this episode, Crystal is engaged to one of her meth-making cousins. It's over with Jesus, who hates drug dealers. Franklin's highly entertaining brain is mere pulp on a pillow. And Lorena is slowly carving up Bill's body, crying blood to the Billie Holiday version of "I Gotta Right To Sing The Blues," every minute looking more and more like a portrait by John Wayne Gacy as re-imagined by The House of Galliano.

On the bright side, for my feminist blogger friends who've been noticing that "True Blood" has been getting a little heavy handed in its violence towards women: ring, ring, hookers. This is the episode for you. Because nothing says "we're sorry women" like a whole hour of girl on boy beatings, torture, and general ass-kicking. Even the Were-Swayze will face the wrath of Sookie and Tara.

But first we must watch Bill leaping about trying to stake Russell with about as much success as a cat on steroids. "Are you serious?" Russell laughs, "I'm 3,000 years old!" right after he slams Bill into the ceiling with the power of his ancient vampire chi.

Eric has a much better strategy: pretending Sookie is a pet. He reminds Russell about "its" unusual powers. Sookie gets angry. "Oh look. It thinks it's our equal!" Eric laughs with convincing delight. Russell instructs the guards to take Bill to the slave quarters and orders Lorena to kill him. Sookie threatens to kill Lorena, who threatens to kill her back, and then wear her "rib cage as a hat."

Russell has some questions. So does Sookie. Russell finds this mildly entertaining. "There's a fine line between feisty and delusional." But answering her questions at least gives him the opportunity to show off Bill's dossier and let her know that Bill's arrival in Bon Temps was no serendipitous accident.

Meanwhile, over at the moonlit swamp, Crystal is making Jason feel "like a virgin," while he's making her feel like "110 per cent woman." Suddenly there's a sound. Crystal starts sniffing the air in a manner that suggests that she's probably only about 60 per cent woman, and 50 per cent who-the-hell-knows-what anymore. Jason remains, as always, 100 per cent Jason, when he bullies Kitch Maynard, abusing, some might say, his power as deputy liaison in training.

In the palace slave quarters, Lorena and Bill share a tender goodbye while she slices open his sternum with what seems to be some kind of custom made man slicing/giant manicure kit. Lorena opines about the 30s and what a "stylish" and "elegant" time it was (except, I guess, for The Depression). Bill wishes he could have seen her when her eyes still had some light, before the darkness took over he soul. Sniff. This is the most poignant slow, sadistic, painful death ever … until finally Cooter and Debbie show up to save Bill with a giant Band Aid! Oh, wait. That's just Debbie's pink bikini top, and they're mostly there to drink his blood and repeatedly kick him in the ribs.

It's a lot more fun upstairs where Franklin is entertaining Tara and his increasing army of fans (myself included) by prancing around in silk pajamas and insisting he will not "be policed." He's so hurt that she hasn't noticed that he's shaved. But if Tara's hurt from being restrained to the bed again, she's not showing it. She seduces him into releasing her so that she can suck his blood on her last night as a human. We learn the upside of fangs as Tara rips a sizeable chunk of Franklin's neck with those blunt human teeth of hers. This will look relatively less gruesome a few scenes later when she pounds his head in with a medieval morning star. Am I the only one with a strong hunch that Franklin will survive this and return crazier than ever?

Back in Bon Temps, Sam is trying to find out more about Tommy's scars, while they watch Nan Flanagan of The American Vampire League on TV. Sam goes back to Merlotte's, and Tommy and his mother discuss her days on "the circuit." When Arlene mentions the pit bull that the Mickens led out of their trailer, Sam puts four and four (as in total number of legs) together and decides they're using Tommy for dog fighting. He questions Andy, who is reticent to betray "inter-parish intelligence," but does anyways. Sam heads off to the nearest dogfights.

Russell and Eric head over to Sophie-Anne's. In the limo Russell reveals that his plan for world domination has a bit of an environmentalist edge, since only the vampires can remember how awesome the planet used to smell and how great humans used to taste. Russell questions Eric about his feelings for Sookie. Eric convinces Russell that he's gay, evidently jamming 3,000 years of gaydar with the power of his total hotness.

Sophie Anne, having now lost control of the V-dealing market, is busy reconstructing her wealth with scratch lottery tickets. (Who says vampires are all that much smarter than werewolves!)  Russell, for the umpteenth time, proposes a sexless power marriage. (Clinton Democrats?) But this is the first time he's had Eric to back him up. Eric is so angry that Sophie Anne has framed him for V dealing that he throws her down and threatens to twist her head off and throw it into the pool if she doesn't marry Russell. Yay! A Royal Vampire wedding! With that settled, Russell and Eric decide to sleep over at Sophie Anne's until sundown.

In theory this should leave the door open for Sookie to save Bill, while Tara meets up with Alcide. You wouldn't think Alcide would be an albino wolf, but this could be a  great look at the wedding. Ditto for the rib cage hat that Lorena might be wearing. The show closes as Lorena sinks her fangs into Sookie's neck. And so ends this special episode of "True Blood": violence against women, lite.

Tremendous odds are that Sookie will be fine. Probably she'll use her newfound blue electricity. Maybe Alcide will jump out from the shadows. But if it were up to me this would be the perfect time for a visit from Franklin, crazier and undeader than ever.