Fire up the blenders: Here are your most refreshing cold soups

Sweet, savory, fruity or creamy, here are the best ways to slurp your summer away 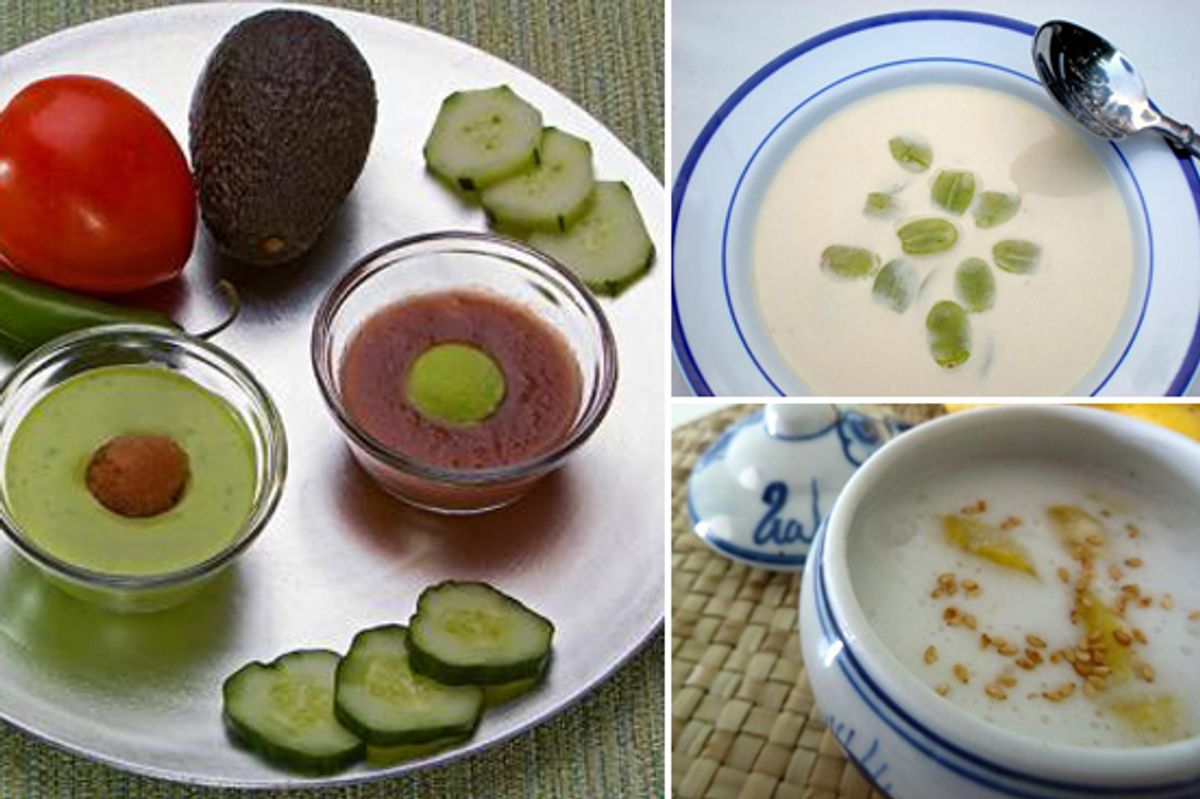 This week, we asked for your most refreshing cold soups.

Duo of Chile-Avocado and Mint-Tomato Soups by Felicia Lee: Well, there's a lot to be said for gilding the lily, and Felicia's duo of soups -- one spicy and creamy, the other tart and refreshing -- get extra fancy with frozen versions of themselves acting as garnishes. Keeping cool was never so interesting.

Chilled Almond Soup with Grapes (Gazpacho's Velvety Cousin) by Lucy Mercer: With all the inspired-by-gazpacho entries over the past few weeks, we'd been wondering when someone was going to take up the mantle of the tomato soup's less well known variant, sharp with vinegar and garlic and mellowed with a thick, rich purée of almonds. Lucy came to raise the flag for white gazpacho this week, and it's a doozy.

Banana Coconut Tapioca Dessert Soup by Linda Shiue: While it's true that Chinese cuisines are not known for their desserts, there is a rich tradition of sweet dessert soups that has a tough time in translation, filled as they are with beans, unusual funguses, and the occasional ingredient that really needs a euphemism. But Linda shares with us one of her accessible favorites, sweet coconut milk with slices of soft banana and fun little tapioca pearls.

PLUS, ALSO, TOO: THE EXCELLENT HONORABLE MENTIONS

Classic Gazpacho by I Am Surly: Ol' Surl-girl's a Spanophile, and for good reason -- after spending time in a Spanish village, she began to see a world that Dali saw, of magic and whimsy. The soup recipe she shares with us is from Penelope Casas, the great authority on Spanish food, and it is classic all the way -- with bread to thicken, a megaton of garlic for bite, and an unstoppable amount of olive oil for richness.

Ardo's Leek and Potato Cream Soup (Vichyssoise) by Designanator: Straight from a grandfather's disintegrating recipe folder, Designanator shares with us a classic soup with five ingredients and a lot of love.

Sweet-Tart Borscht by Lori Covington: Borscht is the soup with more variations than one might ever suspect. There are pureed ones and chunky ones, meaty ones and ones as light as a salad. Creamy ones and tart ones. Lori checks in with an elemental a borscht there is, one that leans towards the clean, fresh flavors of beets seasoned with brown sugar and spiked with tart vinegar.

Beet-Yogurt Borscht by Fusun Atalay: Fusun's version of this classic, puréed in the blender and smoothed out with yogurt, is dollhouse-pink and tart-creamy with yogurt and citrus, a balance of rich and refreshing.

Georgia Peach Purée by Lisa Kuebler: Straight to you from the state that has water towers shaped like peaches, here's a cold, sweet bowl of soup thickened with nectar and topped with raspberries.

Chilled Cucumber-Yogurt Soup by Sheba Marx: Back when "vegetarian" might as well have been a word in a foreign language, especially if you lived, like Sheba did, in Kansas, Mollie Katzen's Moosebook Cookbook became a lifesaver for generations of meat-shunners. This soup, which Sheba adapted to make thicker and richer, is a classic.

When the sweating is just prodigious and the sun is so fierce your hair is hot and heat stroke is just around the corner, only two words make it all seem worth it: tomato season. (That is, unless you're in the really unfortunate parts of the country where it gets too hot for tomatoes in the summer. Hats off to you.)

Tomatoes are one of the earth's most perfect foods: juicy, sweet, savory, and just packed with the meaty, satisfying aftertaste known as umami, they are unquestionably one of the world's favorite crops. I mean, their season is actually quite short -- two, maybe three months in most temperate climes, so it really says something that they are, year-round, one of the most ubiquitous foods. (Remember the Reagan era, when we tried to officially say that ketchup is a vegetable?)

So this week, we begin a celebration of the tomato, asking for your best dishes where the noble fruit is left either raw or cooked only lightly -- a quick simmer just to melt them, maybe, or a charring zap on the grill. (Next week we'll focus on long stews and sauces.)

Be sure to tag your posts: SKC light tomato (Please note that by participating, you're giving Salon permission to re-post your entry if it's chosen as a winner, and acknowledging that all words and images in your post are your own, unless explicitly stated. Adaptations of existing recipes are fine, but please let us know where the original comes from. And if you'd like to participate but not have your post considered for republication on Salon, please note it in the post itself. Thanks!)

Scores will be very scientific, given for appealing photos, interesting stories behind your submissions, creativity, execution and tomatoliciousness.