Obama should stop worrying and learn to love deficits 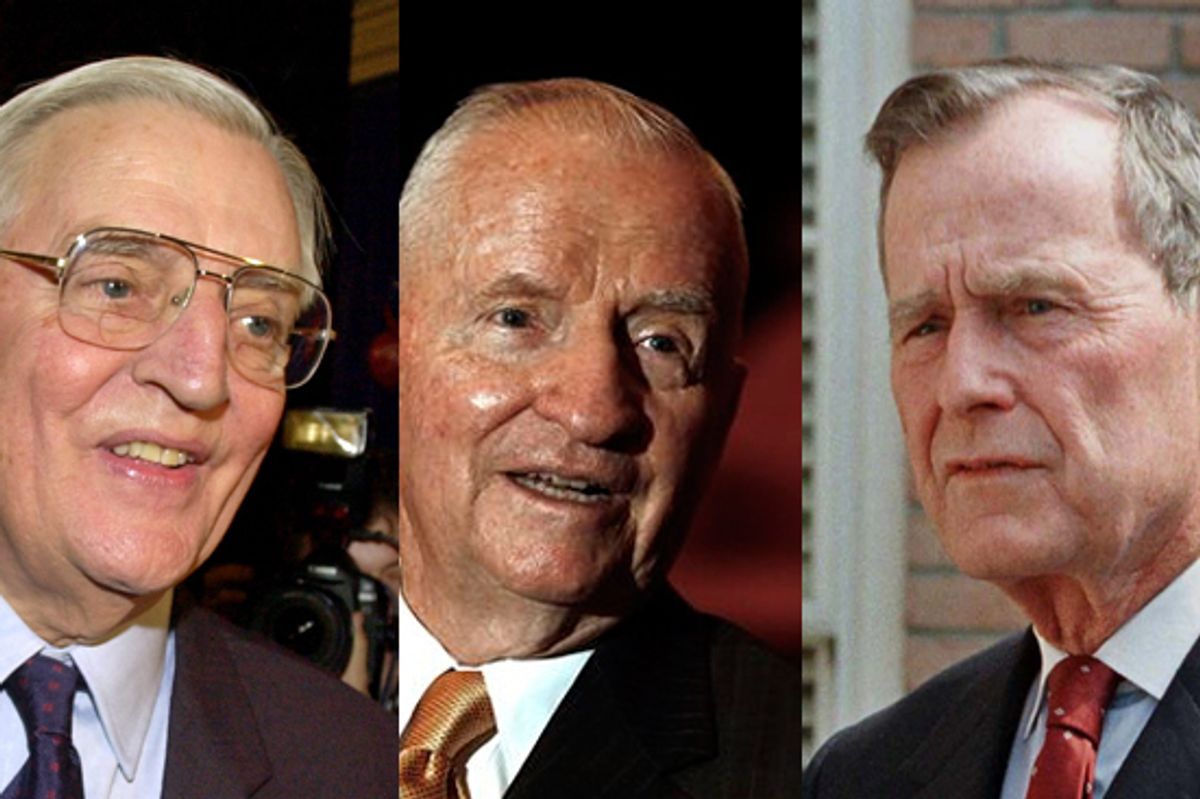 The examples of Walter Mondale, Ross Perot and George H.W. Bush tell us a lot about how budget deficits do -- and don't-- matter in politics
--

From a policy standpoint, the Obama administration may well be wise to push for an end to the Bush-era tax cuts for the wealthiest Americans. But the political calculation that’s animating its effort is pretty fishy.

On Sunday, Treasury Secretary Tim Geithner called letting the tax cuts expire the "responsible thing" to do, arguing that it would send an important signal that America is "willing as a country now to start to make some progress bringing down our long-term deficits."

His words, it immediately became clear, were part of a political strategy crafted by a White House that fears that its opponents are making headway with laments about soaring spending and exploding deficits. So, by linking the expiration of the tax cuts to the deficit, the Obama team figures it’ll demonstrate its own seriousness about tackling the debt while simultaneously highlighting the hollowness of the GOP’s rhetoric on the subject.

Here’s the problem: Voters, no matter what they tell pollsters, really don’t care that much about the deficit. In fact, if the 30-year history of modern deficit politics, ushered in by Ronald Reagan’s budget-busting tax cuts and military build-up, demonstrates anything it’s that the electorate’s sense of urgency about the deficit ebbs and flows with the economy. When times are tough, voters will express grave concern about deficits. But when the economy improves, they stop regarding it as a pressing matter -- even if the deficit is actually worsening.

Start with the dawn of the deficit era -- Reagan’s first term. From George Washington through Jimmy Carter, the United States had managed to rack up about $900 billion in total debt -- a total that Reagan nearly doubled in his first term. In the massive Reagan deficits, Democrats saw political gold. They made it their centerpiece issue, savaging the president for mortgaging the country’s future and -- well, basically, they said everything that the GOP is now saying about Obama and his program.

In 1981 and 1982, polls seemed to validate the Democratic strategy, with voters expressing increasing concern with rising deficits – and frustration with Reagan for his seeming inability (or unwillingness) to stop them. When Democrats made big gains in the 1982 midterms, there was wide agreement that the Reagan deficits had played a key role in fomenting public anger. As he prepared to challenge Reagan in 1984, Walter Mondale made clear that attacking the deficit would be one of his signature issues -- a strategy he reinforced with his bold declaration in his ’84 convention acceptance speech that he would raise taxes as president in order to whip the country’s books into shape.

If deficits really mattered to voters, Mondale should have won in a rout. After all, since the ’82 midterms, Reagan had piled on hundreds of billions more in debt -- and the projections for 1985 and 1986 were even worse. But something else had happened since the ’82 midterms: The jobless rate, then over 10 percent, had dropped to well under 8 percent, with further decreases on the horizon. The country was in recovery, and voters’ moods were lifting. Sure, they still told pollsters that they didn’t like deficits, but somehow it wasn’t such a priority to them anymore.

Walter F. Mondale has quietly decided on a strategic shift that blunts the issue of the Federal budget deficit and focuses on broader social and foreign policy themes.

The key aim of the shift, his advisers say, is to bolster Mr. Mondale's prospects among traditional Democrats and trade unionists leaning toward President Reagan, as well as among independent voters and young professionals who found the deficit issue difficult to grasp in a time of relative economic prosperity.

Another adviser said the lack of positive movement in the polls for Mr. Mondale in August and September, as he repeatedly discussed the deficit, had privately convinced some of his key aides that using the Federal debt as a major campaign issue was a political gamble that was not paying off.

A political adviser put it more bluntly. ''The deficit is not the premier issue it was,'' he said.

And so Fritz Mondale became the first politician of the Reagan era to discover the political fool’s gold that is the deficit. But he wasn’t the last.

When Reagan left the stage in 1989 (after tacking on about $1.75 trillion in new debt), his successor decided to make a meaningful effort to trim the annual deficit. Thus, George H.W. Bush caved on his “Read my lips” tax pledge and teamed up with the Democrats for a deficit-fighting package in 1990 -- a deal that proved to be the first step toward the surplus that would appear by the end of the decade.

But there was no reward for Bush, even as the deficit assumed a prominent role in the 1992 campaign. Decrying a debt that by then had cleared $4 trillion, two unlikely political stars were born that year: Paul Tsongas and Ross Perot. Each talked about generational responsibility and shared sacrifice and pledges to wage all-out war on the debt. They both fell short of victory, but they also both had more success than they were supposed to. Is this proof that the deficit actually did motivate voters in ’92? Nope. Keep in mind that:

* Bush, as noted above, actually did attack the debt with his ’90 budget deal, but was given no credit for this by voters who said deficits mattered most to them.

* Bill Clinton, who won the election, pushed an even more comprehensive attack on deficits in his first year as president, jamming a package of tax hikes and spending cuts through Congress by the slimmest of margins. But there was no political reward for this. Quite the opposite: Republicans used the “biggest tax increase in the history of the world” to rally voters in the 1994 midterm elections, which proved disastrous for Clinton and the Democrats.

So what did happen in 1992? It’s actually pretty easy. The economy was in the dumps and voter anxiety and frustration were high. Fear of deficits didn’t attract voters to Tsongas and Perot. But by framing the issue in moral terms, they both built images as righteous outsiders that were perfect for the year’s political climate. (A rough parallel can be drawn to John McCain and campaign finance reform in his 2000 campaign; the issue itself didn’t really matter to people, but what McCain’s embrace of it symbolized to voters did.)

Clinton, of course, ultimately did get credit for his 1993 budget, but not because the debt declined (even though it did) -- because the economy turned around.

And now, here we are again, all these years later. The economy is in a gruesome state and the president’s opponents are screaming that he’s spending too much and cutting too little -- and polls show voters seemingly agreeing with them. But the lesson of the last 30 years ought to be obvious for the White House: If you play along and attack the deficit, you will get no political payoff -- unless the economy rebounds.