Protest at megachurch that backs "Kill the gays" pastor

In a surprise move, the church's leaders invite some of the teenage protesters for a dialogue 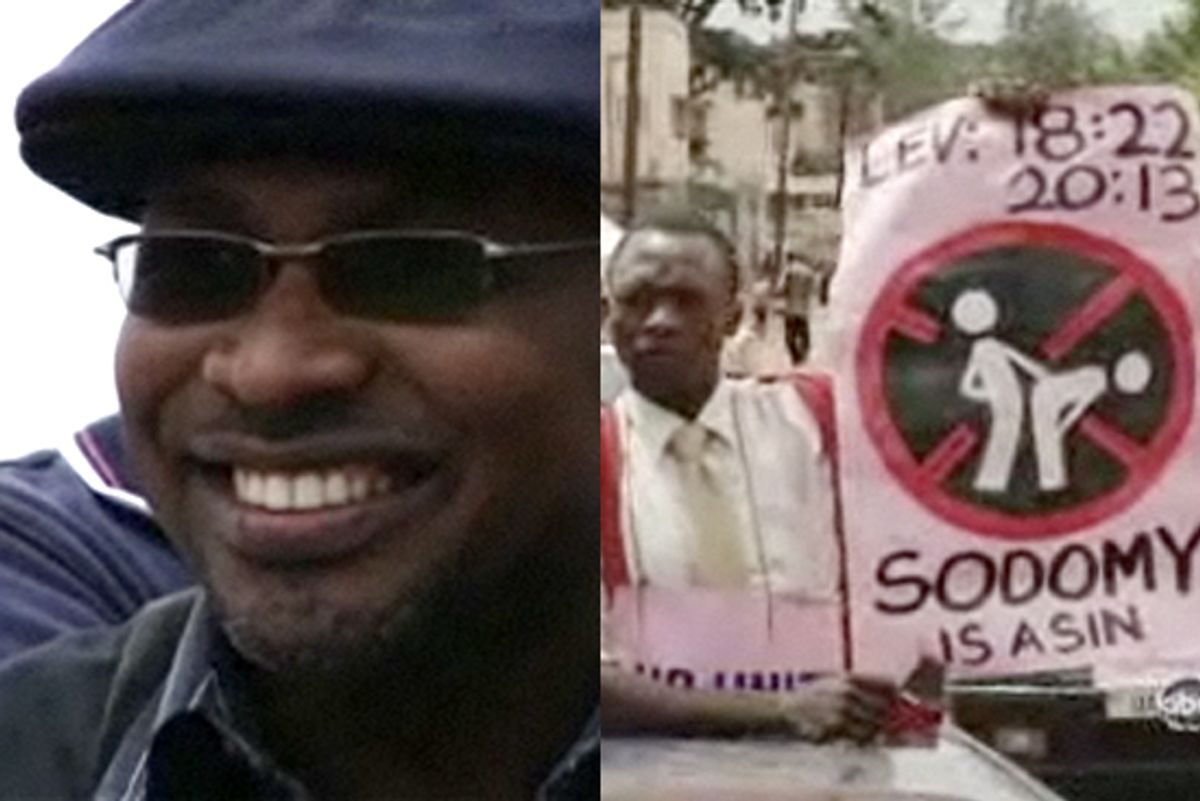 Martin Ssempa and a follower, right
--

On Sunday morning, a small band of teens protested outside of the Las Vegas megachurch whose financial support to Martin Ssempa, one of the most prominent instigators of Uganda's draconian "kill the gays" bill, has been detailed in a series of Salon articles.

Ssempa, who has said "homosexuals should absolutely not be included in Uganda's HIV/AIDS framework," was the prime focus of the protest outside Canyon Ridge Church, according to organizer Chase Cates.

After the second worship service, the teens were invited into the church for a dialogue during which, Cates says, Canyon Ridge's pastors acknowledged that Uganda's anti-gay bill provided penalties for consensual adult sexual behavior. Kevin Odor, one of the pastors, had publicly suggested that the bill only addresses "aggravated pedophilia."

Cates said he wanted to raise awareness about the Anti-Homosexuality Bill and said that "if this bill was passed and people were executed or criminalized in any way, Canyon Ridge Christian Church in turn would be held responsible for financing Ssempa who so overtly pushed the bill."

Cates, a Las Vegas man who will enter college in the fall, said the reaction from the church members was mostly positive. "After the second service, CRCC invited us to join members of the church to have an open discussion of the issue. We took them up on their offer and ended up having a two-hour conversation with Pastor [Mitch] Harrison and others," he said.

According to Harrison, "nine or so" protesters came into the church for the discussion. Harrison said the teens raised "concerns about the bill criminalizing homosexual behavior." He added, "Our goal in meeting with them wasn’t so much to express our opinions but to listen to their concerns and gain understanding."

It is unclear whether that understanding will signal a change in the church’s stance toward the controversial anti-gay bill.

As reported in Salon last week, Odor has previously said that  the Uganda bill has been misrepresented by unnamed media. The claim that it merely targets pedophiles seems to ignore current Ugandan law, which already covers pedophilic offenses. In addition to replicating additional statutes on the abuse of children, the proposed bill includes the death sentence for HIV-positive people who engage in homosexual behavior and life in prison for non-HIV-positive gays. There have been rumors of amendments to the bill, but none have been publicly published or discussed in the Ugandan parliament.

According to Cates, the pastors promised to contact Ssempa and convey the group’s concerns. Cates said that the protesters ranged in age from 15 to 19 and "most of them were straight" and concerned about the impact of the Ugandan proposal. Cates said he hopes the church can influence Ssempa to change his stance or convince the church to stop sending offerings to support the anti-gay campaign.