Careful what you wish for, progressives

Sarah Palin would be a cinch to defeat in 2012. But her nomination by the GOP could still have dire consequences 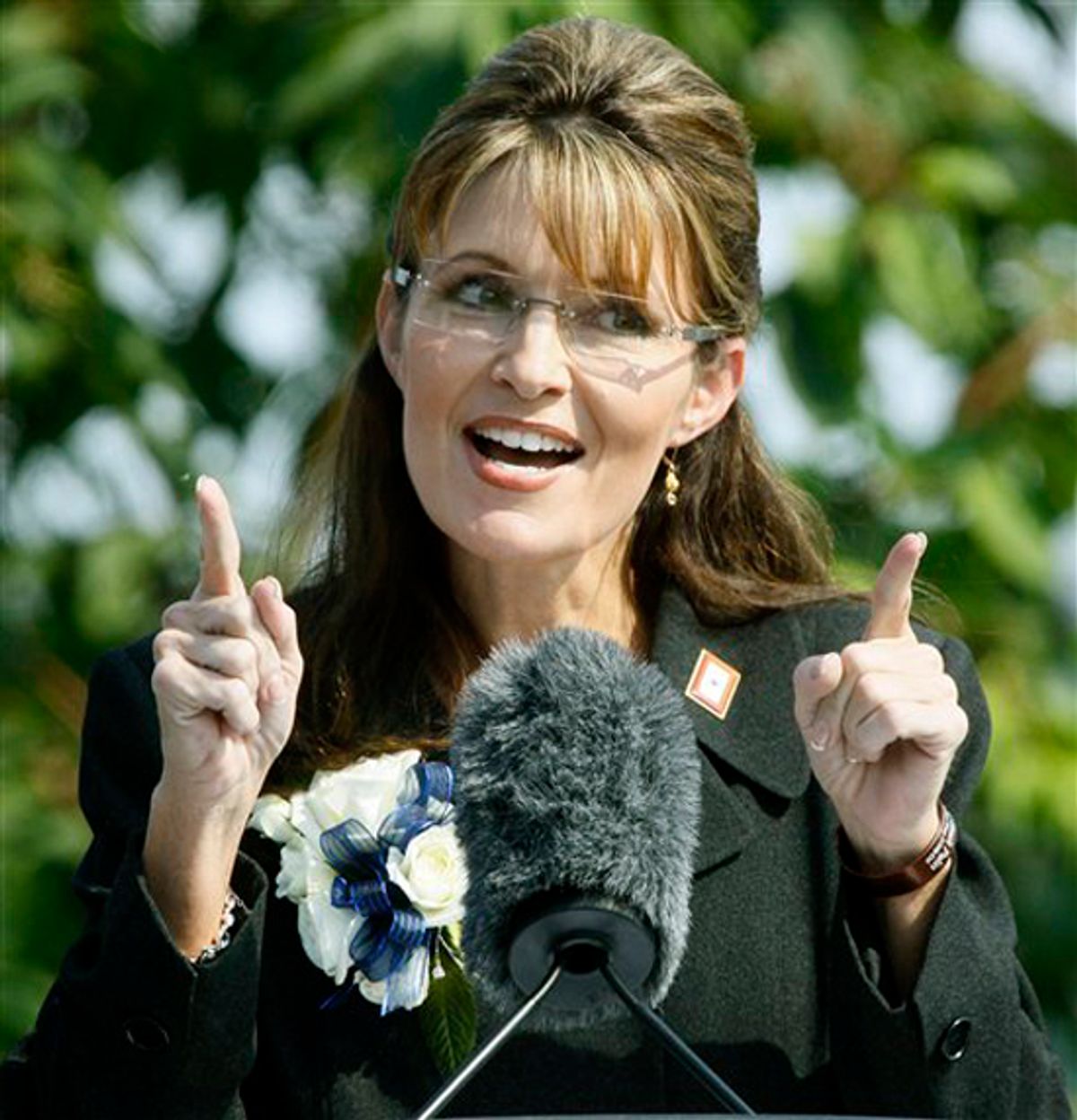 FILE - In this July 26, 2009 file photo shows Alaska Gov. Sarah Palin gestures while giving her resignation speech in Fairbanks, Alaska. A year after her abrupt resignation as Alaska governor, Palin has evolved into a political personality writ large, commanding weeks of headlines for a single Facebook observation _ see health care "death panels" _ and six-figure speaking fees from groups clamoring for her words. Going rogue with a best-selling memoir only added to her aura among the conservative faithful and she has easily eclipsed other Republicans as the coveted endorsement this election year. (AP Photo/Al Grillo, file ) (Al Grillo)
--

Sarah Palin may be more unpopular than ever before, but if she chooses to run for the Republican nomination in the 2012 presidential race, she can at least count on bipartisan support. In fact, according to a straw poll at this year’s Netroots Nation -- the massive progressive bacchanal held last weekend in Las Vegas -- a substantial plurality of conference attendees wants the half-term Alaskan governor to be President Obama’s general election opponent.

It’s not hard to figure out why: Even Obama’s harshest critics on the left almost unanimously favor him against any possible Republican challenger, and Palin’s candidacy would make 2012 look less like an election than a massacre. It’s not just Obama who would profit, either; his opponent would be such a drag on down-ticket Republican candidates that one could say she represents the Democratic Party’s best hope of undoing the damage they’re sure to incur this November.

Palin allies such as Rush Limbaugh often claim that liberals vilify Palin because they’re afraid of her, but there’s really no way to reconcile that assertion with the outcome of the N.N. straw poll. If anything, the numbers tell us, liberals aren't afraid enough.

I don’t mean to suggest that liberals underestimate Palin’s electoral fortunes; they are, truly, quite grim. The true danger is not that Palin would ever seize the White House, but rather what her nomination would mean for political discourse and basic stability in this country.

A democracy, after all, must be founded on broad consensus regarding certain social norms. That does not mean there is no room for disagreement over policy and philosophy within that broad framework -- indeed, that is an obvious feature, not a bug, of representative democracy -- but that these disagreements, no matter how fervent and profound they may become, must take place between parties that share a mutual commitment to the liberal democratic system (as in the system stemming from the philosophical tradition of classical liberalism, not modern political liberalism).

To try to enforce this sort of ideological commitment through law would, paradoxically, undermine liberal democracy itself, which is why enforcement is instead left to social taboo and the electoral process itself. So candidates for office who hold distinctly illiberal, anti-democratic views -- such as those who, for example, call for armed overthrow of their government, or the assassination of their political opponents -- are expected to be voted into unemployment, thereby providing a strong incentive for career politicians to all behave more or less like reasonable adults, regardless of their differences.

This is the sort of ideal theory that’s never functioned perfectly, but recently it’s been particularly bad. The tendency of the Republican Party under President Bush (and sadly, more recently, the DNC under Obama) to equate reasonable criticism of the administration’s war effort with treason pales in comparison with the remarks of Sharron Angle, Republican nominee from Nevada in this cycle’s most prominent Senate race: This is a woman who was nominated by a major party to run for the upper chamber of Congress despite having winked heavily and repeatedly at the possibility of armed insurrection and the assassination of her opponent.

Of course, if Angle loses (and she probably will), no one thinks she’s going to follow through on her violent rhetoric. That’s not really the point; rather, the true fear here is that someone else might. When veiled incitements to violence become mainstream, it’s statistically inevitable that a handful of unhinged loners will attempt to follow through on them. There is, after all, a reason why right-wing violence trended upward after Obama’s election.

But if you think it’s bad now, wait until you see what happens if the plurality of N.N. attendees see their wish granted. Palin has already demonstrated a disturbing willingness to frame even minor political squabbles in terms of "tyranny" versus "liberty," and to make her a major party’s presidential candidate would only do more to throw the spotlight on that sort of incitement. Perhaps, as Kevin Drum prays, the GOP would then "go down to such an epic defeat that they finally get some sense knocked into them." But in the meantime, we would be facing a long, protracted campaign in which both a major political party and the mainstream press would treat violently anti-democratic positions as existing within the confines of reasonable political discourse. We’ve already had quite a bit of that over the past few years; accommodating and encouraging it could potentially make things much, much worse.