Yes, you can jailbreak your phone

Federal ruling allows slightly more freedom to use what you've bought the way you want, but much more is needed 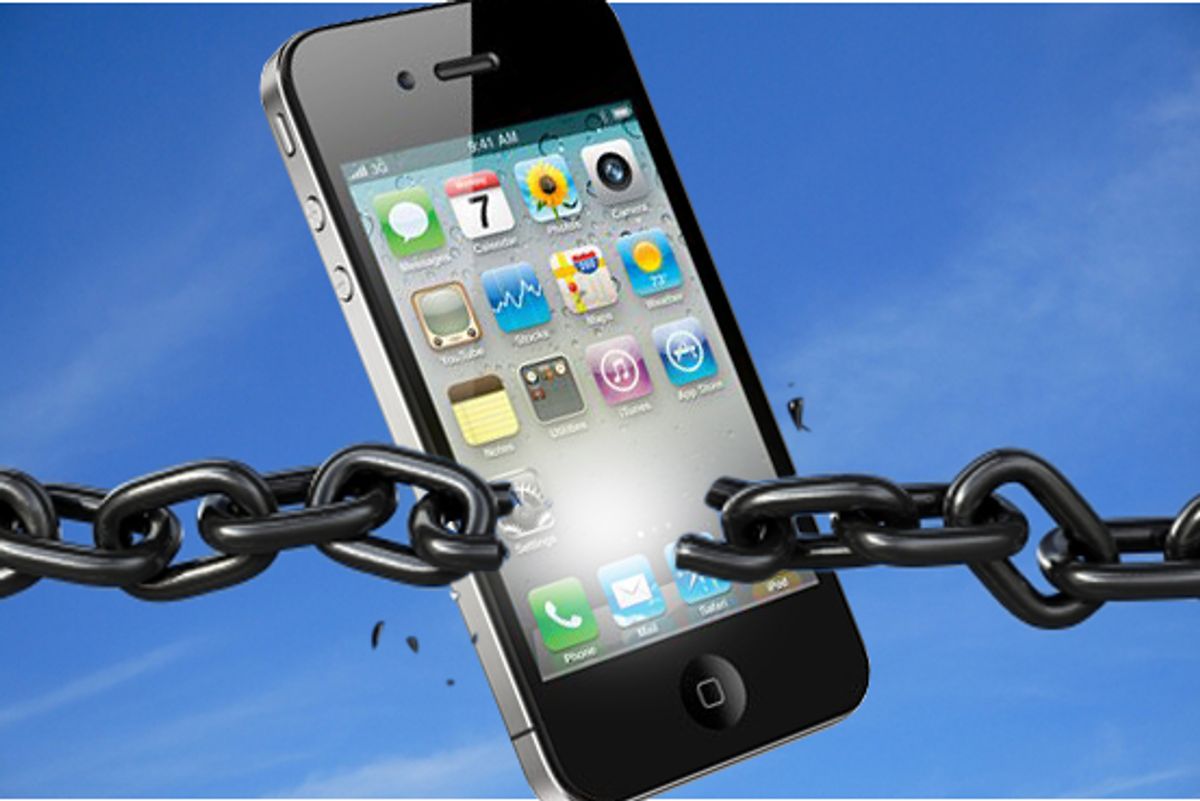 Good news in the copyright world is rare, but we have a couple of small victories to celebrate this week. The bad news: They only emphasize how grossly unbalanced our system remains.

These wins for customer freedom center around a technology broadly known as DRM, which stands for Digital Rights Management -- methods used by hardware and software companies to allow customers only certain rights. It should more properly be called Digital Restrictions Management, because that's the real aim of DRM. People have found ways to break or work around DRM, but federal law makes it illegal to do so in most circumstances.

The cracks in DRM's legal facade are starting to grow, too. On Monday, the Copyright Office and librarian of Congress said, among other things, that it's OK to A) "jailbreak" your phone, thereby letting you install software not approved by the phone seller; and B) use brief excerpts of DVD videos in other works. Renewing a previously granted exception to federal copyright law, the office also said it was OK to unlock your phone so that you can use it with a different mobile network.

The exceptions are still fairly narrow, to be sure, and how widely they'll be used remains to be seen given the way our mobile phone and media markets work in the real world. But they're notable in several ways.

One is the language the Librarian of Congress, James Billington, used in his rulemaking document (1.5MB PDF). For example, he called the act of jailbreaking a phone "innocuous at worst and beneficial at best."

Industry arguments against these exceptions, for which the Electronic Frontier Foundation had led the fight, had been laugh-out-loud ridiculous. Apple, you'll be unsurprised to hear, took the hardest-line stance against the concept that customers should have the right to use the devices they've purchased as they see fit.

Apple's objections ultimately came down to its insistence that customer freedoms would "undercut the overall iPhone experience" (emphasis from the original document filed in the case). In other words, you should only be able to use the iPhone, which is nothing more than a handheld computer connected to digital networks -- albeit a wonderfully designed device -- in precisely the ways Apple determines.

Having lost in the Copyright Office, Apple responded with typical arrogance, telling the Cult of Mac blog that it might now be legal to use your iPhone the way you want to, but you'll void the warranty if you do. And you can expect Apple to keep up its cat-and-mouse game of using software updates to screw up jailbroken phones, as the iPhone Dev-Team -- leaders of the jailbreaking movement -- are warning.

The continued ability to unlock your phone and use it on a competing network isn't much help, because of the insanity of America's competing mobile standards. Even if you unlock a newer iPhone, you can't use it to its maximum capabilities on Verizon, Sprint or T-Mobile because of various radio and chip incompatibilites.

But if you travel overseas frequently, unlocking your GSM-based AT&T or T-Mobile phone will be nontrivial (assuming it isn't already unlocked, as mine is). You can use local SIM cards in many countries and save a huge amount of money.

The other important move by the Copyright Office was to allow people to remix videos in other works. Essentially, the copyright officials observed that it was ridiculous to believe that we're all but forbidden from quoting from others' creative work just because it's in a DRM'd video format.

Unfortunately, this exception is way too narrow in the real world. It allows circumvention of the DRM solely for:

In other words, it's still not allowed to quote from another video work for commercial use (other than in a documentary). This is nuts. If authors had to get permission from every writer or publisher whose work they intended to quote, scholarship and journalism would grind to a halt.

The copyright office's exemptions also included the right to bypass computer system dongles that are broken or obsolete; a research exception for studying video game security; and read-aloud functions in e-books if not provided by the publisher.

Again, we shouldn't overstate the value of Monday's ruling. The law remains horribly unbalanced in favor of the copyright holders. But any progress is helpful.

(Note: I've donated money to the EFF, an organization that is leading the way in preserving and enhancing our digital freedoms. Also, in 2002 the EFF honored me with one of its Pioneer awards.)