The White House says the professor is "very confirmable." But we're still waiting for a declaration of war 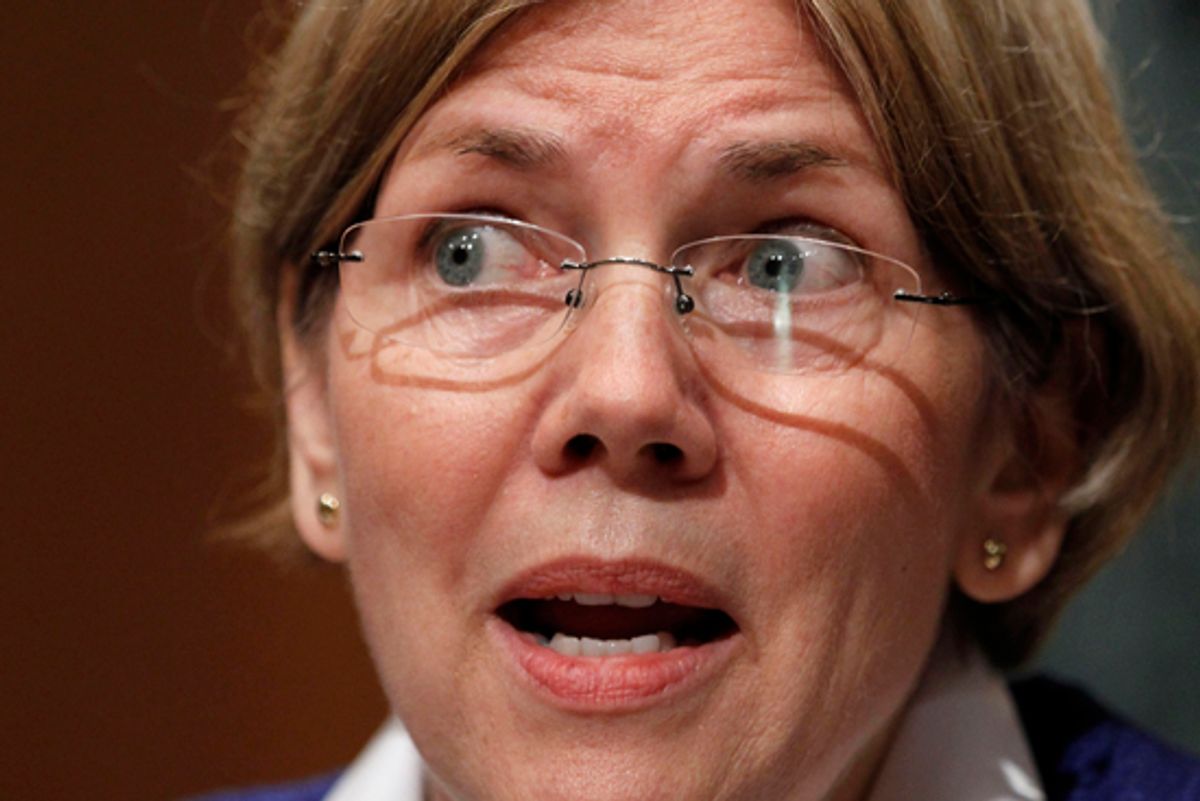 Paul Krugman says he doesn't understand why the Obama administration is "waffling" on the nomination of Elizabeth Warren to run the Consumer Financial Protection Bureau. I wish he'd provided a link to said waffling, because I've personally been surprised by how strongly various representatives of the White House have been supporting her in recent days.

On Monday, press secretary Robert Gibbs dismissed concerns that Warren might not be confirmable:

"Elizabeth Warren is a terrific candidate. I don't think any criticism in any way by anybody would disqualify her and I think she's very confirmable for this job."

Treasury Secretary Geithner was even more effusive on Charlie Rose:

Treasury Secretary Timothy Geithner: "She is an incredibly capable effective advocate for reform. She was way ahead of her time -- way ahead of the country -- in pointing out what was actually happening in the credit business. All the bad stuff that was happening. The looming housing crisis. She was pioneering in pointing out those risks. And she is the most effective advocate of reform we have in the country on these questions. And obviously I think she would do a great job in that position."

Charlie Rose: "She has the qualities you are looking for?"

Geithner: "Absolutely. Without a doubt."

Sure, it's possible that behind the scenes Geithner is fighting viciously to block a Warren appointment. But with every public statement lauding Warren to the skies, the administration boxes itself even further. At this point, I can't think of a single thing the White House could do that would be more demoralizing to its base than to keep tellling us how great Warren is and then decide not to nominate her.

But let's make no mistake here: If the White House is waffling, the reason is also obvious. There is simply no guarantee that this fight will be won. Wall Street despises her, and the bankers are making no attempt to hide their hatred.

Ryan Chittum points us to a Reuters story with two illustrative quotes:

"I get disgusted every time I hear her speak. It's like she's sitting in some ivory tower, not understanding the ramifications of anything she says," said Anton Schutz, president of Mendon Capital Advisors. "Any person you put in that role really ought to have some industry experience."

"I don't think she can run that new agency in a fair, balanced way where she can listen to all the constituencies, not just the consumer advocates," said Alan Kaplinsky, a lawyer for Ballard Spahr, who advises banks and consumer financial companies.

What Schutz and Kaplinsky are really saying is that Warren can't be co-opted by the constituencies that she is supposed to regulate. Which makes her the perfect person for the job!

But the very fact that she's the perfect person for the job means that she will be bitterly opposed -- and the Senate math, as always, is grim. My guess is she won't get 60 votes, and will only attain the job through a temporary recess appointment.

It might be reasonable to ask whether a recess appointee could be effective at building a brand-new agency from scratch. But even to ask that question ignores the underlying truth that the fight over Warren is not really a fight over the operational efficiency of the CFPB. It's a fight over symbolism. The left wants Obama to shed his normal caution and declare "damn the torpedoes, full speed ahead!"

That's a pretty big step. I'd make sure to get all my ducks in a row before commencing fire.

UPDATE: The New Republic's Noam Scheiber crunches the math and makes a surprisingly positive case for a Warren confirmation, possibly even without a fight!

LATER UPDATE: Sen. Chris Dodd, however, who as chair of the Senate Banking Committee would be crucial to any confirmation fight, is more pessimistic than ever.