Two Americans among victims as cause of disaster remains a mystery. No survivors 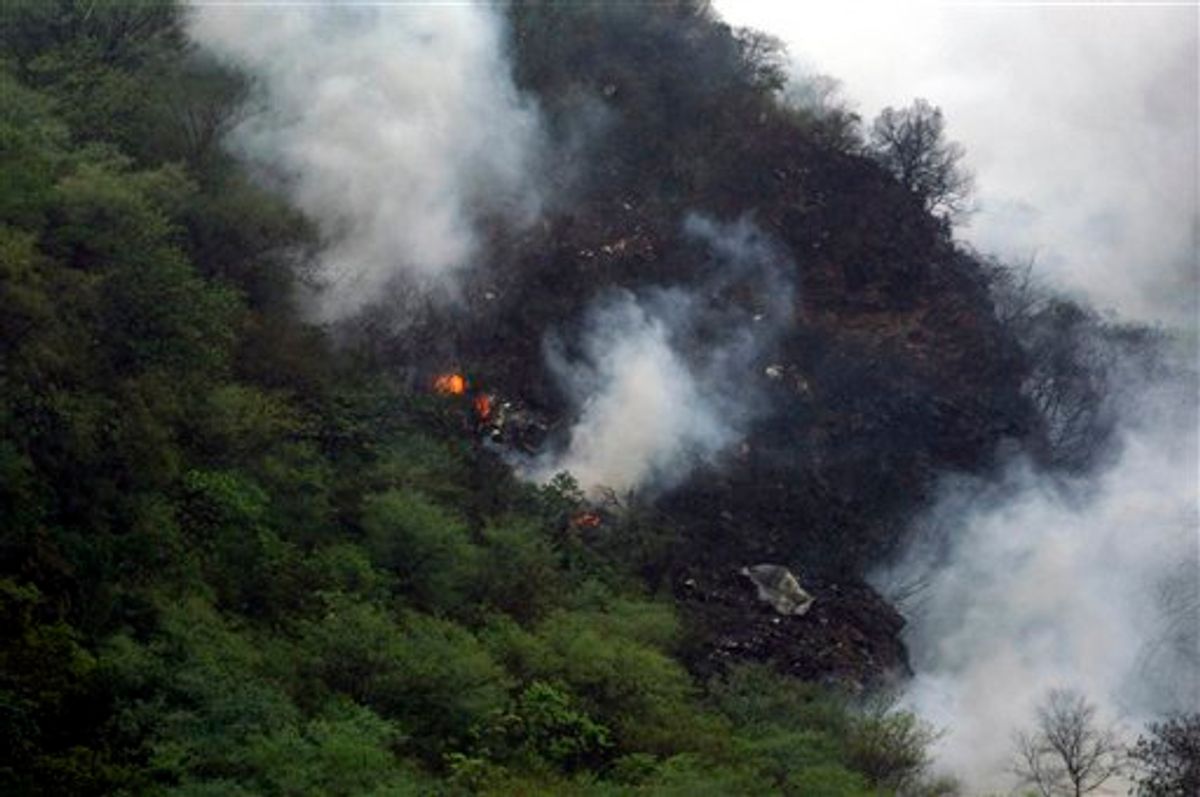 In this photo released by China's Xinhua News Agency, smoke rises from the site of a plane crash near Islamabad, Pakistan, Wednesday, July 28, 2010. The passenger jet carrying 152 people crashed into the hills surrounding Pakistan's capital amid rain Wednesday, officials said. According to a Pakistani government official over two dozen bodies have been recovered from the site, but many more were feared dead, while several passengers have been rescued. (AP Photo/Xinhua, Zeeshan Iyazi) NO SALES (AP)
--

ISLAMABAD (AP) -- The U.S. Embassy says two American citizens were among the 152 people killed in a plane crash in the hills surrounding Pakistan's capital.

The cause of Wednesday's Airblue crash was not immediately clear. It attempted to land in rainy and cloudy conditions.

Initial Interior Ministry reports that five people survived the Airblue crash were wrong, said Imtiaz Elahi, chairman of the Capital Development Authority, which deals with emergencies and reports to the ministry.

"The situation at the site of the crash is heartbreaking," Elahi told The Associated Press. "It is a great tragedy, and I confirm it with pain that there are no survivors."

Local TV footage showed twisted metal wreckage hanging from trees and scattered across the ground on a bed of broken branches. Fire was visible and smoke rose from the scene as a helicopter hovered above. The army said it was sending special troops to aid the search.

"I'm seeing only body parts," Dawar Adnan, a rescue worker with the Pakistan Red Crescent, told the AP by telephone from the crash site. "This is a very horrible scene. We have scanned almost all the area, but there is no chance of any survivors."

The search effort was hampered by muddy conditions and smoldering wreckage that authorities were having trouble extinguishing by helicopter, Adnan said.

The cause of the crash was not immediately clear, but Defense Minister Chaudhry Ahmed Mukhtar said the government does not suspect terrorism.

The plane left the southern city of Karachi at 7:45 a.m. for a two-hour scheduled flight to Islamabad and was trying to land during cloudy and rainy weather, said Pervez George, a civil aviation official.

Airblue is a private service based in Karachi, Pakistan's largest city, and Wednesday's flight was believed to be carrying mostly Pakistanis.

"The plane was about to land at the Islamabad airport when it lost contact with the control tower, and later we learned that the plane had crashed," said George, adding the model was an Airbus 321 and the flight number was ED202.

The crash site covered a large area on both sides of the hills, including a section behind Faisal Mosque, one of Islamabad's most prominent landmarks, and not far from the Daman-e-Koh resort.

At the Islamabad airport, hundreds of friends and relatives of those on board the flight swarmed ticket counters desperately seeking information. A large cluster of people also surrounded a passenger list posted near the Airblue ticket counter.

Saqlain Altaf told Pakistan's ARY news channel he was on a family outing in the hills when he saw the plane looking unsteady in the air. "The plane had lost balance, and then we saw it going down," he said, adding he heard the crash.

Officials at first thought it was a small plane, but later revised that. George said 146 passengers were on the flight along with six crew members.

The Pakistan Airline Pilot Association said the plane appeared to have strayed off course, possibly because of the poor weather.

Raheel Ahmed, a spokesman for the airline, said an investigation would be launched into the cause of the crash. The plane had no known technical issues, and the pilots did not send any emergency signals, Ahmed said.

Airbus said it would provide technical assistance to Pakistani authorities responsible for the investigation. The aircraft was initially delivered in 2000, and was leased to Airblue in January 2006. It accumulated about 34,000 flight hours during some 13,500 flights, it said.

The last major plane crash in Pakistan was in July 2006 when a Fokker F-27 twin-engine aircraft operated by Pakistan International Airlines slammed into a wheat field on the outskirts of the central Pakistani city of Multan, killing all 45 people on board.

Airblue flies within Pakistan as well as internationally to the United Arab Emirates, Oman and the United Kingdom.

The only previous recorded accident for Airblue, a carrier that began flying in 2004, was a tail-strike in May 2008 at Quetta airport by one of the airline's Airbus 321 jets. There were no casualties and damage was minimal, according to the U.S.-based Aviation Safety Network.

The Airbus 320 family of medium-range jets, which includes the 321 model that crashed Wednesday, is one of the most popular in the world, with about 4,000 jets delivered since deliveries began in 1988.

Twenty-one of the aircraft have been lost in accidents since then, according to the Aviation Safety Network's database. The deadliest was a 2007 crash at landing in Sao Paolo by Brazil's TAM airline, in which all 187 people on board perished, along with 12 others on the ground.

Associated Press Aviation Writer Slobodan Lekic in Brussels, as well as AP Writers Ashraf Khan in Karachi and Zarar Khan in Islamabad contributed to this report.