Fox Democrats accuse Obama of doing what Fox does 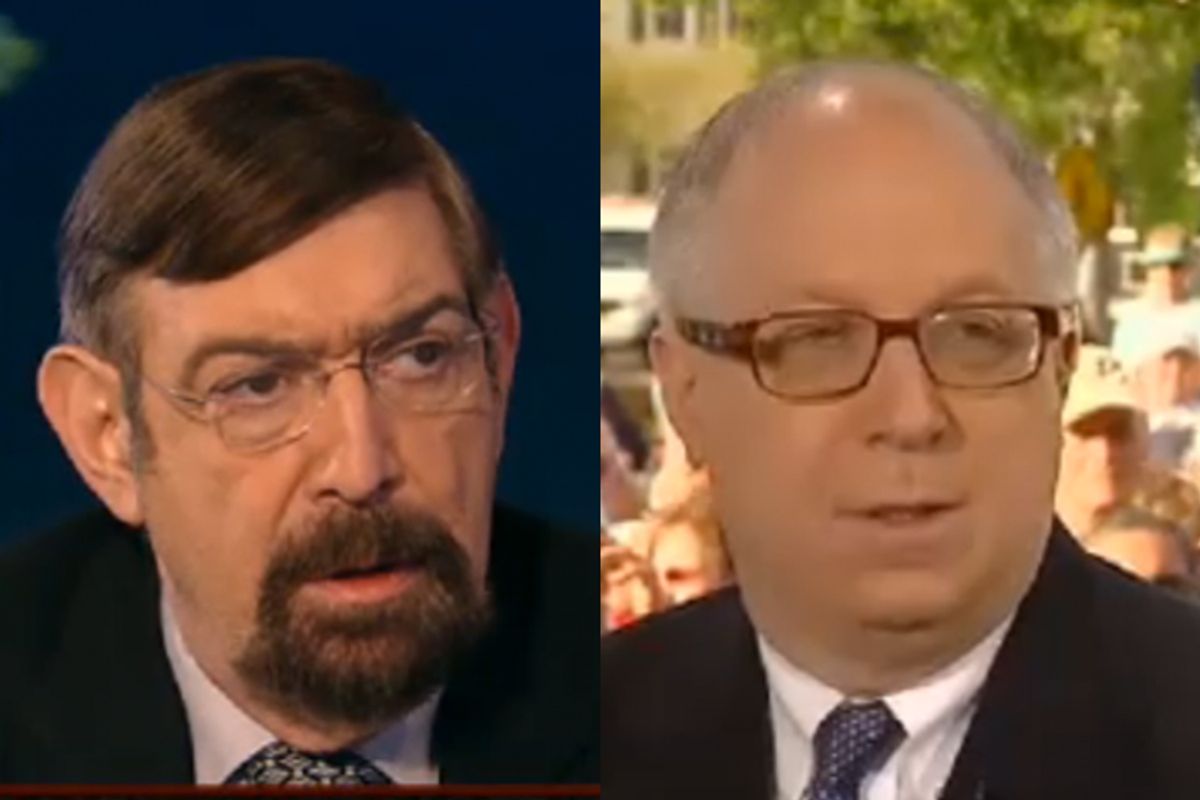 Official Fox News Democrats-in-residence Pat Caddell and Doug Schoen got together to write one of their op-eds about how the Democrats are Bad and Wrong. As usual, the reasons given for the Badness and Wrongness of Democrats are exactly the same ones named by right-wing talk radio hosts and bloggers and Fox News hosts -- but because the authors of the op-ed are Democrats, it is newsworthy!

According to Schoen and Caddell, President Obama "has divided America on the basis of race, class and partisanship." And "his cynical approach to governance has encouraged his allies to pursue a similar strategy of racially divisive politics on his behalf. "

This is so transparently an example of the Breitbart tactic -- accusing your political opponent of doing what you yourself are guilty of -- that it is scarcely worth treating it as an argument worthy of close examination. But for the hell of it, let's examine their evidence.

The first hint that as president Mr. Obama would be willing to interject race into the political dialogue came last July, when he jumped to conclusions about the confrontation between Harvard Prof. Henry Louis "Skip" Gates and the Cambridge police.

During a press conference, the president said that the "Cambridge police acted stupidly," and he went on to link the arrest with the "long history in this country of African-Americans and Latinos being stopped by law enforcement disproportionately."

In truth, the Gates incident appears to have had nothing to do with race—a Cambridge review committee that investigated the incident ruled on June 30 that there was fault on both sides.

Barack Obama's friend was arrested, in his own home, for the crime of yelling at a cop who was arresting him. Obama "interjected race into the political dialogue" by responding to a direct question about that arrest by repeatedly asserting that while he didn't know all the facts yet, he thought it was stupid of a police officer to arrest a man after being presented with proof that the man was in his own home. Also -- " separate and apart from this incident," in the president's words, which are worth rereading in their original context -- there is this history of unfair treatment of minorities by the police. I am sure that two genuine liberal Democrats would not disagree with that fact -- it is, after all, a fact -- but perhaps in the interests of uniting the nation, you are just not supposed to say it.

According to Republican Senator John Kyl, Obama told him that he would not secure the border until Congress moved on immigration reform. "That's another indication Mr. Obama is willing to continue to play politics with hot-button issues," according to Schoen and Caddell.

This is the best example yet, because it is something that has nothing to do with the Obama administration, except that conservatives are explicitly and shamelessly race-baiting in an attempt to damage the administration. There are some clowns who call themselves "The New Black Panther Party" and they paraded around in front of a Philadelphia polling place in 2008. The intimidated absolutely no one. But Republicans took video of them being stupid, goofy clowns, and decided that it was a scandal that no one threw these men in jail, forever, for the crime of voter intimidation, despite the fact that not a single voter has ever said they were intimidated by these people.

The Bush Justice Department decided not to pursue criminal charges against the NBPP. The Obama administration received an injunction against the guy with the baton and then dropped the civil case, because it is seriously the least consequential thing they could possibly be dealing with.

Caddell and Schoen don't repeat the right-wing charge that Obama's DOJ has a policy against prosecuting black people -- they just say the case is "potentially" "divisive."

Caddell and Schoen's big finish mentions Reverend Wright, accuses Obama of stereotyping, and then, breathtakingly, accuses Obama both of not using his "bully pulpit" to emphasize "the common interest of poor whites and blacks" and of "playing the populist card time and time again" with his attacks on Wall Street and insurance companies.

Who are Caddell and Schoen, exactly? And what kind of Democrats are they?

Doug Schoen is pollster grifter Mark Penn's former right-hand man. He wrote a book about how independent Republican Mayor Mike Bloomberg should run for president, with Republican Senator Chuck Hagel as his running mate. (His Bloomberg worship is funny, considering that he and Penn proposed doing "market research" for Phillip Morris to help them fight smoking bans in the '90s.) Schoen's 2008 insistence that Hillary could win if she'd just attack Obama a little bit harder makes his bemoaning Obama's supposedly divisive racial politics even more risible.

Pat Caddell is a much more interesting character. He's a brilliant former Democratic strategist for McGovern and Carter who angrily left the party in the late-1980s. He has more or less dedicated his career to trashing Democrats ever since. While he may still actually be a liberal, his intense hatred for the entire Democratic party tends to color his analysis and make him a willing useful idiot for far-right ideologues. (Caddell also used polling to invent the statistical ideal presidential candidate in 1983: "a moderate senator in his early 40's, bold, who breaks with party tradition and wins his generation's vote." While it didn't work with Gary Hart and Joe Biden, maybe he's just mad that he didn't get any credit when it did work.)

But being a professional Democratic Concern Troll makes strange bedfellows. Caddell was one of the minds behind the 1992 Jerry Brown campaign, and he relentlessly trashed Bill Clinton, whom he deeply loathed. Schoen, meanwhile, is only invited to speak about national politics because Hillary Clinton brought in Dick Morris -- who brought in Schoen and Mark Penn -- to advise Clinton in his second term.

They have put their probable differences aside in order to collaborate on hilarious opinion columns about how Democrats will and should win if they become Republicans. (That column, typical boilerplate "listen to the Tea Parties because they are true independents" bullshit, ends on a wonderfully schizophrenic note: "Democrats can avoid the electoral bloodbath we predicted before passage of the health-care bill, but in one way: through a bold commitment to fiscal discipline and targeted fiscal stimulus of the private sector and entrepreneurship." So... fiscal discipline and stimulus. Great advice, guys.)

For some reason, Democrats who criticize the administration using arguments not borrowed directly from right-wing blogs are published less often in the opinion sections of our major newspapers.