Ask not what zombies can do for Austen, but what she can do for the zombies 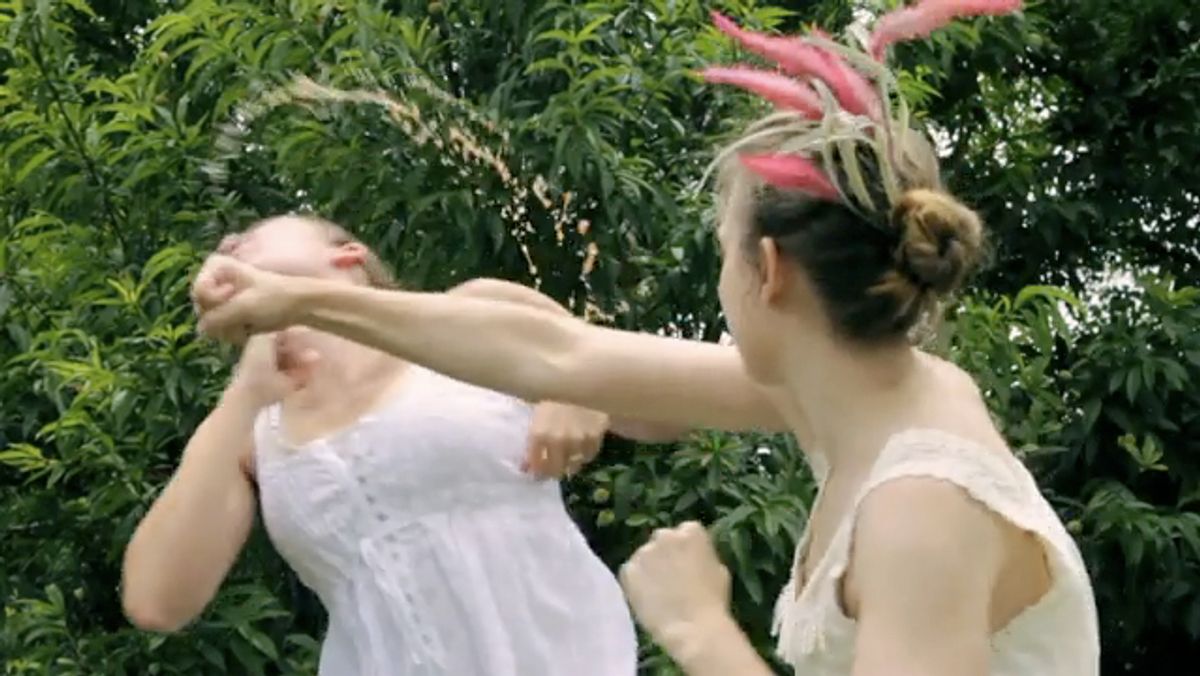 On Sunday, we learned of the latest literary mash-up, "Jane Austen's Fight Club," via Mashable. Unlike the trailers for the bestselling "Pride and Prejudice and Zombies" or the less-successful sequels "Sense and Sensibility and Sea Monsters" and "Mansfield Park and Mummies," this entry doesn't even represent a dead-tree product; there's no book, just a video in which the female characters from "Pride and Prejudice" act out scenes from the Chuck Palahniuk novel/David Fincher movie in Regency costume.

It's pretty funny, but a remark from Mashable's Brenna Ehrlich got some of us at the Salon offices thinking: "We imagine," Ehrlich wrote, "a whole lot more boys would have been OK with reading 'Pride and Prejudice' had Lizzy [sic] busted out with a roundhouse once in a while." Maybe so, but we couldn't help noticing that the vast majority of the Austen mash-ups involve injecting some action element from contemporary pop culture into Austen's stories in order to make the novels more interesting. This seems to work for quite a few readers, but those of us who find Austen's books sufficiently interesting on their own are left to wonder when the favor will be returned. We've been shown what zombies and monsters and bare-knuckle brawlers can do for Jane -- when do we get to see what Jane can do for them?

As someone who has seen nearly every horror film released in the 1980s (What can I say? It was a golden age) and a goodly chunk of the ones that followed, I regard my zombie-movie-buff credentials as secure. Still, the form has gotten a bit tired: the shuffling, semi-decomposed hordes of the undead, the moaning and pawing, the obsession with brains. A good bit of the appeal of Danny Boyle's fine "28 Days Later" was simply that the zombies in it are fast. When a variation that small can be touted as a thrilling innovation, you know a genre has gotten a bit, um, moribund.

Then take "Fight Club." It's a media property founded on the premise that men getting together to beat each other up represents meaningful resistance to a culture whose entertainments consist largely of depictions of men beating each other up. As social commentary goes, that's pretty rudimentary, but compared to the mind-set behind the average action movie, it's Thorstein Veblen. Surely action movies, as well as horror films, could benefit from an injection of Austenian wit, social satire, moral insight and depth of characterization? Because, let's face it: Too much of popular entertainment relies on fight scenes to gin up "excitement," and the dirty little secret is that, for a lot of us, the never-ending parade of fisticuffs, martial arts and car chases gets pretty dull.

Granted, we have a Jane Austen problem. Austen, like Jesus, is most misunderstood and misrepresented by those who claim to love her best. Somehow, a writer regarded by previous generations as among the greatest novelists of all time, widely read by both men and women, has lately been cast in the role of the grandmother of chick lit. Nostalgic fetishists of tea sets, balls, empire-waist gowns and Colin Firth choose to see the milieu of Austen's novels as a theme park for genteel romance instead of as the unforgiving shark pond it actually was. Pop culture can only take advantage of what Austen has to offer when it realizes what's actually there.

Still, we found it hard to imagine a better Austen mash-up -- one in which an Austen character steps into an action movie scenario, for example, to liven things up. The best prototype I could come up with was sadly dated: Stella Gibbons' brilliant comic novel of 1932, "Cold Comfort Farm." Made into a film starring Kate Beckinsale in 1995, this is that rare thing, a satire so good it has survived the thing it satirizes. Gibbons mocked the brooding, rural gothic novels of her time by casting brisk, sensible Flora Poste (who maintains that she shares with her idol, Austen, an inability to "endure messes") among the gloomy, mad and oversexed Starkadders of Cold Comfort Farm. She soon whips them all into shape.

There have been some nascent efforts on YouTube. One spoof splices the soundtrack of a trailer for "Pride and Prejudice" onto the trailer for "Star Wars Episode II: Attack of the Clones." Unfortunately, it uses the awful, pandering 2005 version of "Pride and Prejudice" starring (shudder) Keira Knightley as Elizabeth Bennet. Also, "Clones" is so boring you could graft a recording of the Wichita city council meeting onto it and make it better.

So we throw a challenge out there, to Salon readers and Internet visionaries beyond: What would Emma Woodhouse have to say to John McClane ("Die Hard") and what could Lizzie Bennet teach Jack Ryan ("Patriot Games")? Blog your suggestions on Open Salon, just make sure to tag your posts "Austen mash-up."

"Pride and Prejudice and Zombies" trailer