A case the Obama administration deserves to lose 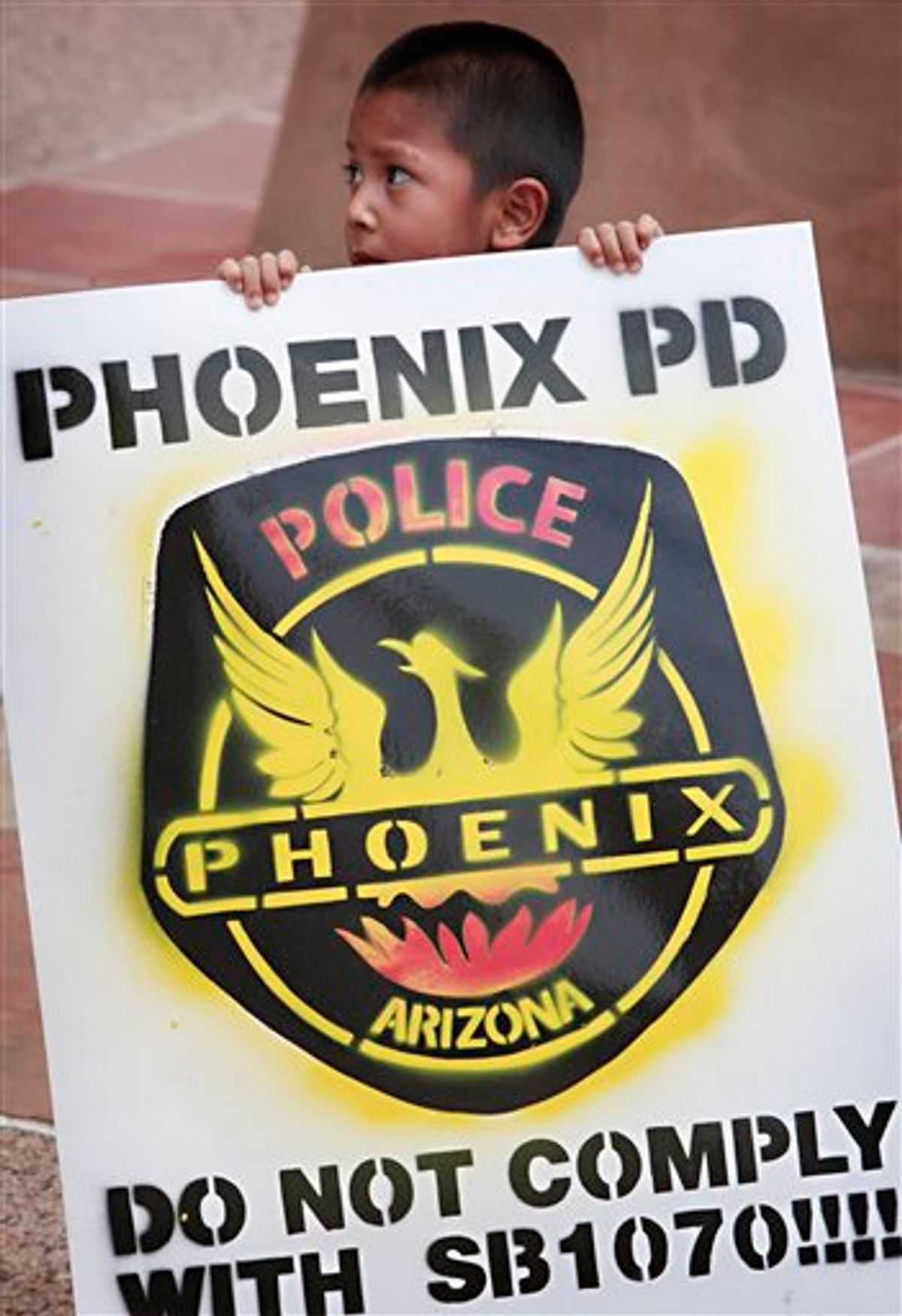 If you’re part of the Obama administration -- particularly a member of the Department of Justice -- today is a day you might want to spend in bed.

Judge Susan Bolton, a federal trial court judge stationed in Arizona, will likely decide today whether to enjoin enforcement of Arizona's immigration law, SB 1070, before it goes into effect tomorrow. If last week’s hearings on the law are any indication, her decision will find most of SB 1070 unobjectionable and fundamentally reject the central argument raised against the law by the Department of Justice.

To recap: SB 1070, an unwieldy omnibus anti-immigration bill, contains six sections, including one particularly notorious provision: Section 2, which requires police officers to check the immigration status of anyone who (1) they reasonably suspect is in the country illegally or (2) is arrested for any crime. Other parts of the law -- sections outlawing, for example, the smuggling, soliciting, or harboring of illegal aliens -- have attracted less notice, and less opposition.

In challenging the law, civil rights groups targeted Section 2, arguing that the provision encouraged the widespread detention of lawful residents based on vague suspicions of illegal status. The Obama administration, meanwhile, advanced a sweeping challenge to the law, avoiding any race-based arguments and asserting instead that all six sections were trumped, or "preempted," by federal law. (Attorney General Eric Holder reserved the right to mount a civil rights challenge to SB 1070 if evidence emerged that the law was discriminatorily applied.)

Based on her questions last week, Judge Bolton seems inclined to hold that, apart from several relatively uncontroversial provisions, SB 1070 does not impinge on the prerogatives of the federal government. (At one point during the argument, she asked pointedly of a DOJ attorney, "How is there a preemption issue?") The general thrust of her queries was that illegal immigration is in part a "public safety" issue and that SB 1070 is largely a legitimate attempt to address a "dangerous situation[]."

The challenges filed by civil rights groups, on the other hand, are likely to meet with greater success. Bolton seemed persuaded by arguments that Section 2 impermissibly authorizes police officers to detain people, even where there is no reason to believe that they are in the country illegally. She also might enjoin Section 2 based on the comically vague and seemingly random list of factors that, according to Arizona’s police training board, give rise to "reasonable suspicion" of illegal status (for example, "dress," "demeanor," and "traveling in tandem").

If Judge Bolton rules as predicted, the Obama administration will emerge from the legal battle over SB 1070 badly bruised. It will have gone toe-to-toe with Arizona Governor Jan Brewer and lost quickly and decisively, at the hands of judge appointed to the federal bench by Bill Clinton. Absurdly or not, conservatives are likely to paint the whole episode as the Democrats’ version of the Terri Schiavo debacle -- an arrogant federal overreach into an area of predominantly local concern. Holder’s admission that he hadn’t read the law before opining on it will be the new armchair, video-based diagnosis of cognitive function.

It would be one thing if a loss were unexpected. But that’s hardly the case. As this space has noted, the preemption argument was always legally tenuous. Illegal immigration has unquestionably adverse consequences for local governments, and no moderate judge was or is likely to hold that any state effort to address the problem, however reasonable, is an intrusion on federal authority. (Some journalists and scholars have disagreed.) And as also noted, the preemption argument rests uncomfortably with the Obama administration’s failure forcefully to advocate for any version of comprehensive immigration reform. It’s hard for a court to credit the argument that the field of immigration is reserved for federal action when the federal government so manifestly lacks a coherent immigration policy.

It is, of course, entirely too early to draft a definitive epitaph for the administration’s offensive against SB 1070. Judge Bolton’s courtroom is only the first stop on a litigation train that may reach its terminus at the Supreme Court. Things are not likely to get better for the administration any time soon, though, given the parties’ next stop: the Ninth Circuit. A favorable ruling there will be written off by SB 1070 supporters as a predictable, liberal result from an activist court, while a loss would aggravate the injury inflicted by Judge Bolton’s ruling.

The Obama administration’s blemish (and Jan Brewer’s consequent glow) tells only part of the story, of course. The fight over SB 1070 is partially a political battle, but it’s also one about principle, as the intervention of the ACLU and other advocacy groups illustrates. Judge Bolton might not give civil libertarians everything they want, but a decision paring even in part SB 1070’s most offensive provision will vindicate the animating philosophy of their suit: that threats to a state’s social order, no matter how grave, must be addressed within constitutional limits. The Obama administration might have preferred that this lesson were conveyed in a slightly friendlier text, but it can’t very well quibble with the message.