The "peak performance coach's" new show is a miserable failure. Can he follow his own advice? 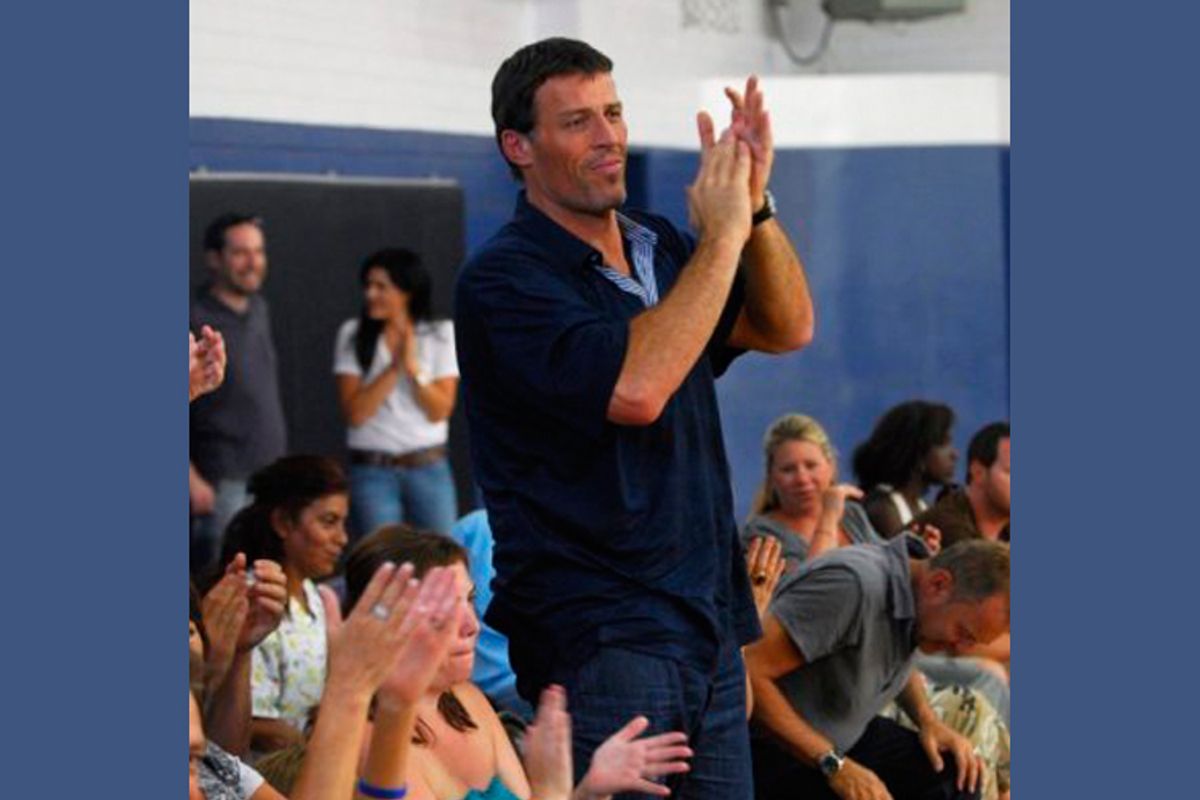 "Whatever you think your biggest problem is, I personally guarantee, most of the planet would love to have your horrific problem." Motivational guru Tony Robbins is reminding me and 452 other video chat participants that we Americans are soft and spoiled and have a bad habit of overreacting to our tiny little troubles with stress and depression and panic attacks. I can only assume that the sorts of lethargic, self-hating ovens (myself included) who tune in for an interactive kick-in-the-ass from Robbins via the Huffington Post might agree.

But Robbins is the first to say that he understands completely. You see, years ago, Robbins was living in a 400-square-foot bachelor apartment in Venice, Calif. He was broke and he was exactly 38 pounds overweight and he was sitting around watching Luke and Laura on "General Hospital" when – Knock! Knock! – someone knocked on the door of his apartment. When he opened the door, there stood an old friend he hadn't seen in years. Robbins was so humiliated that this person saw what a worthless, dumpy human parasite he had become (albeit one who, despite his depressed state, likely knew his exact fat-to-muscle ratio) that he immediately went on a long run on the beach. "I was making this radical change in my physical biochemistry," Robbins half-shouts at us, making his impromptu jog sound roughly akin to teleporting or spontaneous combustion or time travel.

But that's the glory of Tony Robbins, isn't it? Despite his rather simple point -- working out really helps soap-opera-watching shut-ins to feel less depressed -- his story soon takes the shape of a personal epiphany. But then, this is a man who's transformed common-sense wisdom into a multitiered global brand, a man who has the cojones to call himself a "human potential consultant" and a "peak performance coach," a man who's magically transformed his lazy-fat-guy jog on the beach and every other humdrum experience he's ever had into a series of dramatic, life-changing narratives with which he can inspire an entire nation to "play the game of life higher than you are [now]."

"We have a need to feel important," Robbins explains to one video chat participant a few minutes later in his earnest, scratchy voice, his tone hinting that, even after two decades of this, he's still pumped up by his own simple wisdom nuggets. And even though he's talking fast, dropping a flurry of oft-repeated gems like "We've entered winter (the recession), and winter will get rid of some of the old values" and "Everybody has something that will make them finally make change a must and not a should" and "Go read the stories of human beings who have been through hell and back and have taken their lives to a new level," I'm starting to feel more inspired and energized in spite of myself. What the hell is wrong with me? I need to leave this pap behind and get back to work!

"There are six needs," Tony says as if he's speaking right to me. That's it, I can't escape. I'm in awe of this man. Exactly six needs! Think of what you or I could do, if we had half of Robbins' courage of conviction!

We can only assume that Need No. 4 is "Star on your own self-help reality show on NBC," but now that feel-good program "Breakthrough With Tony Robbins" (8 p.m. Tuesdays) has been pronounced dead on arrival thanks to horrific ratings (it was the lowest-rated network show in its time slot on Tuesday), Robbins may need to retreat to his Fiji mansion for a few weeks, hoping for his own breakthrough.

So what went wrong? How was the Midas of the self-improvement world unable to turn his big prime-time debut into gold? Most likely, audiences are fatigued by a steady flow of this kind of "help the nice family recover from tragedy" programming. After all, could you possibly find a more depressing story for the first episode? Frank and Kristen Alioto were having a great time at their fabulous destination wedding in Mexico. Then, at the reception, Frank jumped into the pool and broke his neck, instantly turning him into a quadriplegic. Now, instead of enjoying their life as newlyweds and starting a family together, Kristen is Frank's caretaker, and they're both totally devastated by their new reality. Does anyone really want to see Tony Robbins telling this doomed pair that they just need to "get a new insight" so they can "play the game of life higher than [they] are [now]"?

Incredibly, though, Robbins' interactions with this couple are the highlight of the "Breakthrough" premiere. Whatever you want to say about Robbins, he demonstrates a lot of warmth and intuitive wisdom in his talks with these two quite obviously very depressed, traumatized human beings. In one particularly mesmerizing moment, he gets Kristen to go to the lowest point of her average day with Frank. She says that she sometimes moves him to the bed and forgets to take his glasses off, and then his glasses hurt him, and she feels furious at herself. Robbins has her say exactly what she would say in that moment -- and you know that she's really doing it, because the word "fuck" is bleeped over a few times.

Then Robbins turns to Frank, who says that he feels terrible and helpless whenever Kristen gets frustrated like that. "Here's what you need to do," Robbins says. "Whenever she's in that place, instead of feeling sad and weak, you feel strong, and all she needs is your presence. The way you feel strong is in noticing all the things you haven't been noticing before. Look at her. Look how horrible she feels."

Frank looks at Kirsten. She looks at him. It's hard to say exactly how this shows, but all of a sudden, Frank looks stronger and calmer and Kristen is leaning on him. And … well, it's a goddamn breakthrough, is what it is!

"In this moment, he could take her from tears to feeling connected. And that's what she's starving for," Robbins explains. "And now he's starting to know, 'Hey, I'm not helpless.' Suddenly he starts feeling like, 'Wow, I can really be her man. I can show her that I can make a difference.' That's the beginning of changing their relationship."

"Being able to provide Kristen with an emotional shoulder to lean on?" Frank says to the camera. "That was very powerful. It was important for me to understand that I can still be there for her, and provide her with strength."

Crazy as it sounds, everything else in the episode becomes possible because of this moment: Frank and Kristen go skydiving, Kristen goes to a spa, Frank plays Murderball; the rest of it is, quite honestly, just bland, rewarmed "Extreme Makeover" fare, with Robbins standing by, grinning from ear to ear, but never involved in quite the same intimate way that he was in that first crucial conversation.

Except I bet Robbins was interacting with them a lot, and that they discussed over and over the transformation taking place, but the show's editors and the network executives still felt compelled to shove it all into the same shape as half a dozen other shows already on the air. And that's too bad, because even though Tony Robbins is a cheesy, fist-pumping, fire-walking, tough-loving, self-parodying, product-pushing, self-branding kind of a guy, he's also incredibly good at narrating the process of recovery from life's disappointments and setbacks. The man is a good talker -- Christ almighty, is he ever. But he also has an instinctive knack for locating the center of a person's problem and working out from there. Robbins' energy is boundless, and that boundless energy is obviously contagious to everyone around him.

I tuned in to his video chat mostly as a curiosity, and I ended up listening to the whole thing. I couldn't close my stupid browser. Sure, I could intellectually recognize that the wisdom nuggets he was dropping were pretty run-of-the-mill, but I still found myself taking them to heart. Yes, Robbins is sort of a freak -- clenched jaw, wild eyes, rambling asides -- but he also comes across as a compassionate person.

So instead of cackling over the apparent failure of Robbins' brand-new show, I almost wish that Robbins could host more of a live talk show for damaged, discouraged or just deeply lethargic, unambitious people (like me). I wish that, instead of plugging his products on infomercials and hosting expensive weekend seminars on peak performance, Robbins could just sit in a chair and invite guests to tell their stories, then he'd help them shake up their downward spiraling lives.

The problem is, Tony Robbins has sold himself so well, and he's so recognizable as a franchise, that it's tough for most people to encounter him as an earnest healer. Forget that none of our Earnest Healers from Oprah to Dr. Phil goes into the field without a multitiered international marketing strategy already in place. The gurus of the world have been thoroughly commodified, whether or not the Dalai Lama has his own Twitter feed yet. (Um, by the way? He does.)

As for Robbins, this disappointment may bring him down for a while, but I personally guarantee him that most of the planet would love to have his horrific problem -- and his mansion in Fiji to go with it. This may be his personal winter, and winter will get rid of some of the old values (his ego-driven compulsion to create a cult of personality, just for example). But everybody has something that will make them finally make change a must and not a should, Tony. Go read the stories of other human beings who have had their TV shows canceled and then taken their lives to a new level in the wake of that.

And Tony? Good luck. Not that you need it.