What the ruling against Arizona's immigration law means 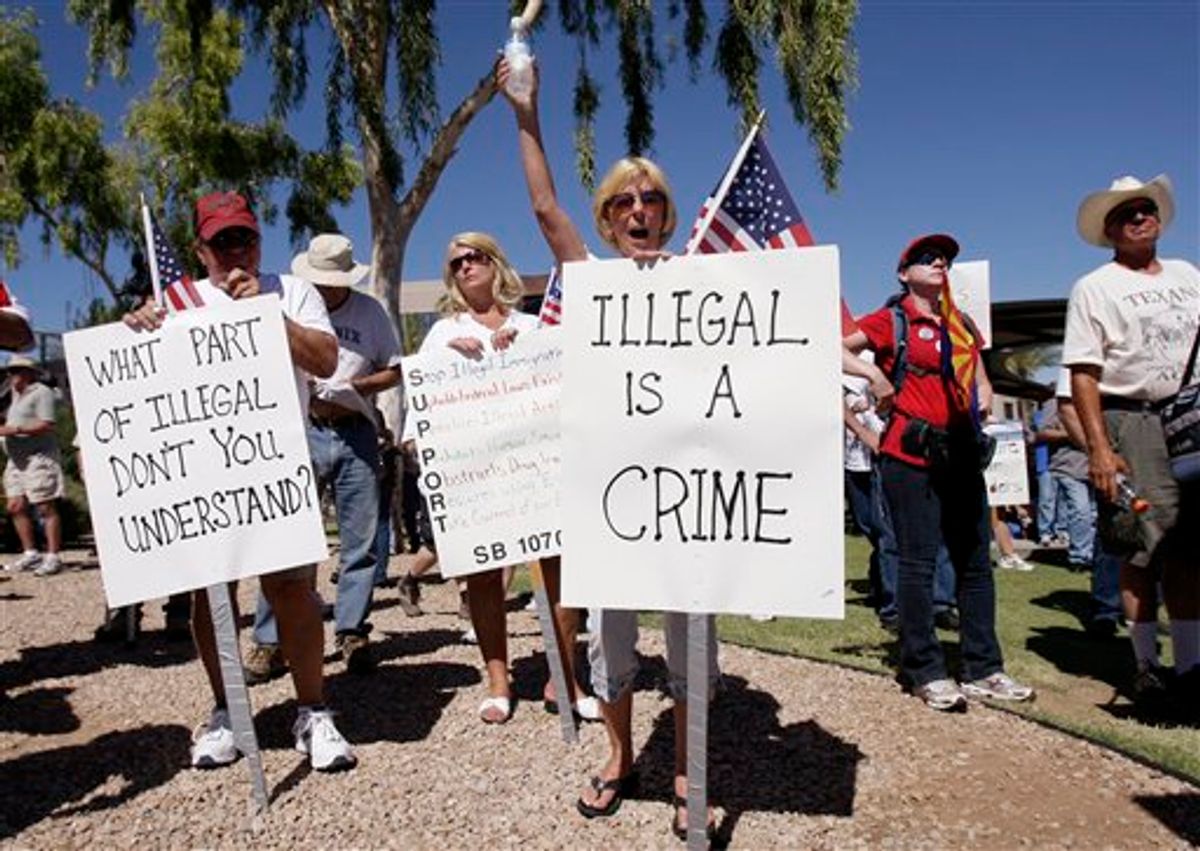 FILE - In this June 5, 2010 file photo, Judy Schulz, center, cheers as her husband Richard Schulz, left, both of Glendale, Ariz., joined hundreds supporting Arizona's new law on illegal immigration as they listen to speakers near the capitol in Phoenix. At the heart of the debate over Arizona's tough new immigration law is frustration with how the U.S. deals with the estimated 11 million illegal immigrants within its borders. The federal government says its policy is to focus on dangerous, criminal immigrants, not the average worker who is just trying to earn a living and keeps his nose clean. There is just no way the government can find, arrest and deport so many people, they argue. (AP Photo/Ross D. Franklin, File) (AP)
--

Yesterday, a federal judge put a hold on parts of the Arizona Immigration law, known as SB 1070/HB 2162, that was scheduled to take effect today. Four sections of the 14-section law were ruled to have parts that were pre-empted (overlapped!) by existing federal law and have been enjoined (stopped!) pending further prosecution of the government's case against Arizona and its law.

U.S. District Judge Susan Bolton ruled that the United States was likely to succeed in its challenges to four specific sections of the law: Sections 2, 3, 5, and 6. The offensive parts were summarized this way in the Court ruling:

Portion of Section 2 of S.B. 1070 / A.R.S. § 11-1051(B): Requiring that an officer make a reasonable attempt to determine the immigration status of a person stopped, detained or arrested if there is a reasonable suspicion that the person is unlawfully present in the United States, and requiring verification of the immigration status of any person arrested prior to releasing that person

Section 6 of S.B. 1070 / A.R.S. § 13-3883(A)(5): authorizing the warrantless arrest of a person where there is probable cause to believe the person has committed a public offense that makes the person removable from the United States

Judge Bolton issued injunctions against these four parts (but not against 10 others that the U.S. government had requested) for a variety of reasons that mostly boil down to this: Arizona can't make laws that preempt federal laws, and Congress has quite clearly staked out most areas of immigration law as the sole territory of the federal government.

In Section 2(B) and Section 3, the government had two reasons for requesting enjoinment. One relates to the above-mentioned federal right to manage and enforce immigration policy. They also argued, and the judge agreed, that Arizona's requirements for seeking immigration verification from the federal government would impose a significant burden upon the Immigration and Customs Enforcement bureau.

Don't think so? Consider this: In 2009, Tucson "used the cite-and-release procedure" authorized under Arizona law to briefly arrest 36,821 people. Imagine now if a fraction of those folks had to be detained for much, much longer while they waited for the federal government to verify their immigration status. This would increase "the intrusion of police presence into the lives of legally-present aliens (and even United States citizens), who will necessarily be swept up in this requirement," according to the ruling.

The government also argued, in objecting to Section 3, that many legally-present immigrants won't have ready proof of their right to be here, including those traveling to Arizona from the 36 countries currently part of the Visa Waiver Program (hello, Spanish tourists). The government also noted that U.S. citizens are not required by federal law to carry identification at all times, therefore creating two conflicts: 1) there's a good likelihood citizens would be taken into custody if unable to quickly prove their citizenship and 2) the government has consciously made the decision not to require identification, which can't be countermanded by Arizona's decision. Arizona would also be stepping on foreign policy and immigration toes by placing new restrictions on travelers.

Section 5 doesn't fly because Congress, in passing previous immigration laws, considered but left out specific provisions punishing employees, choosing instead to focus sanctions on employers who hired undocumented immigrants. Federal law already exists making it a crime to knowingly lie about immigration status in order to obtain a job. Thus, Arizona's attempt to make it illegal for undocumented immigrants to search for or take work is a double conflict with U.S. law: In addition to being targeted in such a way that it nearly ensures anyone who looks Hispanic will be subject to police curiosity if they gather in a place -- say, at a Home Depot near the contractors' entrance -- to see if anyone needs workers, it is also pre-empted by federal legislation that already prohibits such potential employees from deceiving employers about their immigration status.

Section 6 was written expressly to give police officers the ability to arrest without a warrant anyone whom they suspected might be an undocumented immigrant if they had broken an Arizona law in another state. If that sounds confusing and convoluted, you're not the only one who thinks so. Judge Bolton seems to have struck down this provision in part because she's not sure what it means:

Because A.R.S. § 13-3883 already provides for the warrantless arrest of a person who commits a felony, misdemeanor, petty offense, or one of certain criminal violations in connection with a traffic accident, the effect of Section 6 on warrantless arrest authority is not entirely clear. Indeed, the Arizona officer training materials state that the revision to A.R.S. § 13-3883 “does not appear to change Arizona law.” Implementation of the 2010 Ariz. Immigration Laws - Statutory Provisions for Peace Officers 11 (June 2010), http://agency.azpost.gov/supporting_docs/ArizonaImmigrationStatutesOutline.pdf. Both the United States, in its Motion, and Arizona, at the Hearing, suggested that the revision provides for the warrantless arrest of a person where there is probable cause to believe the person committed a crime in another state that would be considered a crime if it had been committed in Arizona and that would subject the person to removal from the United States. (Pl’s Mot. at 32-33; Hr’g Tr. 46-48.) What is clear is that the statutory revision targets only aliens -- legal and illegal -- because only aliens are removable. See Hughes v. Ashcroft, 255 F.3d 752, 756 (9th Cir. 2001) (citing 8 U.S.C. § 1227).

Emphasis mine. Basically, this section may have been created to give police officers in Arizona the power to decide, on the spot, whether a criminal offense was punishable by deportation. Since that's a decision that's always left to a federal judge, the section was ruled likely to be stricken when the case advances.

The real meaning of this ruling is complex, but also very simple: Parts of this law are predictable overreaches. Parts of this law, though, are unlikely to be struck down, because some gray areas exist in terms of what states can enforce regarding the presence of undocumented immigrants within their borders. Some of the challenges that the government lays out here could be defeated by a law with craftier wording, because the burden is on the government to prove that the law could on its face result in harm or preemption of federal law.

This means that some people in Arizona can breathe a small sigh of relief today, knowing that tomorrow, they'll be a little less likely to face unjust arrest or detention. This could still be reversed; the injunction is a temporary stay. Governor Jan Brewer has already vowed to take the case to the Supreme Court if she has to -- and let's hope it doesn't come to that, though I expect it will. The current Court might not be as forward-thinking as the Court in 1941 that decided the Hines case upon which much of Bolton's ruling rests.

For now, this granting of partial enjoinment means the tricky fight for immigration reform has a long, mine-covered march ahead of it. Yesterday, though, was a good day -- a respite in the battle for a sane immigration policy.