The frenzy over the former first daughter's nuptials shows the silly, retro premium we put on women's wedding days 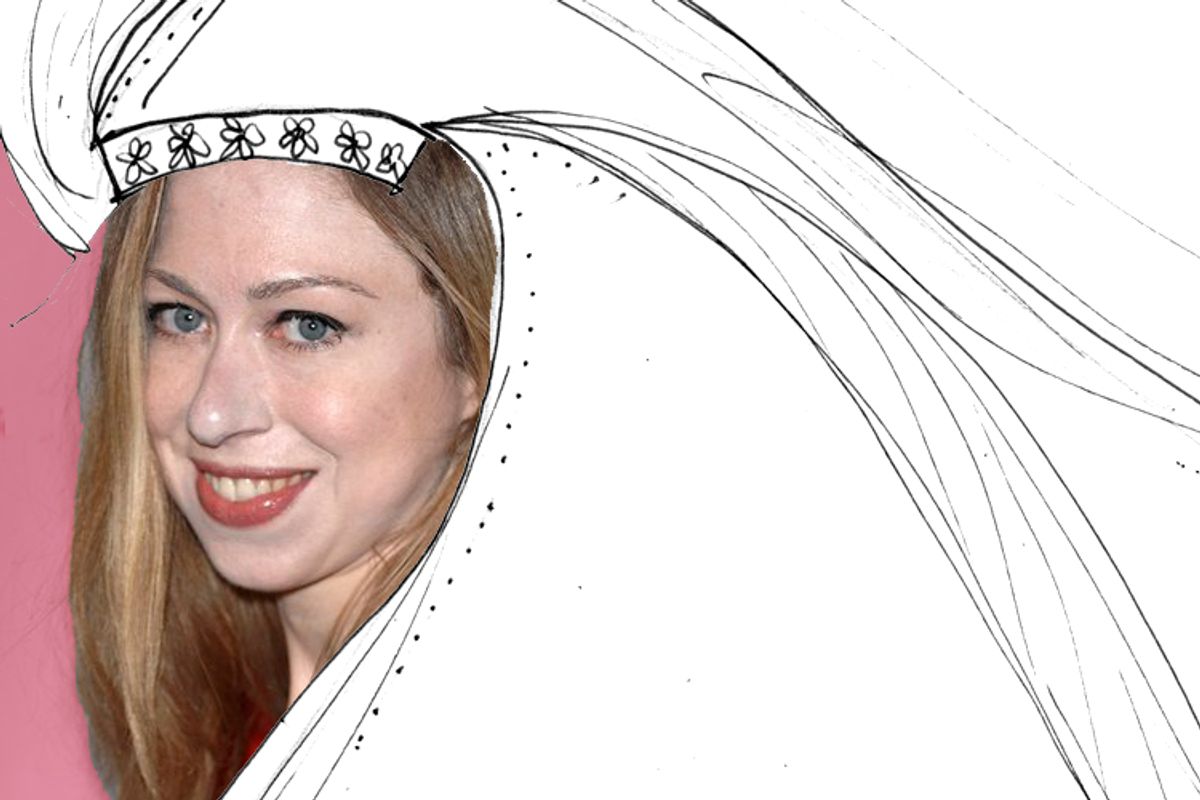 What's that, you hadn't heard about the event that the former first daughter and her family have gone to great lengths to keep private, that her mother has emphatically stated is supposed to be "a family wedding"? You missed the three pieces in the New York Times, the AP story, the Washington Post's On Faith blog featuring Deepak Chopra? The multiple New York magazine, People and ABC updates on leaked guest lists, costs, security, tents and how much weight Bill Clinton has lost? What about TMZ's reported playlist of songs for Chelsea's band, or the Daily Beast's slide shows of her exes and of other presidential family weddings! What a shame to miss that last one, with it's bone-rattling American Gladiator setup about how "the countdown is on" to find out whether Chelsea's "rumored Rhinebeck blowout [will] best JFK Jr's secluded glamour." No doubt it's exactly what young Clinton was thinking, when she first sat down with boyfriend Marc Mezvinsky, their parents and an event planner to discuss their marriage: "OK, guys, do whatever you have to do, I just want to beat John-John!"

People: Take a pill. The woman is getting married. To a man she's known for more than half her life and with whom she has been romantically linked for years. There is no shocking twist, no showdown between her and all the other brides who ever shopped at Kleinfeld's, or her and all the other kids who ever were told to stop roughhousing in the Lincoln Bedroom. There is no secret dance-master who's mixed Chelsea the most ass-shaking playlist on the planet. It's a wedding. It happens all the time.

I am mostly on board with the Washington Post's fashion critic Robin Givhan, who recently pointed out that Chelsea Clinton is famous "by birth, not by action," has spent her life trying to dodge a spotlight, has never exploited either her own family or the vogue for confession by spilling her guts to Oprah, and has "never -- ever, ever, ever -- given any indication that she is especially adept at fashion." Givhan wondered why, given this history of restraint, Chelsea's decision to wed has made the media so unattractively eager to poke and prod and kvell and bitch and ultimately expose every dress detail and designer flourish? "The prying reportage is beginning to smell of dumpster diving," Givhan wrote, noting, "This is how our culture rewards decorum."

Far more troubling, I would argue, is that the ceaseless obsession with and exultation over Chelsea's upcoming nuptials is emblematic of how our culture rewards women who marry, decorously or not. The hyperventilation over a woman's nuptial day -- a frenzy so outsize that the media applies investigative efforts that might be better suited to, say, the BP disaster -- leaves me even more troubled than the (admittedly sad) violation of Chelsea's privacy.

After all, she and her groom could easily have had a judge (or, I suspect, the religious officiant, ship's captain or president of their choice) marry them in a backyard last Thursday if they'd really wanted privacy. They obviously wanted something a little more elaborate, a little more festive, perhaps to the tune of $3 million to $5 million. And fine. Her dad was president, her mom is secretary of state, they can afford it and she's their only daughter. But it surely comes as no surprise to anyone in the Clinton family that America boasts a prurient press corps.

Nor should it come as a surprise that people are invested in Chelsea. In her piece, Givhan referred to the iconic photo of the 18-year-old gripping both her parents' hands in the midst of the Lewinsky disaster, positing that America appreciated her youthful ability to keep her parents together, sparing the nation a tawdry divorce. I think more of  photos of Chelsea as an  exuberant teen trailing her dad across a golf course doing ballet pirouettes, or waving madly next to her mother from atop an elephant in Nepal. Chelsea was a little kid when she entered the White House, a little kid pushed into a very big and often nasty world.

Back when she was a brainy 12-year-old, hitting puberty hard with a mouthful of metal and a head full of frizz, the same media currently snurfling through the trash cans outside her bachelorette party was whooping it up over her adolescent shortcomings. I have often wondered what it must have felt like, at that delicate and easily damaged age, to be made fun of not simply on a playground or at your locker, but on national television, on "Saturday Night Live." What must it have felt like 16 years later to be reminded of that mockery, with John McCain's knee-slapping campaign joke involving Chelsea, her mother and Janet Reno? And let's not forget that somewhere in between, there were years in which her father's extramarital dalliance with a woman not much older than she was recounted in fervid detail, not just in tabloids, but in the country's leading newspapers and television stations and in a special prosecutor's report to the United States Congress.

That Chelsea has grown up gorgeous seems to have relieved a lot of people (though it's difficult not to wonder: What if she hadn't?). That she evidently has grown up stable has satisfied others. And I'm willing to believe that those who are now getting all het up about her wedding want the best for her. What bothers me is the barely veiled attitude that it is the fact of her upcoming wedding -- and that alone -- that somehow demonstrates to them that Chelsea is pretty and that everything has turned out all right for her.

I don't mean to be the Matrimony Grinch. Weddings are joyful and great. What they are not is the apotheosis of the human, the romantic or, more pointedly, the female experience.

Chelsea Clinton is an interesting lady. Yes, she does appear from a distance to have survived her parents' fame and public troubles without spiraling into drug addiction or meltdown, which in my book means that she is tough. She went to Stanford, got an M.Phil to Oxford, worked for McKinsey, took a dismaying hedge fund job and then went on to study public health and management at Columbia University. According to John Heilemann and Mark Halperin, it was Chelsea's conviction that her mother should not break her pledge to serve out her first term as a New York senator that ultimately convinced Hillary not to run for president in 2004. I'm not suggesting that we should be thanking Chelsea for a Barack Obama administration or blaming her for four additional years of George W. Bush, but can't we agree that there are more fascinating things about this woman than the fact that her guests will be boogeying to "Billie Jean"?

Chelsea spent a lot of 2008 traveling the country as one of the most articulate and effective surrogates for her mother's history-making presidential campaign. The New York Times reported on her ability, at an appearance with college students in Wisconsin, to engage in discourse on "Medicare Part D, the distinction between the chronically and occasionally uninsured, health care premium caps, Pell grant allowance maximums, income contingency repayment programs for financial aid, sugar-based ethanol and carbon sequestration ... Romanian reproductive policy and the design of the internal combustion engine."

But did you hear she's getting married?

Some months ago, Bill Clinton was asked by another recently wed presidential daughter, Jenna Bush Hager, how he'd feel watching his daughter walk down the aisle. His response initially reminded me of how he'd talked about Chelsea in the summer of 2007, when I'd covered his foundation's annual summer trip to Africa, and he'd not missed a single conversational opportunity to "brag on" his daughter: how funny she was, how mature she was, how smart she was; the great ideas she had about education and public health, her devotion to her mama. To Bush Hager, Clinton said that he'd be "proud, grateful, [and] wistful" as he watched her get married, that he'd think of the day she was born, her first day of school.

But then he started in on how he hoped he'd make it down the aisle in one piece to "do the hand-off," and on how he agreed with something that Jenna's father had told him about watching his daughter marry: "You know it proves you've done what you were supposed to do, but it doesn't make it entirely easy."

What about "handing off" your daughter to another man proves that you've done your work as a father? How does it demonstrate that you've done what you're supposed to do more vividly than watching your daughter graduate from college, make friends, live independently, land big jobs, develop and follow through on ambitions, help her mother run for president? When Bill later told People magazine that Chelsea's wedding would be "the biggest day in her life, probably," I'm sure he meant well, but I kind of wanted to throttle him. What about the days on which she might pick up her master's degree, run a company, have a child, win the presidency? What about the day, already past, on which she fell in love with her betrothed, surely as life-changing as the one on which they will make it legal?

There are a lot of people who don't get married. There are a lot of people who can't get married. If Chelsea Clinton, by chance or design, had fallen into one of these two categories, would it mean that her parents had not done what they were supposed to do, that they would feel less pride in her, that her life would lack its most important moment? I wonder if those focusing so hard on her wedding would think it meant she was any less well-adjusted, or any less beautiful.

The fevered fetishization of the marital day is not just irritating, it's destructive. It reproduces attitudes about personal -- and especially female -- achievement that are far past their sell date: that marrying is the goal toward which all of us strive, that our weddings are somehow the most exalted expressions of our accomplishments and of ourselves. That they are proof, validation, some sure sign that we turned out OK.

You know what weddings are? They are parties. They're often happy, often tacky celebrations of love and family and commitment. Sure, some are elaborate spectacles and networking events; some are stirringly simple; some are movingly grand. Who knows how tasteful or how extravagant the marriage of the only Clinton daughter will turn out to be? Who -- besides those who really love her and her future husband -- really cares?