A tough sell: The female condom

D.C. launches a campaign to spread the word about the FC2. Does it have a chance? 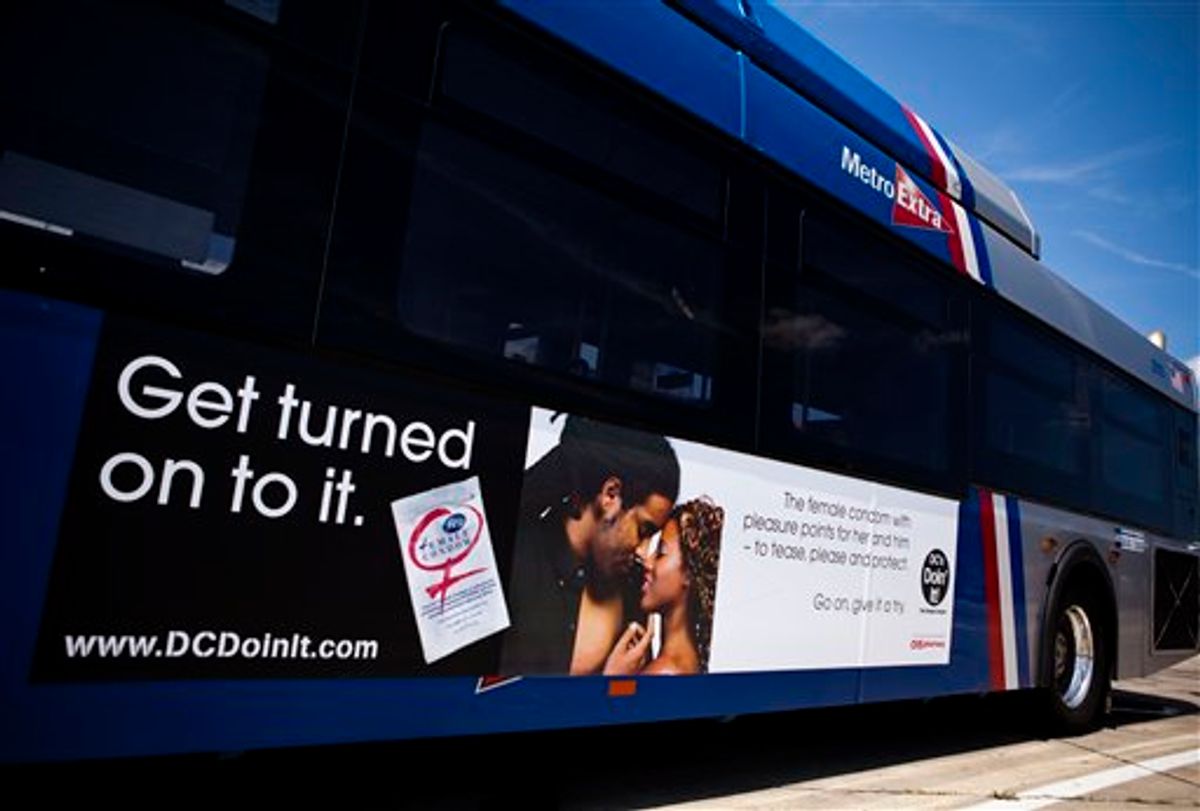 A Washington, D.C. Metro bus displays an advertisement for a female condom, in Washington, Monday, July 26, 2010. To encourage their use, community groups are handing out 500,000 of the female condoms, flexible pouches that are wider than a male condom but similar in length, during instruction sessions at beauty salons, barber shops, churches and restaurants. (AP Photo/Drew Angerer) (AP)
--

Washington, D.C. is telling women to "get turned onto it," already. "It" being the female condom. A campaign kicks off Thursday with the premiere of a website and 460 randy bus ads that advertise the new female condom's "pleasure points," which are meant to "tease, please and protect." The promotional push joins a campaign underway since March to handout 500,000 female condoms in the area.

The thinking behind the very enthusiastically-titled "DC Doin' It!" campaign is that it empowers women by giving them control of their own sexual health. Plus, the more tools to fight HIV, the better. It doesn't hurt that the female condom can be inserted up to eight hours before sex -- so, theoretically, there's no need to break the mood by reaching for a condom. And it covers a larger external area, so there's the possibility for greater protection from STDs. All great things!

But trying to sell women on the female condom is no small task: It has a reputation for being unwieldy and noisy during sex (imagine what the sound of a rustling plastic bag would do for the mood). With the latest version, known as the FC2, the noise issue has been addressed -- but, alas, the design is much the same. Activists say the uphill struggle is worth it to help combat the rising rate of HIV among women -- especially black women. It's the top cause of death for African-American women between the age of 24 and 39 and, in D.C., 3 percent of black women have it (compare that to the average rate of infection nationwide: 0.7 percent).

As for taking the same approach elsewhere? No dice. According to the Associated Press, Washington is the only place that offers the FC2 for sale outside of a health clinic.