If the investment bank wants to avoid further Senate hearing humiliation, it's going about it the wrong way 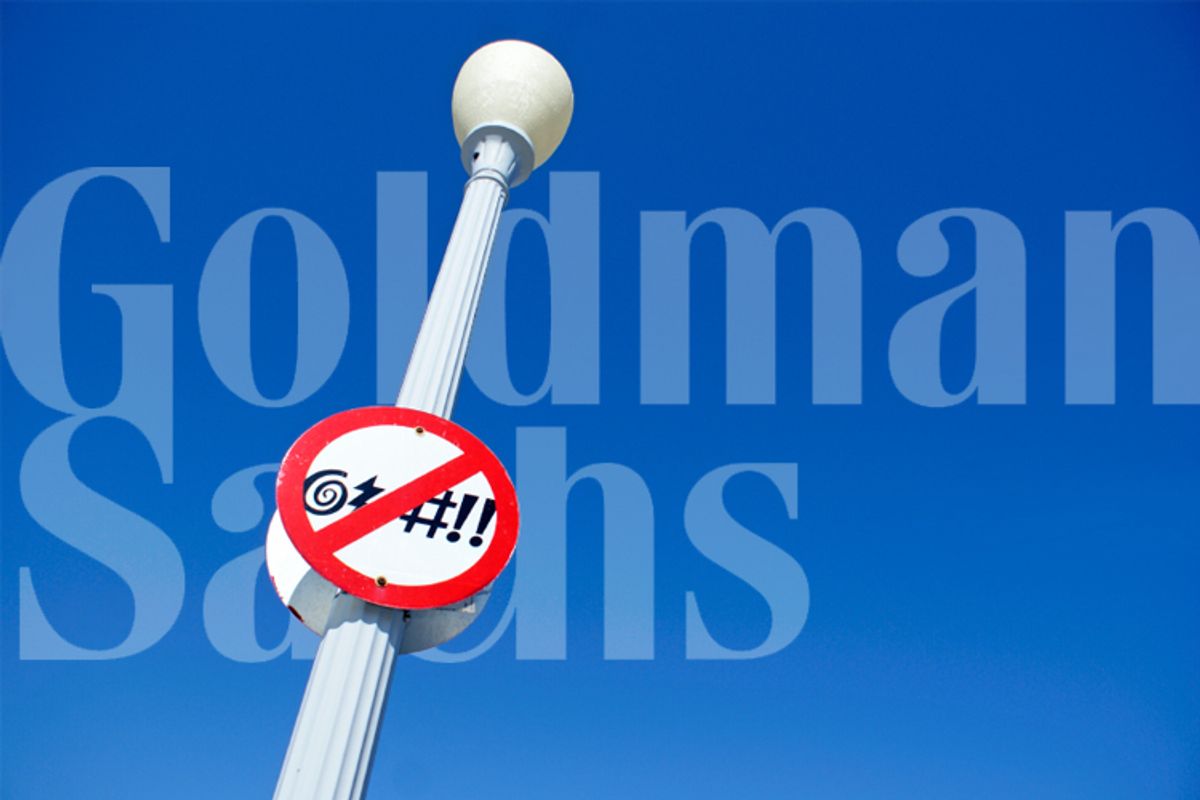 Goldman Sachs employees will no longer be allowed to swear via e-mail, texts or Twitter, reports the Wall Street Journal. If a Goldman trader wants to express his opinion on a particular subprime-mortgage-backed CDO, he will have to be polite -- "in my view, Abacus 2007-AC1 would be a poor investment for our clients" -- instead of profane: "that's one shitty deal."

The story is getting plenty of pickup, even though other Wall Street financial institutions have had similar rules in place for years. There's something funny about the castration of tough-talking traders, although some of us are laughing through our tears as we contemplate the imposition of Emily Post rules of e-mail etiquette on the one hand while we learn that Goldman is already taking steps to circumvent the new rules of bank reform on the other.

But Goldman is making a mistake. Rather than attempting to change employee behavior, it should be listening, and learning to understand what all the profanity signifies. At least -- that's the lesson I take from a fascinating little story on how Microsoft Xbox Live support staff monitor the traffic flow of profane tweets by Xbox Live users.

For the Xbox Live support crew, a cursing uptick is an early warning alarm bell, a signal that something's wrong. "'Foul-mouthed tweens,'" writes Casey Hibbard at socialmediaexaminer.com, "just might be the first tip-off of a major service outage."

"When people are passionate and they use that kind of language, a lot of times there's legitimately something wrong with our service," says McKenzie Eakin, program manager, Xbox LIVE Service Delivery (also known as @XboxSupport Elite Tweet Fleet Sky Captain).

"Our ability to identify and fix emerging issues is so much faster with our ears to the street."

(I confess -- I've always considered Microsoft to be a pretty square company. But now that I know that the firm employs "Elite Tweet Fleet Sky Captains" I may have to revise my opinion. However, I am alarmed to learn that the Xbox Live team's awesome Twitter support won them the "Guinness World Record for Most Responsive Brand on Twitter." I fear the Guinness Book of World Records is watering down its brand.)

In any case, imagine how Goldman could apply the same strategy. Any time the company's e-mail monitoring software registered a surge of profanity, supervisors could step in and address the underlying cause -- the prevalence of shitty deals! -- rather than just try to stamp out the symptoms. This could help avoid the embarrassment of humiliating Senate hearings and SEC fraud investigations. The message Goldman is sending right now is: Don't curse, but feel free to continue screwing our clients.