Obama on "The View": The end of civilization!

Critics fume, but his appearance is a weird, respectable mix of questions about race and Justin Bieber 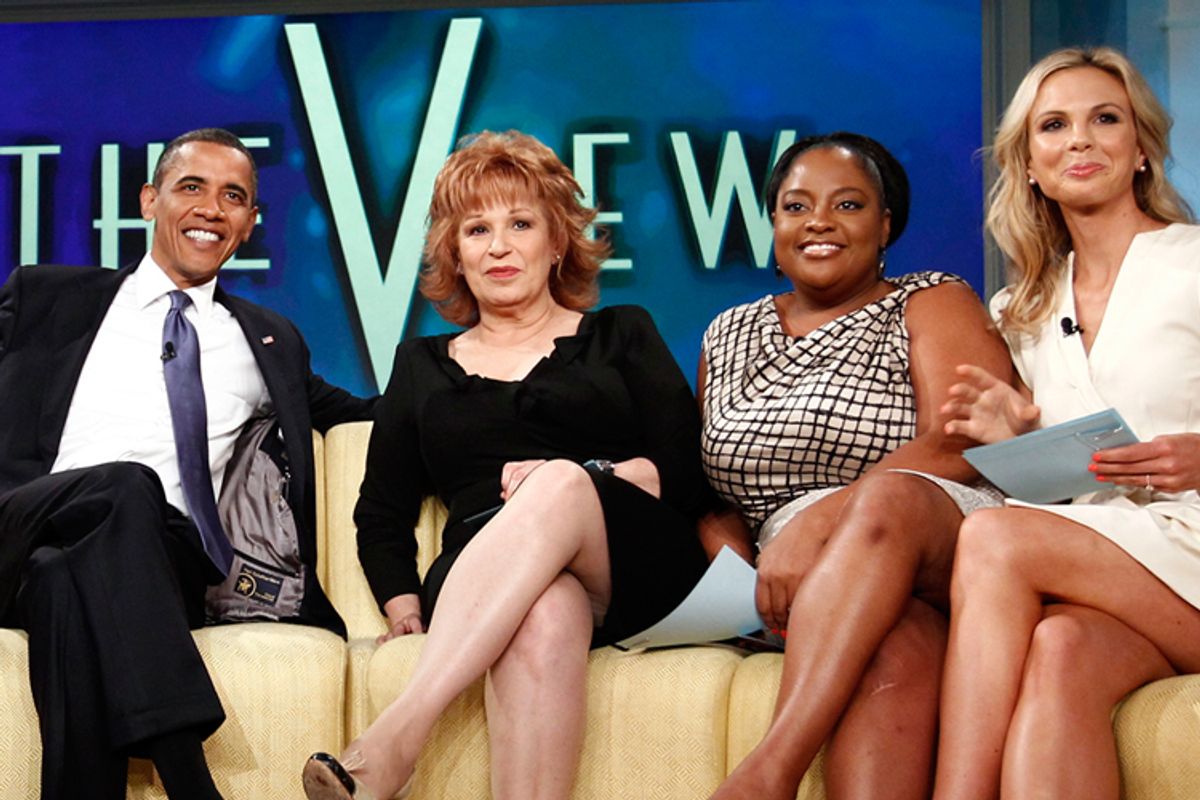 President Obama with Joy Behar, Sherri Shepherd and Elisabeth Hasselbeck on "The View."
--

Well, it's over. History has been made. The institution of the presidency has been degraded. The ratings of ABC daytime have been boosted. Our national identity has been forever altered. President Barack Obama has appeared on "The View."

When it was announced this week that Obama would become the first sitting U.S. president ever to appear on a morning talk show, critics were quick to fly into a hanky-waving frenzy more intense than any since the one that greeted Katie Couric's gravitas-defying move to prime time.

You'd think that the recent surge of female Republican candidates and Tea Party hustlers laying siege to female voters might make a president's decision to appear on a show watched by lots of women perfectly understandable, but no. No one seemed to get that, so intent were they on further dismissing the still-exotic merging of politics and femininity.

Pennsylvania Gov. Ed Rendell opined that the "president has to go on serious shows"; former "View" co-host Rosie O'Donnell sniffed at the idea of Obama doing "fluffy daytime shows." A "Nightline" segment on the appearance concluded with a voice-over piped in over a picture of Obama with his wife and daughters: "After all, being constantly surrounded by women is well within Mr. Obama's comfort zone"; and MSNBC's Dylan Rattigan showed a photo of the five "View" co-hosts and asked, "Which of these lovely ladies -- each of them lovelier than the next -- will actually ask the president a difficult or challenging question?" A president was going to talk to ladies! For an audience of ... ladies! As conservative columnist S.E. Cupp speculated in her Wednesday column, the show would either be "a momentous occasion worthy of celebration or the end of civilization as we know it."

If only it had been that exciting!

Naturally, most of the squawkers seemed to have forgotten that two years ago, the women of "The View" were the only members of the media man enough to ask John McCain tough questions, directly accuse him of lying during his campaign, and make him squirm so uncomfortably that his wife would later complain that the daytime doyennes had "picked our bones clean." At the time, New York Times columnist Frank Rich called it "the hardest-hitting interrogation McCain has yet faced on television," and grimly joked that Joy Behar "looms as the new Edward R. Murrow."

Since then, "The View" has focused ever more steadily on becoming a politically serious show. In between the celebrity interviews and crazypants Mel Gibson commentary, the group of five women -- notably more diverse in ideology, color, age and experience than most of the mainstream press corps -- have been engaged for several years now in sometimes uproarious, sometimes furious, sometimes inane, and often perfectly smart and nuanced policy debate on issues like healthcare reform, reproductive rights, the stimulus, the wars in Iraq and Afghanistan, and Tea Party politics. According to a February story in the L.A. Times, their audience (of women!) has only grown because of it.

But interviewing a president is not the same thing as yelling at Elisabeth Hasselbeck over coffee, and all the co-hosts, perfectly aware of the fact they would have to bring a decent game, seemed determined to do their best. Walters returned from a medical leave after heart surgery, just in time for Whoopi Goldberg to announce "We're making American history!"

Obama, typically dapper and relaxed, made a few cracks about the couch being made for littler people than he before settling in and preparing to face his squad of interrogators. Did he actually think, Walters wondered, that "being on a show with a bunch of five women who never shut up is going to be calming?" He replied, only a little patronizingly, that he chose "The View" because he "was trying to find a show that Michelle actually watched … All those news shows, she's like, eh, let me get the clicker."

Walters started slow, asking him about the president's recent highlights (the family vacation weekend in Maine!) and lowlights (every other thing that has happened in the past few months!). Obama used the opportunity to point out how many jobs the country had been losing when he took office, how fast the economy had been shrinking, and to discuss how gratified he was to see progress being made. "It's not tough for me," he said, comparing himself to the plight of Americans losing jobs and 401Ks. "Those are folks I draw inspiration from."

Walters would later ask the president a very direct question about the recent congressional vote to spend an additional $59 billion on Afghanistan, and about increasing Democratic resistance to the plan. "Why don't we just get out?" she asked bluntly. Obama responded by reminding the audience of his campaign observations about Afghanistan being a mess, noting that this month would see the end of combat operations in Iraq, and discussing the insecure border regions between Pakistan and Afghanistan. He reiterated his plan to stabilize the situation in Afghanistan by July 2011. "I'm not interested in open-ended commitment," he said. "We've got some nation building to do here in the United States and not overseas."

Next up was Behar, not exactly Murrow-esque as she recited a laundry list of all of Obama's achievements as president. But her actual question was a smart one, wondering why, in light of his accomplishments, the right has managed to successfully paint Obama's administration as a disappointment. "The right wing, through Fox News … seem to be hijacking the narrative," observed Behar. "Where's your attack dog?" It was a sharp query, one that gets to the heart of the White House and the Democratic Party's inability to wrest control of partisan message-making. Obama responded that "when times are as tough as they have been, naturally there's going to be a political argument ... I volunteered for this job. And politics ... is a contact sport and you expect people going at you." He did not answer the question about why the left does not have an attack dog as vicious as its ideological opponents'.

Following up was the show's resident Republican, Elisabeth Hasselbeck, who appeared to be quite nervous as she informed the man whom she did not vote for and whom she regularly criticizes on air that it is "truly an honor to have you here today," and wondered why, after all the hope offered by his election and his inauguration, he had not yet been able to successfully unite an increasingly fractured United States. (Note to Hasselbeck: A good deal of it has to do with the anti-Obama right-wing talking points that you often repeat.) Hasselbeck later got more aggressive when asking about why the president's stimulus had not stanched "chronic joblessness" and about his use of the term "saved jobs" as a measure for increased economic stability. "It's frustrating to hear that saved jobs boasting because it doesn't feel that way to Americans when they don't have jobs and are losing jobs," said Hasselbeck. "It makes a difference, though, if your job was one of the ones that's saved," Obama replied.

Sherri Shepherd, the most breathlessly excited of the crew, whiffed on a question about Shirley Sherrod.

Instead of pointedly asking Obama what the hell had happened within his administration that had allowed the USDA official to be fired based on an Andrew Breitbart-manipulated video clip, Shepherd instead used the incident as the launching pad for a broader question: "Do you think America is still racist?"

Obama's response, in which he noted that "a 24-7 media cycle that's often looking for controversy, generated a phony controversy" at first made it sound like he was going to slough off blame for the Sherrod debacle. But he went on to acknowledge that "a lot of people overreacted, including people in my administration."

What Shepherd's question did was kick off the most interesting part of Obama's "View" appearance, an extended exchange about race.

"I'm sure you're old enough to remember this movie, 'Guess Who's Coming to Dinner,'" began Whoopi Goldberg, quoting the line in which Sidney Poitier's character says to his father, "You think of yourself as a Negro man, and I think of myself as a man, and that's the difference." Did Obama, Goldberg want to know, think that that distinction was still relevant today? "I ask you," she said, looking at the president, "what are we? Who are we?"

In a moment in which conversations about race in America have become ever more fraught, ever more charged, ever more complicated, Goldberg's question was almost moving. It was one that was in part made possible by the fact that Goldberg herself is black, that Shepherd is black, that Hasselbeck is Republican, that Behar is liberal, that Walters is older, and that a mix like theirs is not found on the news shows, or late-night talk shows, or sports shows on which Obama has previously appeared. Daytime TV, a genre long marginalized because it was made for and watched by women, has been for decades one of the few places on television hospitable to people who have been marginalized because of race, age, body type, sexuality and class -- people who are not often offered slots on the kinds of news programs that Obama's critics were so scandalized he was eschewing in favor of the daytime rabble.

"We are Americans," replied Obama, sounding like he used to, back before it all got so complicated. "We share common hopes, common dreams, common aspirations … But there is a reptilian side of our brain ... that if somebody looks different or sounds different is cautious. And we have to fight against that."

Here Walters jumped in with another tough, delicate observation. "You do not describe yourself as a black president, but that's the way you're described," she said, pointing out that Obama's mother was white, and that he could easily call himself biracial.

Obama mostly deflected this, noting that he'd written a whole book about his youthful identity crisis and his coming to terms with his racial identity. But then he went on, "African-Americans, we're a mongrel people" -- eliciting an appreciative hoot from Goldberg -- "We're all kinds of mixed up, and that's true of white Americans as well, but we just know more about it. I'm less interested in how we label ourselves than in how we treat each other." It was a pretty tame response, but also -- in this day of heated, angry sound-bite debate about race, patriotism, identity and being an American -- articulate and deeply felt.

All in all, it was not so different from a Sunday morning news show, except that the diversity of people asking Obama questions was greater, and there was one brief segment of the show in which everyone got really squealy and asked him about Justin Bieber, Snooki, tweeting and Lindsay Lohan, Chelsea's wedding and whether or not Mel Gibson needs anger management classes. It was like they got all the shallow stuff people were worried they were going to linger on out of their systems in one brief, giggling fit.

But that, frankly, is precisely the cocktail of high and low -- of informal discourse and free, varied speech, of explosive unpredictability and capable professionalism -- that makes "The View" a perfectly respectable, perfectly weird and therefore perfectly interesting place to sit down for an hour. Even if you're a sitting president.