Maybe a good day for Rangel after all? 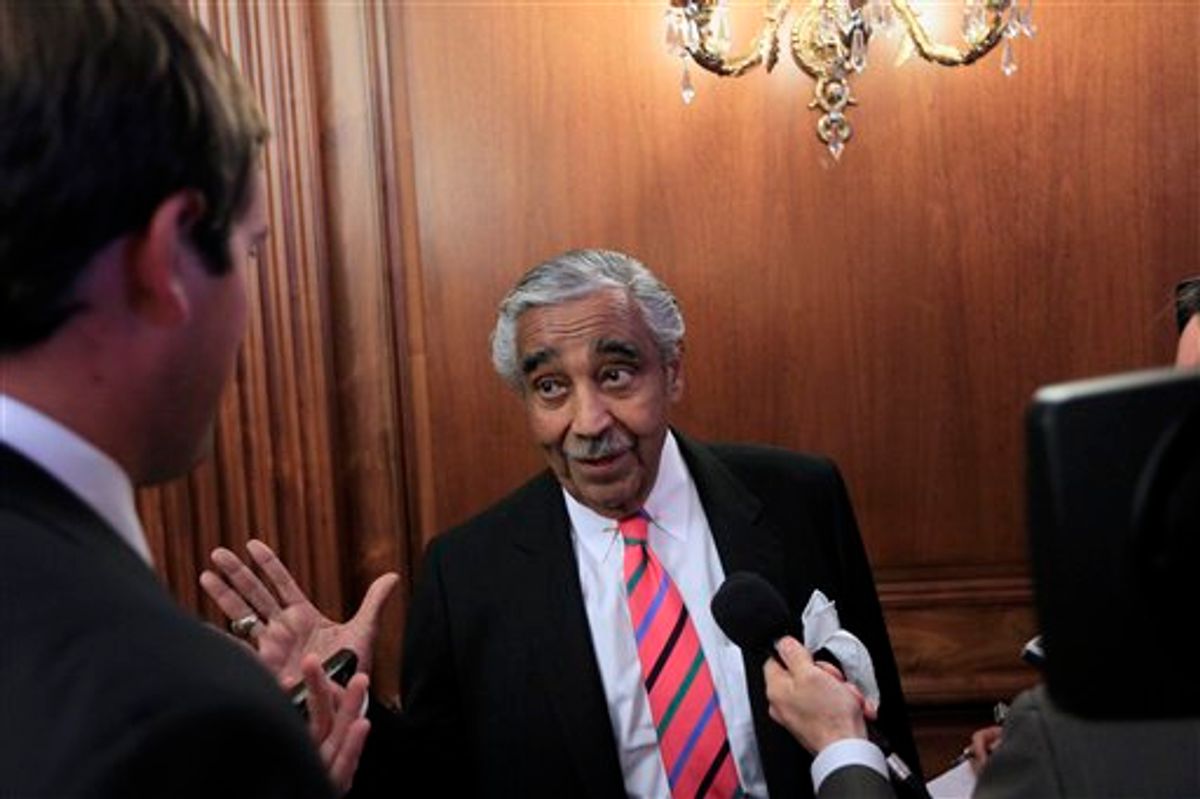 In this July 22, 2010, photo, Rep. Charlie Rangel, D-N.Y., answers questions from the media on Capitol Hill in Washington. House Democratic leaders who promised to "drain the swamp" of corrupt Washington are doing a delicate rhetorical dance around one of their own, 20-term Rangel, as he faces a public trial on ethical misdeeds during a high-stakes midterm election. (AP Photo/Alex Brandon) (AP)
--

[Updated]A dejected Charlie Rangel arrived at the Capitol this morning predicting that, for the first time in six decades, he was about to have a bad day. But it now appears that he's struck a last-minute deal that will allow him to avoid an ethics trial in exchange for an admission of wrongdoing. CBS News, which first reported the deal, says that details should be forthcoming during a 1:00 meeting of the House ethics committee (which was originally scheduled so that the formal charges against Rangel could be aired).

To be sure, this will still be a rough day for Rangel, given that he'll likely have to admit that he knowingly committed serious ethical violations. But by doing so, he'll help himself in two ways:

1) Most of his fellow House Democrats will now resist calling for his resignation from the House. Had the trial gone forward, Rangel would have been confronted with public defections from dozens of his colleagues -- a reality he acknowledged earlier this morning. Presumably, some Democrats -- particularly those in vulnerable seats -- will continue to call for his ouster, but with a deal, the pressure on Rangel for an immediate resignation will abate.

2) By keeping the resignation calls to a minimum, Rangel will be able to hold his seat through the Sept. 14 Democratic primary in New York. And, assuming he still intends to seek reelection, his odds of winning then aren't that bad -- mainly because the Harlem political establishment has stood so firmly behind him, which has insulated him from a top-tier primary challenge. Rangel's main foe, Assemblyman Adam Clayton Powell IV, has serious baggage of his own; his own reputation with the district's voters has suffered as much as Rangel's in recent years. Plus, the presence of several other candidates figures to fracture the anti-Rangel vote, potentially allowing Rangel to survive with significantly less than 50 percent of the vote. And if he wins the primary, victory in November is assured, given the 15th District's overwhelming Democratic bent. (This district is much bluer than the strongly Democratic New Orleans-based district that elected a Republican [Joseph Cao] over the indicted Bill Jefferson in 2008.)

Rangel entered today in danger of being pressured into retirement by his fellow Democrats. It took swallowing his pride, but it now looks like he's gotten them off his back -- and that he'll have a decent chance of returning to the Capitol in January if he wants.

Of course, if he is back for the 112th Congress, it will be as a backbencher. By admitting to ethical violations, Rangel will destroy whatever theoretical chance there was that he'd someday reclaim the Ways and Means Committee gavel he gave up in March.

Update: Maybe not such a not-so-bad day after all. The reports of a deal were premature. After the 1:00 meeting was postponed by several hours, the ethics committee convened late in the afternoon and unveiled 13 charges against Rangel. However, the trial itelf won't start until September, and the New York Times reported that, after today's hearing, "Mr. Rangel's lawyers continued to hope they could still settle the case." The Democratic primary in Rangel's 15th District is set for September 14.