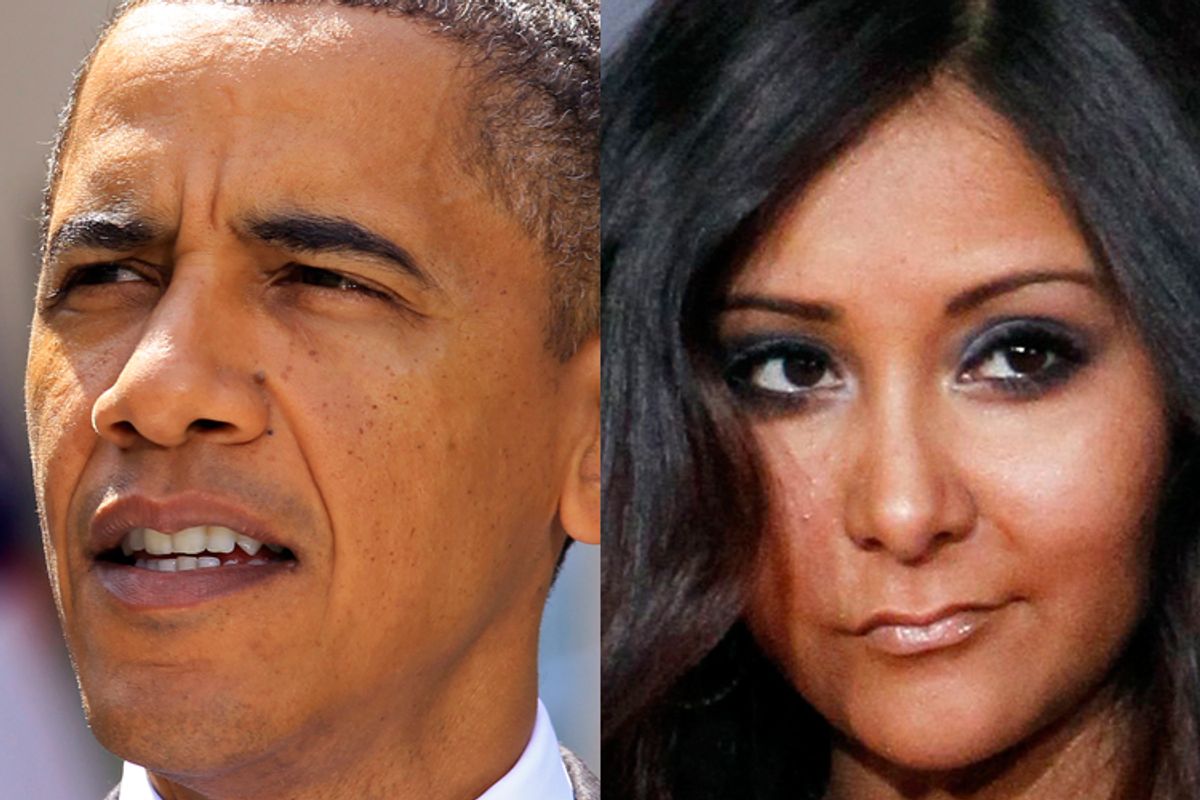 "I don't know who Snooki is," Barack Obama said on "The View" this morning. He even repeated this claim in his speech to the National Urban League.

But as Newsbusters and Jonah Goldberg revealed, Barack Obama is on the record saying her name!

In May, Barack Obama made a joke about how tan Snooki is, at the White House Correspondents Dinner, which proves that he has heard of the famous tiny woman from television.

Jonah Goldberg writes, "I for one demand articles of impeachment be drawn up. Unless, of course, he can blame it all on the TelePrompTer." (He thinks he's joking, but Darrell Issa is chomping at the bit to subpoena the entire "Jersey Shore" cast.)

I went to Free Republic to see what true patriots thought of Obama's shamelessness. Their commenters were unsurprised at NObama's deceit.

Ya, I remember when Obama had said something about Snooki before.

And now he’s trying to act like he doesn’t know about some things in pop culture such as Snooki on that reality show?

Maybe Snooki doesn’t poll well in focus groups, so the prez wants to feign ignorance as to who she is?????

"Never on my watch" says:

He only knows what the teleprompter tells him.

FWIW - I have no idea who or what snookie is.

"cranked" observes that it fits a pattern:

IdiotPOTUS did not know who Ayers was, among a host of other radical progressive/socialist idiots...go figure.

If the Annointed Idiot’s lips are moving, he is lying, period. Understood? =.=

The fact the the President of the United States is answering questions about a slut on a reality TV show shows you just how far our culture has deteriorated since 1776.

Indeed! Our founders never intended for the president to appear on magical speaking-picture boxes, to discuss strumpets.

(I've heard newscasters refer to this "View" appearance as the first time that a sitting president appeared on a daytime talk show. That, of course, is not true. George W. Bush and his wife, Laura, sat down with Dr. Phil in September of 2004. They revealed that they did not spank Jenna and Barbara.)