Jose's got no swagger and Billy's homeless on "SYTYCD"

We finally get to see all of the dancers perform, with nary an injury in sight. Minus Billy's knee brace 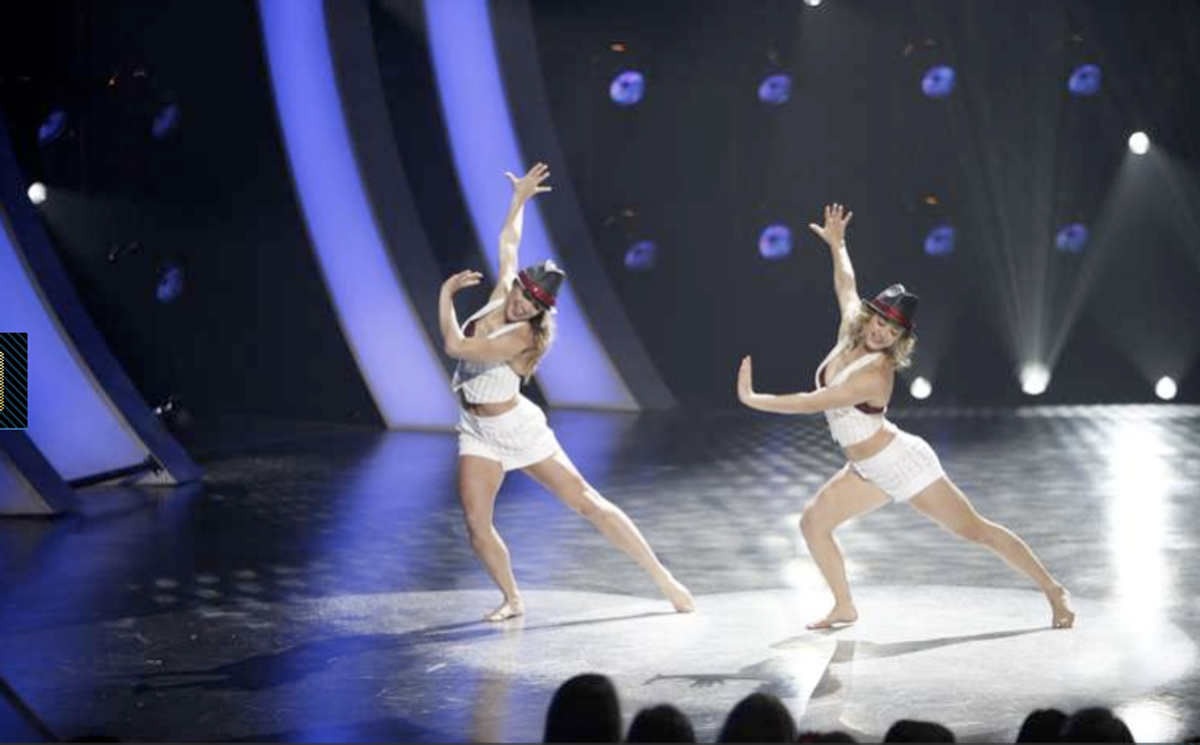 All Star Allison Holker and contestant Lauren Froderman perform a Broadway routine on "So You Think You Can Dance."
--

Two people are going home this week on "So You Think You Can Dance," and I have a sneaking suspicion that my least favorite dancers aren't the same as America's, so ... I'm prepared to be annoyed. After Billy's performance night I would be thrilled if he stayed in the competition, but I don't know that he can muster the votes over Adechike. It's going to take divine intervention to keep Jose on the show, though.

I'm technically on vacation right now, so we're keeping this very, very short (for me.) And I'm sure hearts are breaking as I tell you that I will not be writing a reaction to the elimination Thursday night -- we'll have to commiserate or lament our lost (blank) and (blank) next week.

Lauren: Our resident "lady-dancer," according to Adam, was upbeat and fresh in her Broadway routine with Allison. I was thrilled to finally see two girls perform together, and guest judge Toni Redpath was right -- strong women are sexy. Women don't cease to be hot when the guy leaves the room. Then Lauren made her body undulate freakishly during her foxtrot with the overdressed Adechike (seriously, a sweater vest? Lauren's practically wearing a bathing suit.) She's still great, and getting better.

Adechike: Having no rolling prop in the middle of the stage helped Adechike and Courtney this time -- their "last call" piece a few weeks ago was a blah mess. This time the music was electrifying, though, and the dancing needed to be big, on fire, and I didn't get that. "Manteca," Dizzy Gillespie: perfection. The foxtrot with Lauren was solid, but no matter how hard I've tried I just cannot warm up to Adechike. At all. I'm going to give up, now that we're just a couple of weeks from the finale.

Jose: I've got, like, three things to say about Jose, all of which you've heard before: he tried really hard. He's super-sweet. And it's time for him to go home, albeit totally proud of himself. Jose should have nailed that incredibly cool hip-hop choreographed by Marty Kudelka, but the b-boy couldn't hit the beats, and he had no precision. In the Broadway piece with Kent, Jose's inadequacies were further emphasized, and I'm just over it.

Kent: The choreographers of little Kent's cha cha played to the age divide between him and his All Star Anya, and it worked in his favor. Yes, he's manlier than at the beginning of the season, but not by that much. I agreed with the judges, though, that Kent's Broadway was a Gene Kelly-esque eye-opener. Maybe it was just the suspenders and hat filling my brain with visions of the '40s, but I thought his technique and flair was spot-on and derivative in the best possible way.

Robert: I teared up even before the contemporary piece with Kathryn, as soon as I heard the number was about a loved one going off to war -- I'm a total sap for military themes. Thankfully the actual performances were up to the challenge, from throws to lifts to entwined limbs. Although the tortured cover of a really perky Belinda Carlisle song was a smidge distracting. Then the Bollywood routine with Billy closed out the show, and no matter how good Billy was tonight, Robert wiped the floor with him on this one. Rob's joy was palpable, his motions more emphatic, and he just seemed to give it all up to the dance floor. Awesome.

Billy: Even if Robert out-danced young Mr. Bell in their shared Bollywood number, that doesn't diminish what Billy was able to do, especially on a bum knee that was braced the entire show. He was up, down, up, down with perfect timing, and he was flexible, bright and lively. But the earlier contemporary piece, in which Billy was a homeless man pitted against All Star Ade's upper-class mogul, was truly amazing. The message was embodied perfectly by the contrast in movement, but I didn't feel like I was being preached to. Bell also has the most consistently entertaining solos on the show, period. I'm interested to see what he can do as a choreographer when he grows up.

What I learned, short version: I hate snakeskin print, even on Cat Deeley's carefully jutted hip. We're two weeks from the finale, and I'm exhausted, so I can't even fathom what the actual dancers must be feeling. Otis Redding should be used every week. Stacey Tookey is coming up with the most exciting work on the show this year. And I loved Marty Kudelka and Dana Wilson's hip-hop routine, arranged for Comfort and Adechike. Check out the choreographers themselves -- Kudelka's got a rubbery, relaxed precision and Wilson is just sick, as the kids say: