Anti-Defamation League: "Ground Zero Mosque" shouldn't be built because bigots would get mad 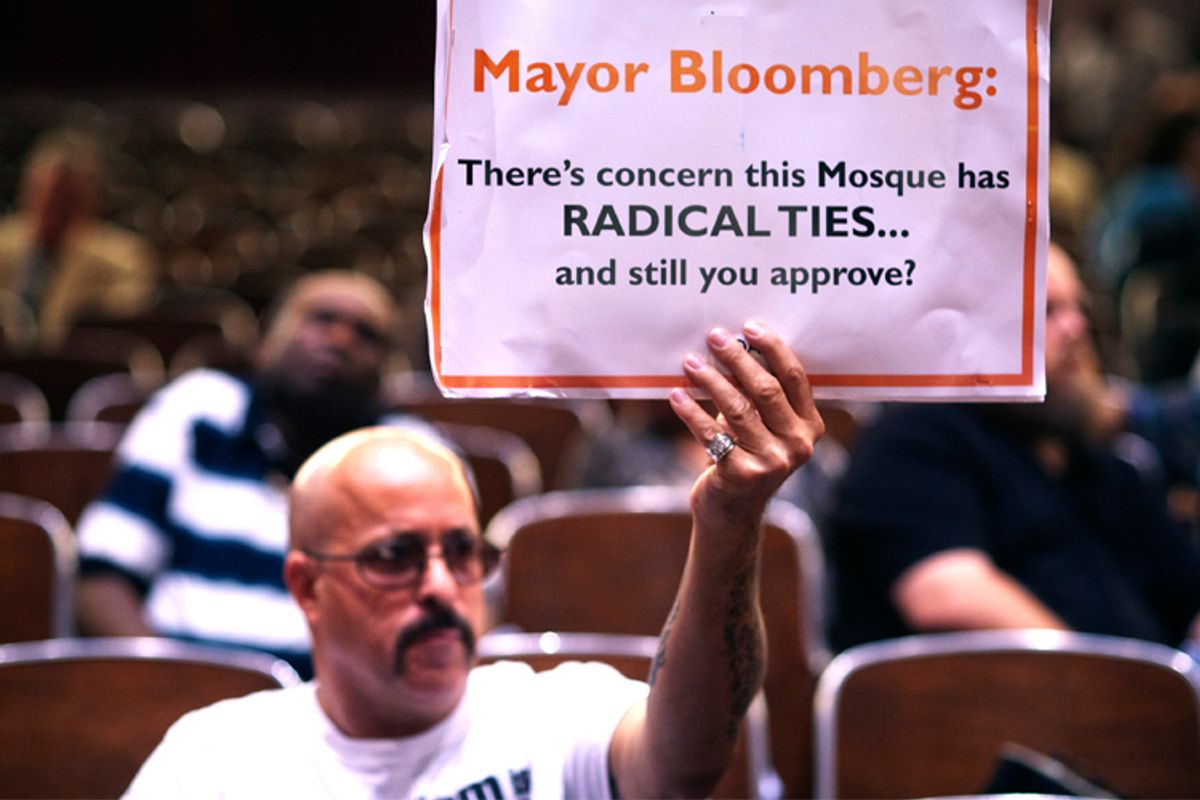 A demonstrator holds a sign during a Landmarks Commission hearing on the proposed Cordoba Mosque to be built near the site of the former World Trade Center.
--

The Anti-Defamation League has come out against the construction of an Islamic Community Center in Lower Manhattan, to be called the Cordoba House. The Cordoba House is also known as "The Ground Zero Mosque," an appellation bestowed on the project by the fear-mongering bigots who've made it the centerpiece of a campaign of anti-Muslim hysteria.

Opposition to the Cordoba House was limited, initially, to right-wing populist kooks like the editorial board of the New York Post, and their rage-columnist Andrew Peyser. Then it went national, as people who know damn well what they're doing stoked ethnic resentments and encouraged plenty of otherwise decent people to give in to base fears of scary Arabs who want to kill you, all of you, because that is their nature.

The Anti-Defamation League, which exists, in theory, to combat anti-semitism, is now promoting Islamaphobia for no real reason other than, you know, lots of other people seem to dislike this mosque thing.

Here's their shameful, mealy-mouthed statement. It begins with boilerplate about the importance of religious freedom:

We regard freedom of religion as a cornerstone of the American democracy, and that freedom must include the right of all Americans – Christian, Jewish, Muslim, and other faiths – to build community centers and houses of worship.

Unless some right-wing bigots stir up enough of a fuss.

We categorically reject appeals to bigotry on the basis of religion, and condemn those whose opposition to this proposed Islamic Center is a manifestation of such bigotry.

Hah, I don't think you guys know what "categorically reject" and "condemn" mean! For future reference: "condemn" does not mean "join."

However, there are understandably strong passions and keen sensitivities surrounding the World Trade Center site. We are ever mindful of the tragedy which befell our nation there, the pain we all still feel – and especially the anguish of the families and friends of those who were killed on September 11, 2001.

The controversy which has emerged regarding the building of an Islamic Center at this location is counterproductive to the healing process. Therefore, under these unique circumstances, we believe the City of New York would be better served if an alternative location could be found.

In recommending that a different location be found for the Islamic Center, we are mindful that some legitimate questions have been raised about who is providing the funding to build it, and what connections, if any, its leaders might have with groups whose ideologies stand in contradiction to our shared values. These questions deserve a response, and we hope those backing the project will be transparent and forthcoming. But regardless of how they respond, the issue at stake is a broader one.

Proponents of the Islamic Center may have every right to build at this site, and may even have chosen the site to send a positive message about Islam. The bigotry some have expressed in attacking them is unfair, and wrong. But ultimately this is not a question of rights, but a question of what is right. In our judgment, building an Islamic Center in the shadow of the World Trade Center will cause some victims more pain – unnecessarily – and that is not right.

So! They categorically reject bigotry, they recognize that freedom of worship is a cornerstone of American democracy, but these Muslims are probably connected to terrorists and while they have the right to build a house of worship anywhere they wish, they probably shouldn't because it would make Newt Gingrich mad.

What a fucking joke.

(Even after a lengthy, well-funded and publicized campaign to promote Islamophobia and invent reasonable-sounding rationales for it, spearheaded by one New York's major daily newspapers, only 36% of Manhattanites oppose construction of the "Ground Zero Mosque.")