Let's not get too excited about Anthony Weiner

It's easy to cheer for him when he lashes out at Republicans, but try to remember what he's really doing 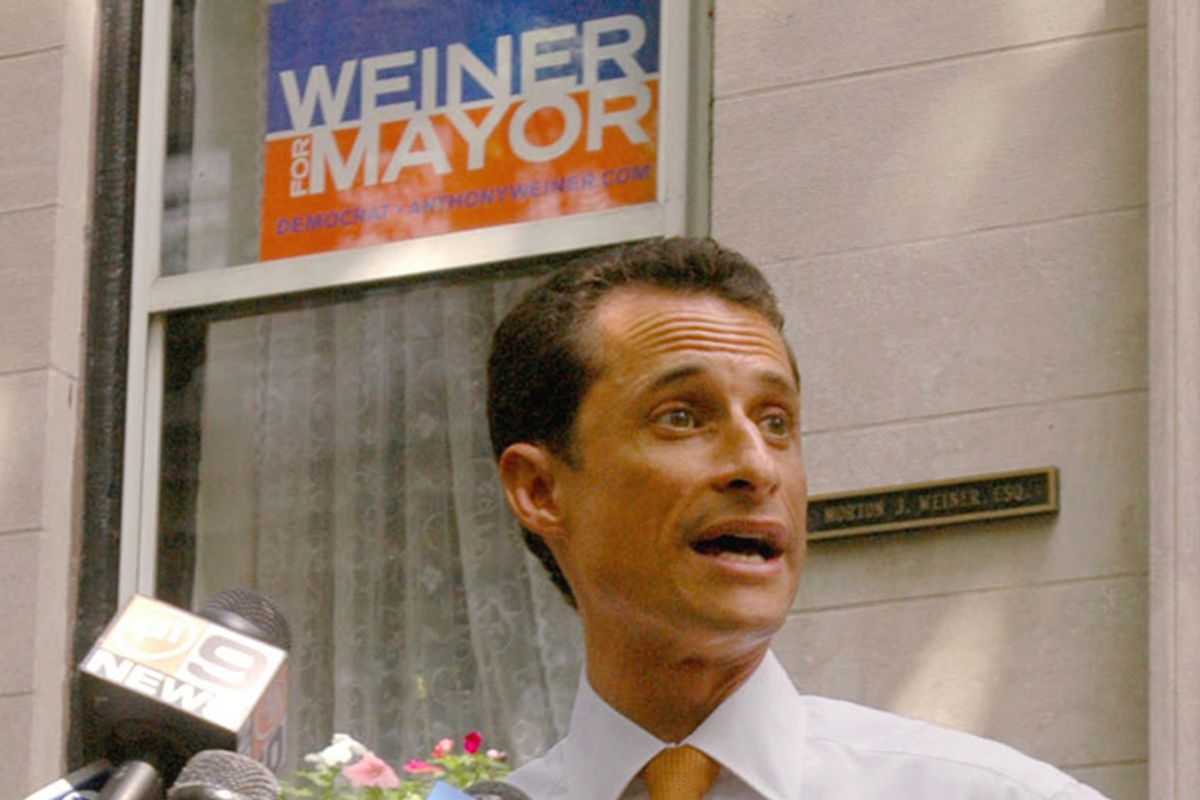 [UPDATED]Oh boy, here we go again: Anthony Weiner put on a show on the House floor last night, the clip went viral, and now left-leaning blogs are singing his praises.

As Alex Pareene noted below, the outrage that Weiner expressed -- over the GOP's use of poison pill amendments to kill a bill that would have provided healthcare to 9/11 first responders -- was certainly justified. And it wasn't the first time he's used the House floor to call out Republican obstructionists in such a blunt fashion. Watching him perform this this, it's easy to cheer for him -- and to lament the absence of similar passion from his Democratic colleagues.

But try not to fall too hard for Weiner. As riveting as they are, his theatrics -- last night and every time he makes noise on the House floor or cable television -- are best understood as part of a shrewd strategy to position Weiner for the 2013 New York mayor's race. Let me explain.

A Chuck Schumer protege who absorbed his old boss' appetite for press coverage, Weiner was elected to the House in 1998 from New York's Brooklyn/Queens-based 9th District. But he wasn't really interested in being in Congress, and set his sights on City Hall instead. (He'd served on the City Council for seven years before winning his House seat.) Consequently, he was a quiet figure on Capitol Hill -- no efforts to move into leadership, to assume a prominent role on major national issues, or to become a key player in any of the factions within the Democratic caucus. He tended to New York more than Washington and, after winning his fourth term, threw himself into the 2005 mayor's race.

Weiner began that contest as a long-shot on the Democratic side. But his retail talents, quick wit and media savvy paid off. In the September '05 preliminary, he finished second, very nearly pushing Freddy Ferrer, who had entered the race as the favorite, into a runoff.

(In fact, initial returns indicated that Weiner had qualified for the runoff, with Ferrer falling just short of the magic 40% mark. In a smart move, Weiner quickly announced that he wouldn't contest the runoff, in in the interests of "unity." This netted him terrific press, and didn't really cost him anything: By that point, with Michael Bloomberg's popularity surging, the Democratic nomination was worthless. Only later did election officials announce that Ferrer had actually finished above the 40% mark anyway.)

Weiner walked away from that '05 contest intent on running again in 2009, and when he returned to the House, his interest in the D.C. game was just as low. (At President Bush's January 2006 State of the Union speech, he seemed to be one of the least engaged members in the chamber.) All systems were go for '09 -- until Bloomberg, facing a retirement he wasn't ready for, muscled an extraordinary change to the city's term limits law through the City Council. Weiner cried foul -- but he also blinked, not wanting to risk a second losing mayoral bid. Better to wait until 2013, when Bloomberg really would be gone. (Of course, that didn't stop Weiner from declaring -- after Democrat Bill Thompson, who was all but abandoned by his party's leaders, came within five points of beating Bloomberg -- that he would have defeated the mayor.)

This put Weiner in a frustrating spot. He'd long planned to be part of the '09 campaign, but suddenly he found himself on the sidelines as it played out. And it's not like he could insert himself into the conversation by speaking out on city issues: Doing that would only stir questions about why he didn't run -- and renew the talk that he'd been afraid to take on the billionaire mayor. Weiner's solution: Ignore the Bloomberg/Thompson race and focus on national issues in Congress -- but do so in a way that would be noticed by the New York electorate.

And so, after a decade of relative anonymity in the House, Weiner suddenly and loudly staked out a provocative, cable television-friendly position on healthcare, as an unapologetic, unflinching single payer advocate. He knew all of the arguments and he knew how to make them: He was a segment producer's dream. The invitations began to pour in. A Lexis/Nexis search of transcripts indicates that Weiner appeared on MSNBC a handful of times in 2006, 2007 and 2008. But the search term "Anthony Weiner AND MSNBC" yields 264 hits since January 1, 2009.

As he became a favorite of Keith and Rachel, Weiner won himself new fans and admirers across the country. Surely, he had no problem with this. But more importantly, he was winning new friends and admirers in New York City. In his '05 bid, his base had been white, working-class outerborough voters  -- the heart of the old Ed Koch coalition. What he was missing were liberals from Manhattan and Brownstone Brooklyn -- the Bella Abzug coalition, as long as we're on the subject of 1970s New York politicians. Making significant inroads with that crowd would make Weiner especially formidable in 2013. And that crowd watches MSNBC and reads left-leaning blogs. For them, seeing Weiner, the candidate of the outerboroughs in '05, passionately embracing single payer was a revelation. As I wrote in another publication at the time:

Of course, Mr. Weiner might be a little less of an absolutist if he were part of the Democratic leadership (or if he were angling to be), but he’s not. His long-term political ambition is still rooted in New York, not Washington. So using a congressional debate to score points with an important New York constituency takes precedence over actually trying to broker a compromise among his House colleagues.

It helps, too, that national media outlets love voices like Weiner’s. He has staked out a clear, unflinching and controversial position on the hottest national issue of the day—and he’s willing to defend it aggressively on hostile turf.

Yes, city elections are won and lost on city issues (well, usually they are; there was Ed Koch with the death penalty back in 1977) and single-payer probably won’t be an issue in the ’13 mayor’s race.

But by talking it up now, Mr. Weiner has built valuable goodwill with liberals. When they hear him talk about city issues in the future, they’ll be far more receptive to what he says.

A year later, Weiner is playing the same game. He's not an especially consequential figure within the House -- his comments about the internal workings of the chamber tend to be more provocative than accurate -- and his theatrics and pronouncements don't really affect legislation. But it doesn't matter to the media, which can't resist drama on the House floor. And it doesn't matter to Weiner, who has pulled off an enviable feat this past year: Distancing himself from New York City politics while simultaneously improving his chances in the next mayor's race.

UPDATE: "Hardball" just started. The lead story is Weiner's rant and Weiner is the lone guest for the first segment. For his first question, Chuck Todd asks Weiner if he regrets his actions last night. The actions that have made him the top story on "Hardball." Yeah, I'm sure he does.