The deception of real-world "Inception" 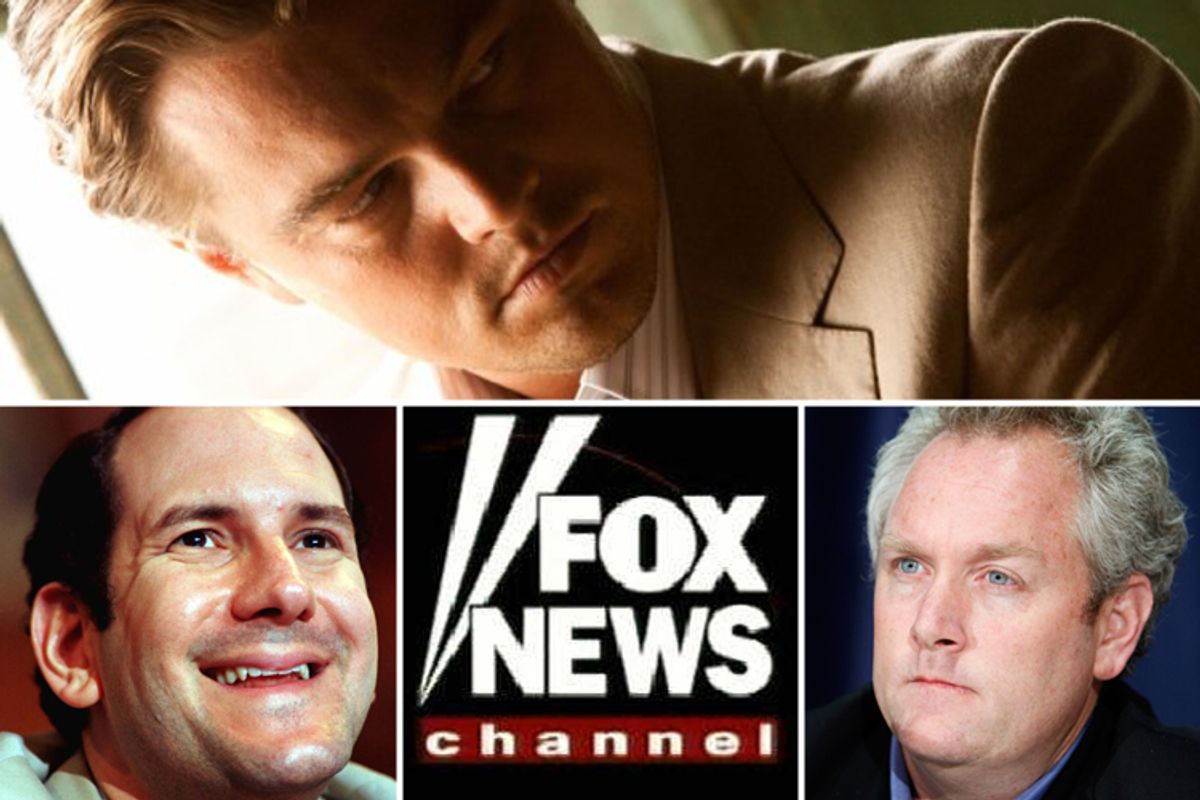 For all of its "Matrix"-like convolutions and "Alice in Wonderland" allusions, the new film "Inception" adds something significant to the ancient ruminations about reality's authenticity -- something profoundly relevant to this epoch of confusion. In the movie's tale of corporate espionage, we are asked to ponder this moment's most disturbing epistemological questions: Namely, how are ideas deposited in people's minds, and how incurable are those ideas when they are wrong?

Many old sci-fi stories, like politics and advertising of the past, subscribed to the "Clockwork Orange" theory that says blatantly propagandistic repetition is the best way to pound concepts into the human brain. But as "Inception's" main character, Cobb, posits, the "most resilient parasite" of all is an idea that individuals are subtly led to think they discovered on their own.

This argument's real-world application was previously outlined by Cal State Fullerton's Nancy Snow, who wrote in 2004 that today's most pervasive and effective propaganda is the kind that is "least noticeable" and consequently "convinces people they are not being manipulated." The flip side is also true: When an idea is obviously propaganda, it loses credibility. Indeed, in the same way the subconscious of "Inception's" characters eviscerates known invaders, we are reflexively hostile to ideas when we know they come from agenda-wielding intruders.

These laws of cognition, of course, are brilliantly exploited by a 24-7 information culture that has succeeded in making "your mind the scene of the crime," as "Inception's" trailer warns. Because we are now so completely immersed in various multimedia dreamscapes, many of the prefabricated -- and often inaccurate -- ideas in those phantasmagorias can seem wholly self-realized and, hence, totally logical.

The conservative media dreamland, for instance, ensconces its audience in an impregnable bubble -- you eat breakfast with the Wall Street Journal's editorial page, you drive to the office with right-wing radio, you flit between Breitbart and Drudge at work, you come home to Fox News. The ideas bouncing around in this world -- say, ideas about the Obama administration allegedly favoring blacks -- don't seem like propaganda to those inside the bubble. With heavily edited videos of screaming pastors and prejudiced-sounding USDA officials, these ideas are cloaked in the veneer of unchallenged fact, leaving the audience to assume its bigoted conclusions are completely self-directed and incontrovertible.

Same thing for those living in the closed loop of the "traditional" media. Replace conservative news outlets with the New York Times, NPR, Washingtonpost.com and network newscasts, and it's just another dreamscape promulgating certain synthetic ideas (for instance, militarism and market fundamentalism), excluding other ideas (say, antiwar opinions and critiques of the free market) and bringing audiences to seemingly self-conceived and rational judgments -- judgments that are tragically misguided.

Taken together, our society has achieved the goal of "Inception's" idea-implanting protagonists -- only without all the technological subterfuge. And just as they arose with Cobb's wife, problems are emerging in our democracy as the dreams sow demonstrable fallacies.

As writer Joe Keohane noted in a recent Boston Globe report about new scientific findings, contravening facts no longer "have the power to change our minds" when we are wrong.

"When misinformed people, particularly political partisans, were exposed to corrected facts in news stories, they rarely changed their minds," he wrote. "In fact, they often became even more strongly set in their beliefs."

What is the circuit breaker in this delusive cycle? It's hard to know if one exists, just as it is difficult to know whether Cobb's totem ever stops spinning. For so many, meticulously constructed fantasies seem like indisputable reality. And because those fantasies' artificial inception is now so deftly obscured, we can no longer wake up, even if facts tell us we're in a dream -- and even when the dream becomes a nightmare.