Roy Rogers' iconic horse lives on, stuffed and high-priced. We take a look inside his recent bizarre auction 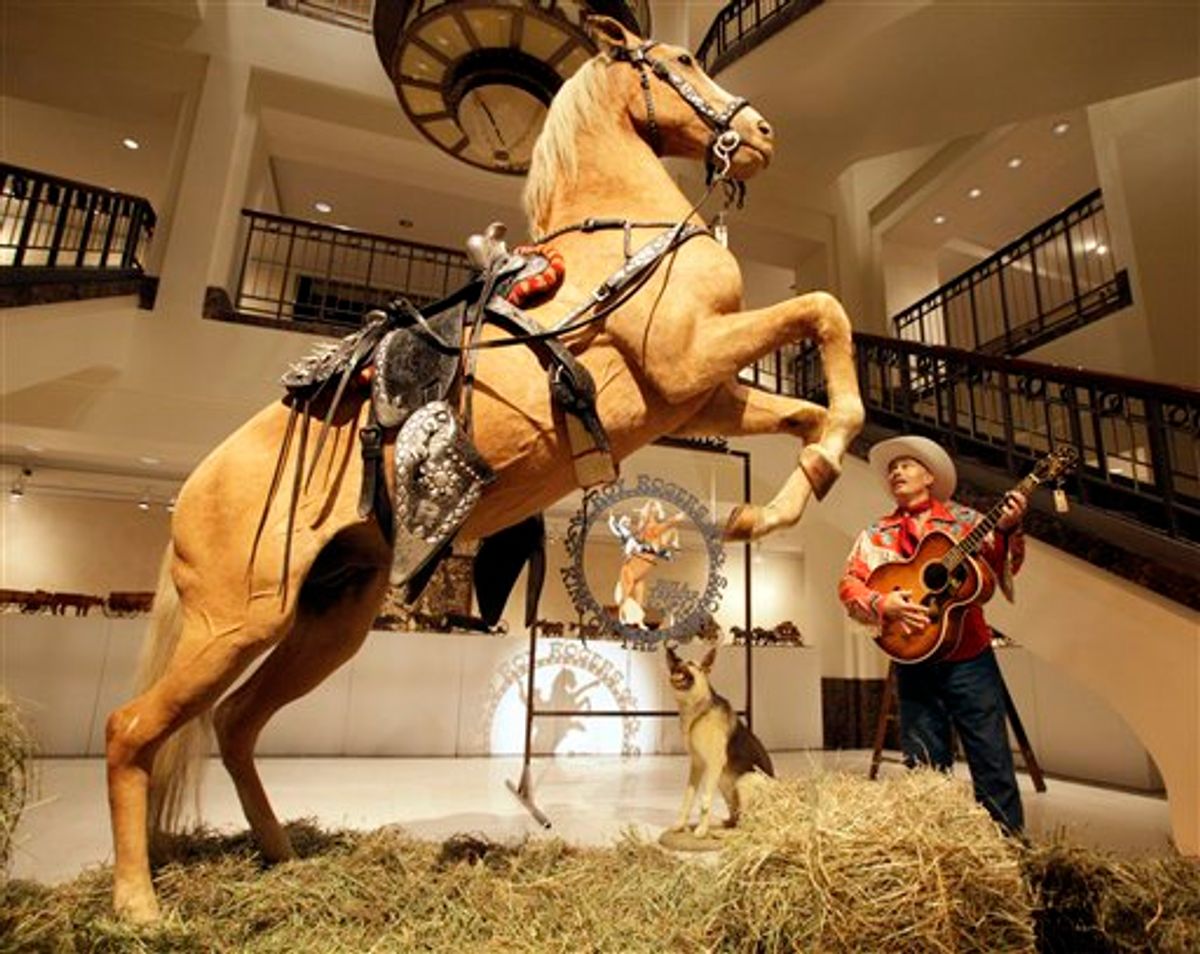 Gil Perez, right, a doorman at Christies auction house, wears an outfit and holds a guitar belonging to Roy Rogers as he stands alongside the preserved remains of Rogers' horse "Trigger" and dog "Bullet" at the New York auction house, Friday, July 9, 2010. Christie's held a preview Friday of an upcoming auction of items from the now-closed Roy Rogers and Dale Evans Museum in Branson, Mo. (AP Photo/Richard Drew) (AP)
--

Back when three TV networks served all of America, people shared the same heroes, the same dreams and the same golden palomino named Trigger. But earlier this month Roy Rogers' faithful sidekick was Lot 38 at Christie's Auction House in Rockefeller Center, the chance of a lifetime for any buckaroo with a spare $200,000 or so. "I'd have to do another 200 root canals to afford Trigger," said Douglas King, a Manhattan dentist in a 10-gallon hat decorated with grouse feathers and a gaping rattlesnake head.

All week long, city slickers, tourists and fans moseyed in off 49th Street to see Trigger (and Bullet, Buttermilk and Trigger Jr.) and to preview the movie star's memorabilia before the big auction on July 14. The powerful steed reared on hind legs in Christie's atrium in the pose made famous on the July 12, 1943, cover of Life magazine. "The Smartest Horse in the Movies" could hula dance, shoot a gun, and untie ropes — everything, it seemed, but read his fan mail (100 letters a week).

Trigger died in 1965, and Roy, inspired by the mounted animals in the Smithsonian, had him preserved by Bischoff's, the taxidermy studio in Hollywood (now Burbank) that has supplied the movies with animal props and trophies since 1922. "Dad just couldn't put him in the ground and let the worms eat him. He was one of the family," said Roy's son, Dusty, a country musician in his mid-60s. Dusty ran his parents' museum for 42 years until the crowds dwindled and the $33,000-a-month rent became a hardship. Taking comfort from his father's advice — "Dad said, 'If it ever gets too much for you, sell it'" — he put the collection on the block. Now he was at the preview, signing catalogs and shaking hands. He wore an immaculate white Stetson, stingray-skin boots, and Roy's saddle-shaped wedding band. "Dad said, 'Son, when I die, just skin me up and put me on top of Trigger and make me happy.' The joke was that Dale would sleep with one eye open 'cause she was afraid she'd be mounted and put on Buttermilk."

It wasn't Trigger alone that moved people but what he represents: an era when the good guys wore white, the bad guys never smiled, and cowboys defined and defended America. "This is one of the most iconic pieces I've ever sold," said auctioneer Cathy Elkies. "And I've sold John Travolta's 'Saturday Night Fever' suit, Rosebud from 'Citizen Kane,' and the dress Marilyn Monroe wore when she sang 'Happy Birthday' to JFK."

Phyllis Zavasky, of the Upper West Side, examined Trigger's proud arched neck, his perked ears, docile eyes, and the way his muscles were articulated, and gasped, "This is a new level of stuffication."

Others were moved by Roy and Dale's Christian values. "What you have here is a very powerful horse that is humbly submissive to his master," explained Ken Smith, a pastor from New Jersey. (Dale Evans once spoke at his church.) Ken and his wife, Carol, were after Western and Native American memorabilia in the $300-$500 range. "My dream object would be Trigger, but we'd have to build a bigger living room," he said.

Dusty walked into a gallery replica of his childhood dining room. He found his old chair, gave the Lazy Susan a whirl, and lifted the milk pitcher that Dale once dumped on his brother, Sandy, who was being a "loudmouth." The law was the law in the Rogers' home and on the set, and the King of Cowboys loved the police. "Dad donated over twenty heads of horse to the New York mounted police every time he came to town for the rodeo," Dusty told Karriem, the security guard. "They had one called Broadway Trigger."

"Back in the Saddle Again" played on auction night as Gil the doorman, in full cowboy attire, welcomed guests. He was Roy's size and was modeling the "Yellow Rose of Texas" shirt, a flamboyant number with pearl buttons and rhinestone fringe designed by Nudie Cohen, "Rodeo Tailor to the Stars." Nudie's granddaughter Jamie (in a Gram Parsons' marijuana jacket) posed for a photo with Trigger. "It's very sad. I could never do this. I'd live in one of Nudie's cars before I'd sell it," she said.

At 6 p.m. everyone was upstairs for the auction. "There's definitely a lot of people from New Mexico here," said Lora Sandorini, who flew in from Santa Fe, to enable her husband in his acquisition of Western goods (he owns 75 pairs of cowboy boots — so far). "He was a stockbroker born in Harlem. He became a cowboy when I wasn't looking. I thought it was a phase. I'm a city slicker, but because he loves it I'll be a cowgirl."

Dusty welcomed the crowd, then broke down in tears and sat below Cathy Elkie's podium. "I can walk by Dad's clothes and still smell him, and that's the hardest part of letting go," Dusty said two days earlier. But he did let go. He watched as Tom Harrower, a rancher from Cheyenne, Wyo., bought the blue plastic saddle Roy invented so he could film in the rain (bad idea; slippery), and as Jamie Nudie bought a trailer her grandfather designed to look like a covered wagon. Roy's 1964 Bonneville convertible (with a Nudie-designed interior complete with14 guns, including a pistol gear shift and pistol door handle) fetched $254,500. And Trigger's sterling silver parade saddle (with Roy's name engraved on the seat plate), designed by Edward H. Bohlin, went for $386,500. The last item on the block that night was Trigger. Bids came in steadily from the house and by phone, until Steve Campione, a trim man in a gray suit, bought Trigger for $266,500. He didn't buy it for himself; he bought it for RFD-TV, an equine-loving, family-values network that plans to display Trigger and Roy's German shepherd, Bullet ($35,000), in its new headquarters in Omaha, Neb. "I started with the company two weeks ago," Campione, the chief financial officer, said, fending off reporters. "You can call Patrick Gottsch, the owner, tomorrow."

Trigger's saddle sold for $120,000 more than Trigger. To some this was baffling. But, then again, Bohlin was famous. No one ever heard of Everett Wilkins, the 86-year-old taxidermist who preserved Trigger with Roy's direct input. He worked at Bischoff's for 50 years. "The taxidermist is in the background. A lot of true craftsmen just aren't mentioned," he lamented by phone from Temple City, Calif. But for him, mounting Trigger was "a lifetime honor. I went to the museum two or three times and saw Trigger. I was proud of the work. I'll always remember him."

Melissa Milgrom is the author of "Still Life: Adventures in Taxidermy."