"The Last Gasp": Can you take the pain out of executions?

What's the future of capital punishment? The author of a new book explains how suffering is shaping the debate 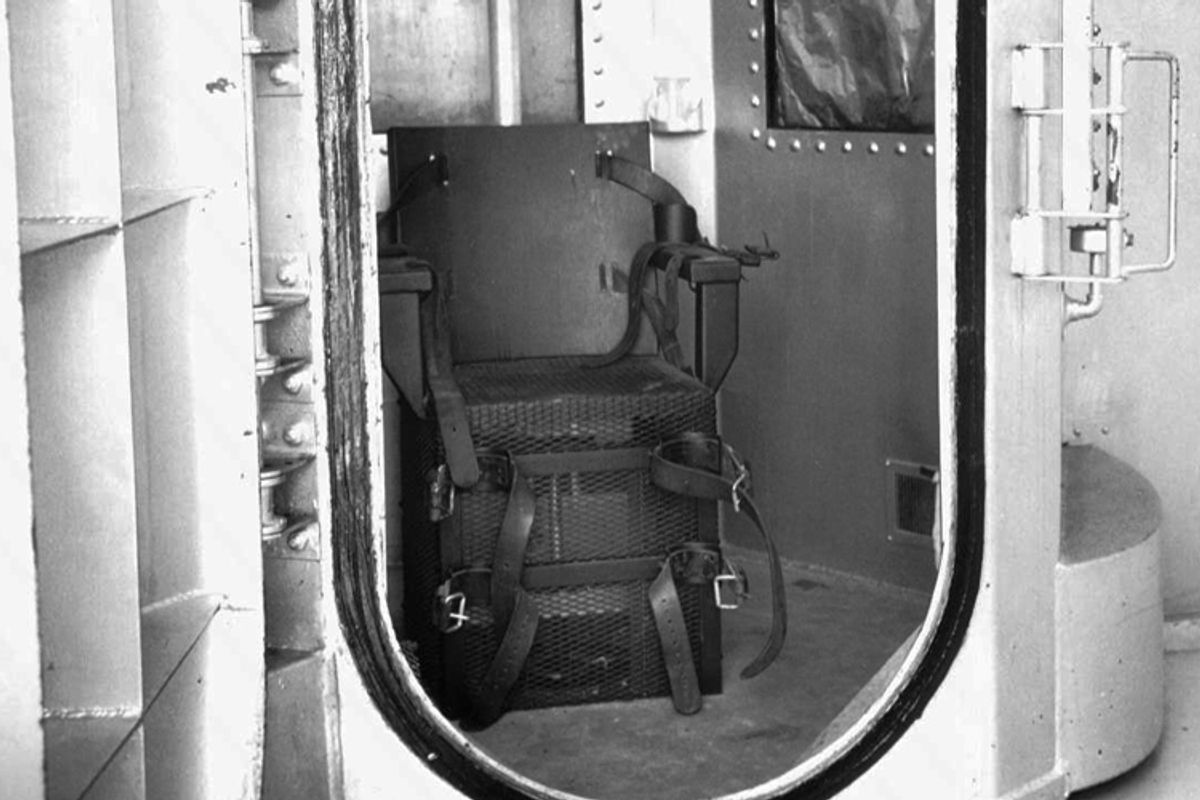 The gas chamber at the Mississippi State Penitentiary in Parchman, Miss.
--

When the state of Utah executed Ronnie Lee Gardner this June, his death became the latest salvo in the ongoing national debate about capital punishment. Gardner's decision to die by the seemingly archaic firing squad -- opting out of the default method of lethal injection -- gave a boost to those who have long argued that the latter is far from a "humane" form of execution. Over the last decade, there has been a growing debate over what constitutes the least painful way to kill a prisoner, with anti-death penalty advocates using the 8th Amendment ban on "cruel and unusual punishment" as the centerpiece of their campaign. It's a strategy that has had winning results in the past. In 1994, when support for capital punishment peaked at a whopping 80 percent, the use of the gas chamber was deemed "cruel and unusual" in court and effectively discontinued as a means of execution. The last execution using poison gas in the United States took place in 1999.

In the context of this current debate, Scott Christianson's newest book, "Last Gasp: the Rise and Fall of the American Gas Chamber," is especially interesting. Christianson, an author, reporter and historian, gives a detailed history of the creation of the gas chamber, explains how it came into use as a seemingly more humane way to execute people and traces the use of poison gas from its American origins to the battlefields of WWI to its use in the Holocaust. The book is both captivating and disturbing -- and despite its strong anti-death penalty stance, remarkably evenhanded.

Salon talked with Christianson about what stories the 21st century might tell, sustained American support for capital punishment, and how to effectively argue at a dinner party.

How did the gas chamber first come about?

Everyone knows the horrors of the Holocaust but most Americans are not aware that the gas chamber was invented in the United States, and was first used in the '20s, to execute criminals. After WWI, which saw the first widespread use of poison gases, it became a method of execution that was actively promoted by Americans who were part of the eugenics movement. They advocated the use of the gas chamber to kill not only criminals but other classes of individuals who were deemed to be unfit or undesirable. There were industrial forces at work as well -- businesspeople who wanted to use some of these poisons for fumigation and other purposes -- which helped increase interest in the idea of death by gas.

But perceptions of the gas chamber changed over time ...

It was thought to kill people very quickly and painlessly. But, belatedly, it was discovered that death by gas was not nearly as fast or as painless as had been assumed. So much so that in 1994, after studying the relevant evidence, a federal judge concluded that it presented a substantial risk of causing extreme pain in prisoners for several minutes before their death and therefore did not pass muster constitutionally. It was  deemed to be cruel and unusual punishment in violation of the 8th Amendment. The decision was upheld by a federal appeals court and the gas chamber was effectively abandoned as a method of execution. But as I point out in the book, this did not happen till decades after its horrific use in Europe and long after most people had become really disenchanted with the gas chamber and realized what a horrible thing it had been.

So it hasn't been technically banned, just effectively abandoned?

It's been a little unclear but it is effectively considered to be cruel and unusual punishment in all states.

There's recently been a lot of litigation surrounding lethal injection, which similarly invokes the 8th Amendment. What do you think the future will be for lethal injection?

In 1973, there was a moratorium on executions in the U.S. and a majority of Americans were opposed to capital punishment. It was Ronald Reagan who suggested that, in place of the gas chamber and other methods of execution, lethal injection be tried because, as he put it, "it's been used on horses and it seems to be a good way to put horses to sleep."  This came at a fortuitous time for conservatives who were beginning to make capital punishment one of their main political issues. They realized that a lot of people were still squeamish about capital punishment based on the experience of the gas chamber and other methods. So lethal injection helped to placate that uneasiness on the part of the American public. But it is increasingly being shown that many complicating factors can make execution by lethal injection much more difficult and problematic than many would assume.

The focus on the 8th Amendment almost allows the pro-death penalty camp to keep finding ways to find more "humane" ways of punishment.

The reality has been that for the last several decades, the majority of the American public has been supportive of capital punishment. There really has not been a strong grass-roots movement in favor of abolishing it. It has been left to a small group of very talented lawyers to try to prevent executions and slow down the progress of the death penalty in America and they've been extremely effective in doing so. But in the process they've had few tools to work with and one of them has been the 8th Amendment; so from time and time you'll see, and I think we will see again, conservatives suggesting that we try another method that is supposedly more humane and skirts the problems of the current method.

This raises one of the paradoxes of the anti-death penalty movement:  I would think that for most anti-death penalty advocates, there is no "humane" solution.  But it's a practical tactic to use the 8th Amendment and target particular forms as "cruel and unusual."

Yes, and it's worth noting that many of people who favor capital punishment don't want a method that is completely painless and easy because they really believe that the person being executed has to be aware that he or she is dying and that it can't be done in a way that removes any element of pain and suffering from the punishment. There are many notions swirling about in this debate that occasionally come into play, and the notion of pain and suffering is certainly one of them.

Speaking of support for capital punishment, approximately 60 percent of Americans still support the death penalty.  Why does it persist in this country when the majority of developed nations have abandoned it?

It's becoming clear to many people in this country that we have a very high number of people in prison and that we are using capital punishment more than many Western nations. When you add it all up, the United States is really quite a punitive nation. And yet, many of the people who created the foundation for this country were sent as slaves, convicts and indentured servants. Our society was built on that -- like Australia, it's very much a part of our DNA.  But we don't want to acknowledge that. We want to put our prisons out of sight, out of mind, and  have executions that seem to not be causing any pain and are carried out out of the public gaze because it doesn't square with our notion of who we are.

What changes do you think the 21st century will bring for capital punishment in this country?

That's a very difficult thing to imagine.  We still have not retreated from this renewed use of torture. I think we have to be very vigilant in regard to capital punishment and make sure that it's something that people take very seriously. In recent months, we are hearing the drums of the ultra-right beating and working people up into a frenzy and the fires of racism once again being stoked in this country.

You're at a dinner party and become engaged with a strong-willed advocate for capital punishment. How would you convince them that they're wrong?

You have to be aware that the government makes mistakes, that the criminal justice system makes mistakes and that it's possible that an innocent person could be wrongfully accused and subjected to capital punishment. So, you'd have to ask the person at the party: Do you think that is acceptable?