Don't call Obama the next LBJ

Afghanistan may be as unwinnable as Vietnam was, but Democrats won't give Obama the boot the way they did with LBJ 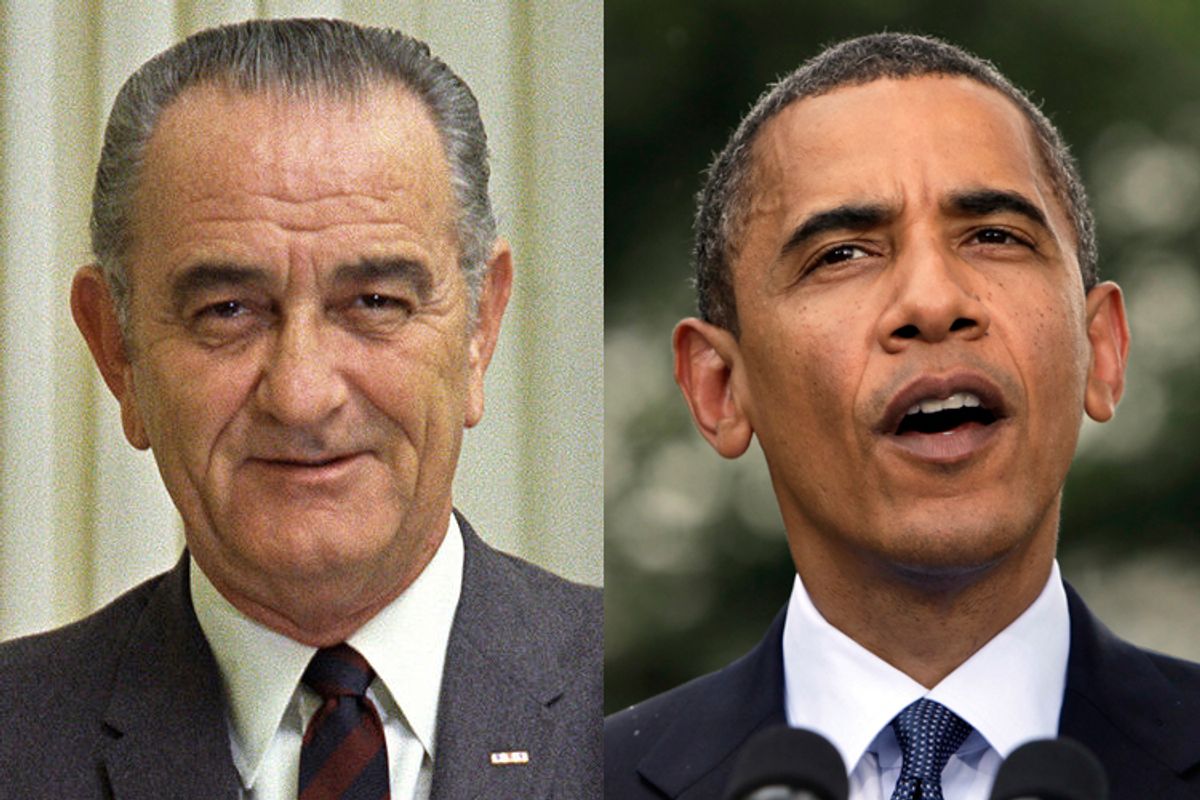 This was the week for comparisons between Barack Obama and Lyndon Johnson -- and it shouldn't have come as a surprise to the current president.

It's what happens when the bleak prospects for "victory" in the war you inherited and escalated are driven home by a massive document leak and by news that monthly casualties are at a new high -- and when more than 100 Democrats in the House desert you on your latest funding request for your war.

The echoes of 1966 and 1967, when LBJ's determined escalation of an unwinnable war in Vietnam began to fracture his political base, were hard to ignore this week. Which is probably why Ed Rendell, the Pennsylvania governor, said on Tuesday that "it's possible" that Obama -- just like LBJ -- will eventually be overwhelmed by a tide of intraparty war dissent and that it will cost him his party's nomination for a second full term in 2012.

Here, though, a reality check is in order: Yes, Afghanistan is going terribly -- and it could end up costing Obama reelection in '12. But it's not going to cost him the Democratic Party's nomination.

Perhaps the key difference is that Obama enjoys a tight and intimate bond with the Democratic base -- the kind of personal relationship that always eluded LBJ. This was reflected in the path that both men took to the presidency. Obama, of course, was a neophyte senator in 2008, just a few years removed from the Illinois state Legislature. If it had been left to his party's power brokers, he'd never have come close to the White House. But his inspiring life story, optimistic message and magnetic personality helped build a grass-roots army that imposed its will on the Democratic establishment.

LBJ, by contrast, was nothing without his power-broker base. When John F. Kennedy tapped him as his running mate in 1960, much of the party's grass roots was indifferent to him -- maybe even hostile (because of his record on civil rights). As a Senate leader, he'd dealt almost exclusively behind closed doors, saying little of substance in public, and his personality inspired no one outside of Washington. Kennedy's murder made him president, but it didn't mean he was the spiritual leader of the Democratic Party.

This protects Obama in two ways that LBJ wasn't.

First, their lingering personal affection for him means that the Democratic base will rationalize sticking with Obama through tough times -- and as he makes decisions that, at least on paper, they don't agree with. Salon's Glenn Greenwald has noted this phenomenon with frustration, as progressives have resisted turning on Obama for maintaining many of the Bush administration's national security practices -- even after he campaigned against them in '08.

LBJ didn't enjoy such immunity. The party stood with him as he pushed massive social welfare programs through Congress in the first years of his presidency, but when the folly of Vietnam became clear, he faced a grass-roots uprising. College students who had never liked LBJ much to begin with (and who faced the prospect of being drafted into his war) got "clean for Gene" and formed that backbone of Sen. Eugene McCarthy's 1968 primary challenge to the president. Today, there's no draft, and college-age voters are likely to be the most devoted Obama loyalists -- even with the war raging.

Second, Obama's rock star status within his party means that there's no bigger personality waiting to grab the spotlight from him. Not so for LBJ, who knew from the instant he assumed that presidency that Robert F. Kennedy, the beloved brother of the party base's fallen hero, would take it away from him if he ever got the chance. The contrast between the 2008 and 1964 Democratic conventions is telling. In Denver, demand from the grass roots to see Obama was so high that the proceedings were moved to an 80,000-seat football stadium for his acceptance speech. In Atlantic City, though, LBJ wasn't even the main attraction: The only speech that delegates really wanted to hear -- and the only one they talked about afterward -- was RFK's.

Thus, by mid-1967, polls showed RFK leading LBJ among Democrats by wide margins -- 20 points in a Harris survey and 12 in a Gallup poll. When McCarthy jumped in the race in November '67, it was widely assumed that he was a Kennedy stalking horse -- sent to weaken the president so that Bobby could then jump in and finish him off. This wasn't exactly true -- McCarthy was his own man to the end -- but that's exactly how things played out: McCarthy came within 8 points of knocking off LBJ in New Hampshire, after which RFK announced his candidacy. Two weeks later, LBJ called it quits.

If there is an RFK equivalent in today's Democratic Party, it's Obama. Try coming up with a list of potential challengers for '12, and the stature gap becomes immediately apparent: Howard Dean? Russ Feingold? Dennis Kucinich? If McCarthy had been his sole threat, LBJ could probably have claimed the nomination in '68. But not with RFK in the picture. For Obama, the dynamics are totally different.

Moreover, McCarthy's surprising performance in New Hampshire -- the all-important first domino in LBJ's rapid demise -- was the product of some particularly poor timing for the president. With the war losing favor, the White House spent the winter of '67-'68 engaged in an intense P.R. campaign, bombarding the country with statistics, anecdotes and pronouncements that supposedly showed major progress on the ground. But then came the Tet Offensive, which played out in the weeks immediately before the New Hampshire primary, making a mockery of the administration's claims and filling Granite State voters with a desire to deliver a message to the White House.

Obama still has time to avoid a similar confluence of events. He's pledged to revisit his Afghanistan strategy at the end of this year and to begin some kind of troop drawdown next year. A full withdrawal by 2012 won’t happen. But Obama can still satisfy Democratic voters -- voters who badly want to believe in him and who have shown a willingness to rationalize when it comes to his decisions -- that one will take place his second term.