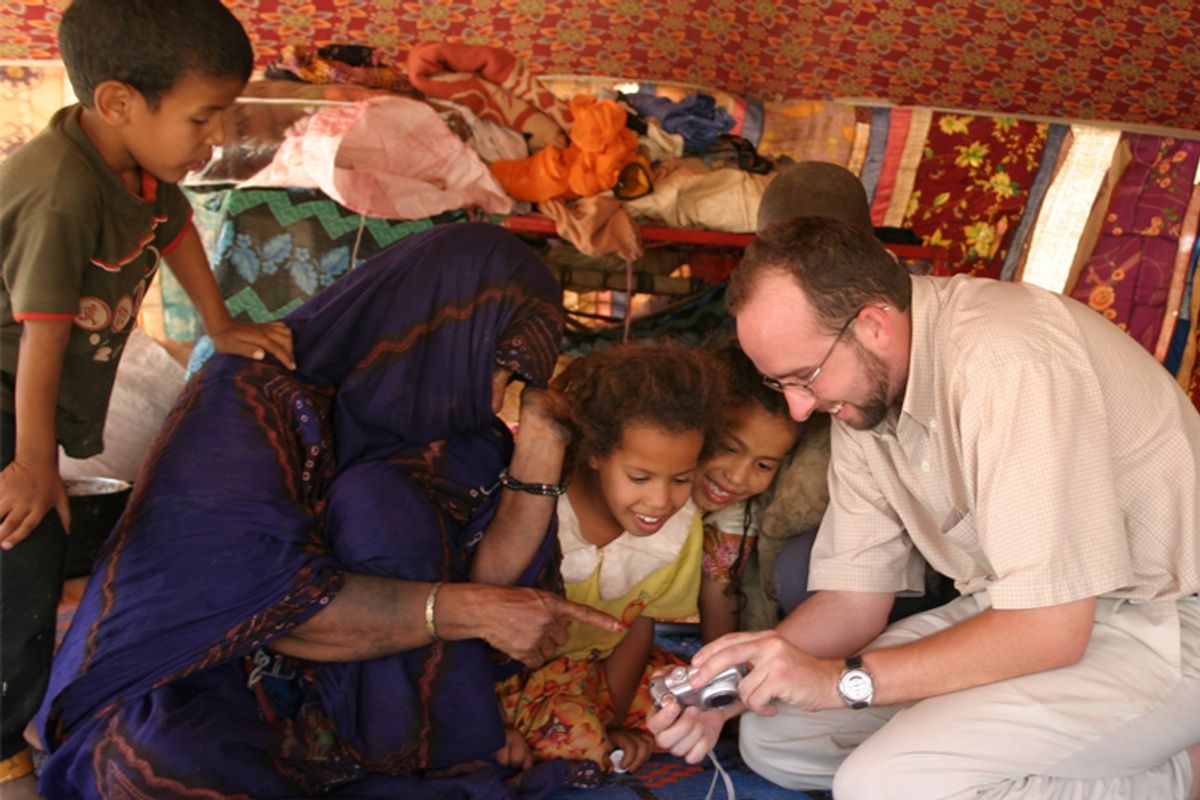 Bedouins in their tent near the village of Maatamoulana, Mauritania, seeing their digitized faces for the first time.
--

A growing chorus of Americans have, to use Sarah Palin’s apt term, "refudiated" the project to build a lower Manhattan Muslim community center called Park51, one of whose 13 stories is to include a mosque and religious center. Many in this coalition of the refudiators are right-wing propagandists who make their living marketing a version of the fantastical "Eurabia" craze sweeping Europe. Yet inconveniently, the coalition includes many 9/11 victims’ families and a lot of otherwise reasonable Americans who deeply feel the project is a "slap in the face" and a "provocation."

Of course, critics of the refudiators can latch onto any number of ludicrous statements, such as Newt Gingrich’s assertion that extending religious freedom to Muslims is a sign of "weakness and submission" to terrorists: "There should be no mosque near Ground Zero in New York so long as there are no churches or synagogues in Saudi Arabia." Perhaps, after John Hagee becomes holy emperor of America, we can start banning religions. But then there are more earnest pleas like that of a former New York City firefighter: "Stop hurting the families ... They're hurting the families again ... They don't deserve it. These American families have paid too much."

Who are the "they" who are hurting families "again"? As an anthropologist, I’m trained to refrain from criticizing people’s honest sentiments, especially those of heroic firefighters, long enough to stand back and try to understand how these sentiments seem to make sense according to certain premises. I think the common premise to all these views is that they assume a "clash of civilizations." That is, the unspoken assumption is that another civilization ("they") attacked "us" on 9/11, and those building this community center (also "they") are part of that civilization.

According to the "clash of civilizations" theory -- a phrase coined in 1992 by the Orientalist Bernard Lewis and turned into a respectable scientific theory by Harvard professor Samuel Huntington -- there is this thing called "Islamic civilization" that is essentially contrary to "Western civilization," as evidenced by the 9/11 attacks, the Taliban, Saddam Hussein, the Crusades and the many other conflicts between "Islam" and "the West." If a Muslim attacks a Westerner, this act automatically appears to be an act on behalf of this "Islamic civilization" against "Western civilization." According to Huntington, "the fundamental source of conflict" in the post-Cold War era "will be cultural," especially between the West and Islam.

In a sense, the theory is right: We humans tend to understand conflicts in terms of "us" and "them," a group of people who speak with one voice and are fundamentally different from "us." Consider another terrorist attack, this time by Christians on Christians. During the IRA heyday in the 1980s, how often did we block Catholics from immigrating or building churches, or insist that they make repeated public declarations against all Catholic violence and then still refuse to believe them? How many controversies have surrounded building Protestant churches in Oklahoma City because "the Protestants" bombed the "us" there? Of course, the IRA and Oklahoma City bombings were carried out by deranged individuals; 9/11 was perpetrated by "the Muslims." "They" did this to "us," now "they" want to build a mosque to rub it in "our" faces. Curiously, the thought that these two "theys" might not refer to the same agent, or even that the second "they" (American Muslims, an inter-faith board of directors) might actually be part of the "us" doesn’t seem to occur as a logical possibility.

What if we were to think of the clash not as being between one civilization and another but between cosmopolitanism and anti-cosmopolitanism -- between those who see cultural others as potential friends and those who see cultural difference as an existential divide and threat? The ancient Greek Cynics coined the term "cosmopolitan" (literally "citizen of the world") to suggest, with some irony, that their community was not the city-state (polis) but the whole world. Cosmopolitans and anti-cosmopolitans exist in every culture and subscribe to every religion. And in every culture they clash with one another.

The eminent anti-cosmopolitans who developed the "clash of civilization" thesis argued that insurmountable cultural barriers between peoples explain why there are so many conflicts in the world. Despite its being catastrophically wrong, their theory is very useful in a way, because it expresses in respectable, academic language the visceral feelings we all have when we feel attacked or threatened. If someone I see as very different from me insults someone I see as more similar to me, I tend to feel as though "those people" insulted "my people" because of some fundamental difference between us and them. If my brother insults me, I instinctively assume it’s simply because he (but not necessarily all other Americans) is a jerk.

I realized the resonance of the "clash of civilizations" idea when I went to study Arabic with Bedouin scholars in the Mauritanian Sahara in 2003. I didn’t know what to expect from Mauritanians, but I had vaguely imagined them to be more familiar with camels than with Western academic theories. Shortly after arriving, a Bedouin shaykh offered me some tea and asked me what I thought of the "clash of civilizations" between his people and mine.

Now, the Iraq war had just started, and these Bedouins had good reason to entertain Huntington’s theory. But the longer I stayed in Mauritania, the more I was impressed by their highly cosmopolitan reading of Islam. They loved quoting the Quranic verse "We created you as nations and tribes so that you might come to know one another." They told me that their religion obliges them to welcome all guests, regardless of religion or political persuasion (or lack thereof) -- even George W. Bush or Ariel Sharon. (Remember that these two men were waging war on Muslims at the time.) On Sept. 11, 2001, the village shaykh summoned all the villagers to a meeting to say in the strongest terms that nothing could be further from Islam’s message than killing innocent people.

Mauritania taught me that the "clash of civilizations" is not just a Harvard professor’s theory or political propaganda but something deeply felt around the world. It’s one of a few things conservatives and Osama bin Laden can actually agree on. But Mauritania also taught me that even Bedouins who wear traditional robes and (in the case of women) veil themselves, herd goats and camels, and memorize the Quran can be cosmopolitan.

In this light, it doesn’t surprise me that, after 9/11, many Americans feel profoundly uneasy about Muslims as a category. Even experienced commentators like Thomas Friedman constantly present terrorism as every Muslim’s problem and (falsely) repeat that "mainstream" and "moderate" Muslims have not spoken out to condemn the terrorists in their midst. For the record, he’s dead wrong: Aside from proud extremists like the Taliban, nearly every Muslim country and organization has denounced terrorism in the strongest terms, and the thousands of Muslims I have met throughout Africa and the Middle East are at least as outraged as your average American -- and not afraid to say it -- at how terrorists drag their beloved religion through the mud. Yet it’s easier to listen to someone like Thomas Friedman who looks more or less like "us" and publishes in the New York Times than to go read what a true-to-life Muslim has to say or, better yet, talk to one.

However accurately the "clash of civilizations" theory may represent the viscerally "anti-cosmopolitan" feeling we all have when we feel attacked, the theory is uniformly disastrous when put into practice. It simplifies conflicts that have complex historical, political and economic causes, convincing us that the source of these conflicts is some stereotyped cultural difference, and that the solution must therefore be cultural as well -- either annihilating one culture, isolating incompatible cultures from one another, or "helping" one culture become more like another.

Actually, we’re all a lot more similar than we are different, but because this notion of clash feels so natural, especially when we feel threatened, many politicians and other powerful people find it a convenient way to mobilize large numbers of people behind whatever special interests they represent. If you want cheap oil, it’s a lot easier to convince people to kill for it if they’re convinced they’re killing morally inferior people in the name of civilization. If you want more land, it’s easier to convince people to take it for you if you take it from people who look different and believe in God differently. You might convince me that the French are pansies, but good luck convincing me they're barbarians and need us to manage their resources. I know better -- they sort of remind me of myself.

As natural as it might feel to conclude that "the Muslims" attacked us and "they" now want to build a mosque, this feeling is based on a dangerous confusion over who the "us" and "them" really are, a confusion that blinds us to the possibility that many Muslims might identify with "us" against the terrorists, appreciate secular government, believe in human rights and equality, and simply want to work hard and have a decent life just like us. It’s precisely this same confusion that Bush systematically manipulated when he created mental associations between 9/11 and Saddam Hussein to make Americans feel that Iraq was part of the "them" that attacked the United States.

Cosmopolitanism isn’t mushy-headed "tolerance" or "open-mindedness" (or "multiculturalism," as right-wing politicians never tire of saying). It’s the insistence that we all share a common humanity and the refusal to allow culture to be used as a weapon or a facile explanation. Likewise, anti-cosmopolitanism (the "clash of civilizations" narrative) is not simply a culture of closed-mindedness. It’s a tool that powerful people use to convince ordinary, well-meaning people that "we" are fundamentally different from "them." For thousands of years, it has justified plunder and oppression in the name of a civilization’s highest values, sacrificing the interests of foot soldiers on all sides for the interest of the powerful. Perhaps what many fear so much about the Park51 is precisely that one of its aims is to humanize Muslims and make them seem less "foreign." This is a serious threat to those whose big projects depend on selling a clash of civilizations.

The Anti-Defamation League says that building Park51 at this juncture would be "counter-productive to the healing process" after 9/11. To those who feel this way, let me suggest a more productive (yet perhaps initially less comfortable) way to heal: Get to know some Muslims, talk to them honestly and openly, and learn from them (not from pundits) about how they perceive their beliefs and their place in America. You may come to see them as part of the same America that was attacked, and you might find that they are as pained by 9/11 as you are. Perhaps the most important part of the healing process will be coming to terms with the idea that "Islam" didn’t attack America but is part of America.

An anti-cosmopolitan closure is an understandable initial response to tragedy, yet cosmopolitan openness is a better way to move forward.

Joseph Hill has a Ph.D. from Yale University and teaches Anthropology at the American University in Cairo. He has been conducting research in West and North Africa since 1998 and is currently writing a book on female Islamic leaders in Senegal.