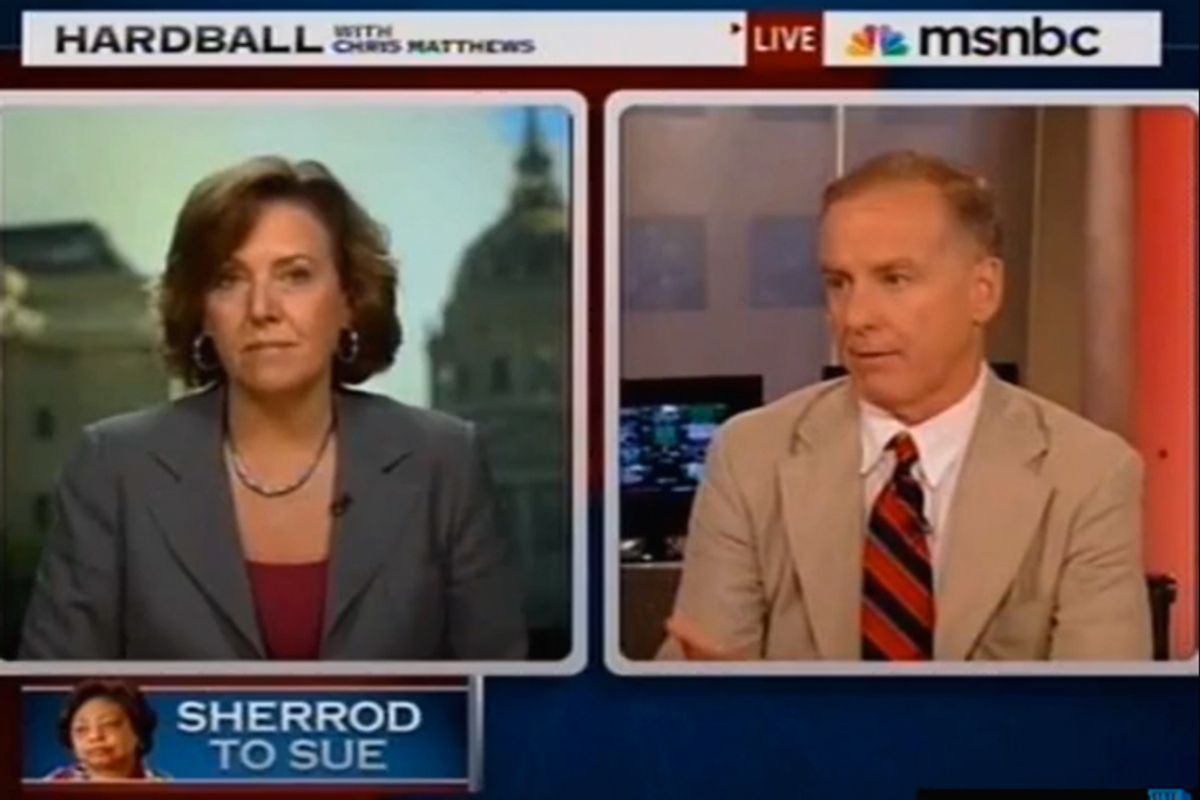 I've already said I'd give Charles Sherrod the last word on the story of his family's smearing by right-wing media. But I had more than a few thoughts on Howard Kurtz's provocative Washington Post column, "In journalism's crossfire culture, everyone gets wounded." I'll try to stick to the media critique and leave the Sherrods out of it where possible.

In just the last few weeks, Salon Editor in Chief Joan Walsh and CNBC contributor Howard Dean have accused Fox News of racism; conservative crusader Andrew Breitbart has delighted in pushing a maliciously edited video smearing Shirley Sherrod and refused to apologize; Fox hosts have denounced mainstream organizations as Obama lap dogs for downplaying a case involving the New Black Panther Party; e-mails from an off-the-record discussion group showed one liberal pundit wishing for Rush Limbaugh's death and another suggesting that conservatives such as Fred Barnes be tarred as racist; Rolling Stone's Michael Hastings was accused of betraying journalistic ethics with the story that torpedoed Gen. Stanley McChrystal, and Hastings's critics were ripped as lackeys of the military establishment.

It's journalism as blood sport, performed for the masses.

Let me start with this: I'll let you all decide whether I deserved to be the first example, but certainly Howard Dean didn't. For one thing, he's a politician who happens to do political commentary on television, not a journalist. In a story critiquing "journalism as blood sport," he doesn't fit. I think it's also fair to point out that Dean and I were responding to the smearing of Shirley Sherrod; the right-wing noise machine did the smearing. I'm sure Kurtz didn't list us first to say we started it, but it kind of read that way.

I have to generally take issue with the folks Kurtz described as "journalists." (I know, that can get as juvenile as "who started it?")  Andrew Breitbart is someone who has declared "I want to bring down the institutional left," and who has cloddishly gone about trying to do that, going after ACORN with his deceptively edited videos, then doing the same thing to the NAACP and Sherrod. (The NAACP covered itself with shame in the mess, but not for the reasons Breitbart was trying to savage the group.) He's not an example of "journalists" suddenly gone bad.

Likewise, Shirley Sherrod is not a journalist, but Kurtz nonetheless shoehorns her into this column, rapping her for calling Fox and Breitbart racist. This is the very point that got me into trouble with Kurtz in the first place: It was on his very own CNN "Reliable Sources" last Sunday that I savaged Fox as racist, after he and Breitbart contributor Matt Lewis began to make Sherrod out to be one of the bad guys in the situation, for her intemperate remarks about Fox. Conservative pinheads have been needling me ever since, for answering the question "Does Sherrod deserve a pass?" for such language, by saying, in exasperation, "Yes."

I have to say again: I'm not here to give Sherrod a pass or take it away. After the show, I also laid out why I think it's fair to criticize Fox on race: From its crusade against Van Jones (black) to ACORN employees (black) to the New Black Panther Party story (blackity-black) to Shirley Sherrod (yes, black again!), the network run by Richard Nixon strategist Roger Ailes has a weakness for scary stories about black people, especially now that we have a black president. I called it "The Fox News 50-state Southern Strategy." Kurtz features me crying racism, then fails to quote my reasons. I don't think everyone at Fox is racist, or is motivated by racism. But conservatives have been using race against liberals for my whole lifetime, and I think it's important to spell out what they're doing.

I e-mailed Howard Dean for comment about Kurtz's column, and he was more combative.

Howie Kurtz misses the point. Roughness in political discourse has a history older than the Republic. Tolerating racism should not be part of it. Media Matters has a great piece last week documenting Fox's history of race baiting going back many years. I said what I said, on Fox Network, because I thought they needed to be called on it.

Calling out the right wing has become a rare commodity among journalists and Democrats. All scurrilous attacks are not equal, and you can wring your hands over personal attacks all you want, but appealing to racial, religious, and ethnic fears and anger is a prescription for grave danger for our country. In the presence of the strongest protections for free speech in the world, all we have to fight this danger is moral suasion. We ought to use it more often, and more consistently.