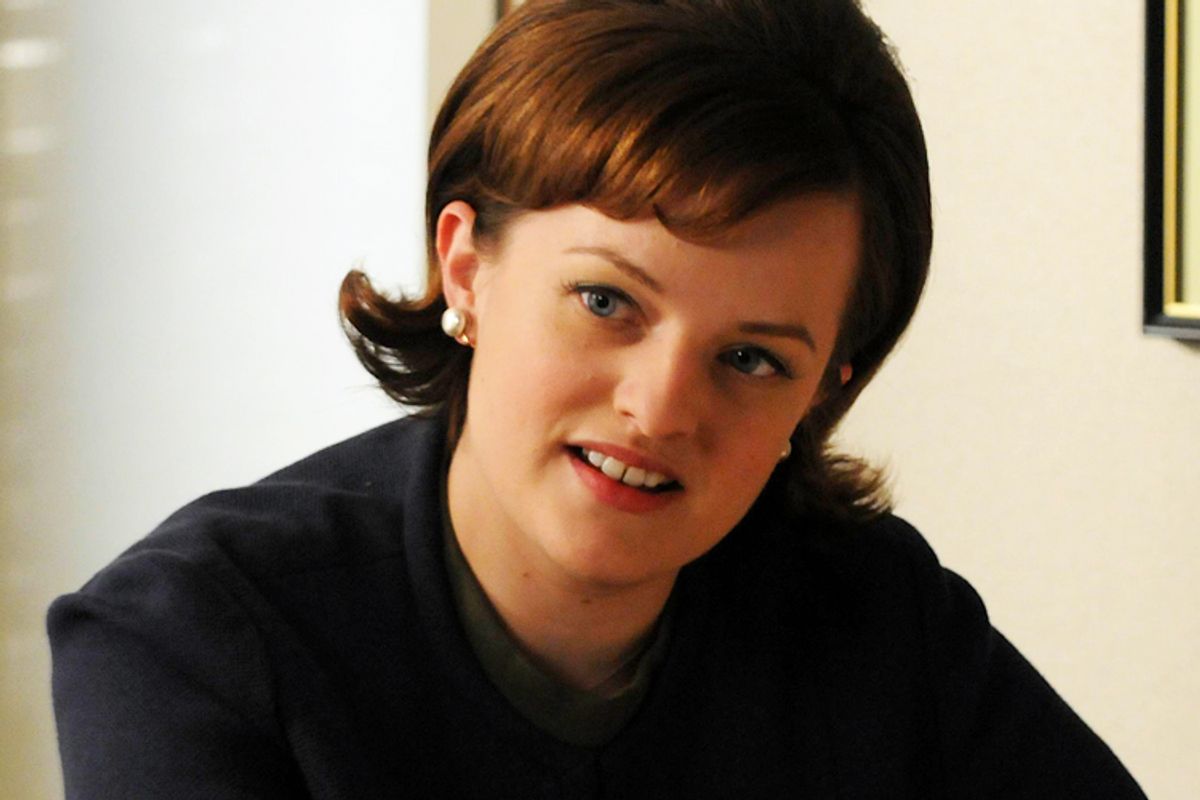 "Don't worry, you'll be married again in a year." That's what Faye Miller (Cara Buono), the smart female consultant on Sunday night's episode of "Mad Men," tells Don (Jon Hamm). Based on the look of shock on his face, he hasn't even considered this. But how long can he go on drinking himself into a stupor, just to numb the pain of returning home to an empty apartment?

"I'm sorry, I always forget. Nobody wants to think they're a type," Faye adds before disappearing. She isn't interested in flirting with Don precisely because she recognizes the state that Don's in, and sees that almost any woman will do. His desperation is best captured in his encounters with his neighbor Phoebe (Nora Zehetner): First he blows her off, thinking she's not quite special enough for him somehow, then he makes a drunken pass at her, imagining that of course she'll comply ("You're good at that," he tells her coyly as she slings off his tie. "My father was a drunk," she replies matter-of-factly before turning off the lights and leaving him in a pathetic heap on the bed). Finally, he goes by and knocks on her door and she's not home at all.

So Don resorts to making a blind, fumbling pass at his young secretary, Allison (Alexa Alemmani), who delivers his lost keys to his door after the office Christmas party. In one of the most uncomfortably obvious misunderstandings in "Mad Men" history (and let's face it, "Mad Men" has a devilishly ravenous appetite for such soul-crushing moments), Allison resists Don's fumbling attempts to kiss her at first, saying, "Don't." But when he persists, she starts to believe his perseverance means he's actually in love with her, instead of reflecting his true type: a heartless cad who can't stand to be alone. Finally, she gives in and kisses him not with the carefree manner of someone comfortable with the notion of sleeping around, but with the passion of someone who's pretty sure this means she's about to live happily ever after with her sexy boss man. Oh dear.

By the time she's giggling giddily post-coitus and saying "My goodness!" you can almost see those brutal masochists over in the "Mad Men" writer's room, drooling and clasping their hands together like Dr. Evil as they plan the devastating scene that we know is coming next: Don rips Allison's heart out with the condescending cruelty he's known for.

But then, "Christmas Comes but Once a Year" is all about the loss of innocence, from a naive romantic like Allison abruptly being fed to the wolves to that poor reformed drunk Freddy Rumsen (Joel Murray) being faced with his status as an old has-been. Freddy, at least, remains remarkably resistant to the truth on this front. No matter what Peggy (Elisabeth Moss) tells him, either about his terrible ad ideas or about his thoroughly anachronistic comments about sex and marriage, he refuses to hear what she's saying. But then, what can you expect from a colleague who addresses a grown woman as "ballerina"?

Roger Sterling (John Slattery), on the other hand, is having trouble living in his own happy bubble this season. Not only can't he convince Joan (Christina Hendricks) to revisit the past ("All I was saying is that this is the office and that's life. And this is good, and that's ... life," he tells her, hinting at his dissatisfaction in his new marriage), but he's forced to recognize that, even after achieving so much success, he's still utterly beholden to the humiliating shenanigans of narcissistic, needy clients like Lucky Strike heir Lee Garner Jr. (Darren Pettie).

"Put it on!" Garner growls menacingly at him, dead-set on getting what he wants. When Roger finally begrudgingly agrees, Garner turns to Don and says, "He's a hell of a sport." Not only is Garner accustomed to forcing everyone to play along with whatever game he's invented, but he's more than willing to suspend his own disbelief about how much everyone else is enjoying themselves.

But the loneliness of this way of living becomes evident when Garner briefly considers the distant past, before he became such a restless drunk. As he's opening his present, he says, in an almost childlike tone: "Reminds me of when I was a kid. Remember that, you'd ask for something and you'd get it? Made you happy?" Garner can't help longing for the simple pleasures of a gift that arrives without any strings attached at all.

But even the gift Sally (Kiernan Shipka) receives this episode seems likely to lead to a loss of innocence eventually. After running into Glen (played by Marten Holden Weiner, show creator Matthew Weiner's son), the sensitive, serious little boy who had a huge crush on Betty (January Jones) in the show's first season, Sally gets a call from him at home. He tells the housekeeper his name is "Stanley" because, as he explains, it's "private."

Glen: How come you didn't move?

Sally: I don't know. I hate it here. I really, really do.

Glen: Why? I won't tell anybody.

Sally: Every time I go around a corner, I keep thinking I'll see my dad.

Glen: Sorry. They're not going to get back together, you know. Especially now that she's doing it with somebody else.

Just as Betty has found the daddy figure she's always dreamed of, Sally may be setting off down the same road, elevating her absent father to the level of demigod while nursing a growing disdain for everything else in her life. And who should feed the flames of her contempt but Glen, who seems to have grown into an alienated, intense kid with a not-so-charming compulsion to kick up trouble. By messing with the Draper-Francis household but leaving Sally's room untouched except for his gift of the twine-cutter, Glen not only shows Sally that he's on her side, but he demonstrates an alternative to quietly tolerating the lives these careless adults dish up for them. If Daddy Don can't be Sally's knight in shining armor, maybe Glen can. Of course, anyone with that kind of focus can turn creepy on a dime. We can only guess that this will end badly, with Glen getting more aggressive until he eventually moves on to shock art or comparative literature or some other vice.

Speaking of ending badly, here comes the humiliation we've all been waiting for: Allison arrives at work all bright and early, a twinkle in her eye and a skip in her step. To see this former polished professional -- who always knows exactly what Don wants even before he does, who reads him letters from his kids and fetches their presents but always respects his personal boundaries -- transformed into a weak-kneed, giddy, swooning girl with her hopes sky-high (even after her co-worker loudly lamented the night before how "pathetic" Don had become)? It's almost too heartbreaking to bear. And of course, when Don breaks her heart, he has to inadvertently sock her in the face, kick her in the shins and grind her face into the carpet while he's at it. "Thank you for bringing my keys. I really appreciate it. I've probably taken advantage of your kindness on too many occasions," he tells her, refusing to address the matter outright but making her feel like even more of a whore in the doing. And then, to cap things off? He gives her an envelope full of cash. Why not just splash your tumbler of whiskey in her face while you're at it, Don?

We close with Peggy in bed, having finally given in to her boyfriend Mark (Blake Bashoff), maybe because she loves him, or maybe just because she doesn't want to be alone on New Year's Eve, as she told Freddy. "Do you feel different?" Mark asks, because he thinks she's a virgin -- and by the look on her face, she does, and she's not happy about it. Even this pretend loss of innocence adds up to a real disappointment. Instead of imagining that she can play along with a happy-go-lucky, look-at-my-sweet-future-husband ruse, Peggy realizes that she's just not made for old-fashioned games. But by giving in, she may not have changed Mark's feelings as she worried, but she has changed her own.

So how do you hold on to some spirit of innocence and naive happiness in your life? "Mad Men" demonstrates that unless you're very rich, or very drunk, or in denial -- or all of the above -- it's not that easy.