The media's real bias: Caring about itself too much

Who cares which news outlet is sitting where in the White House briefing room? 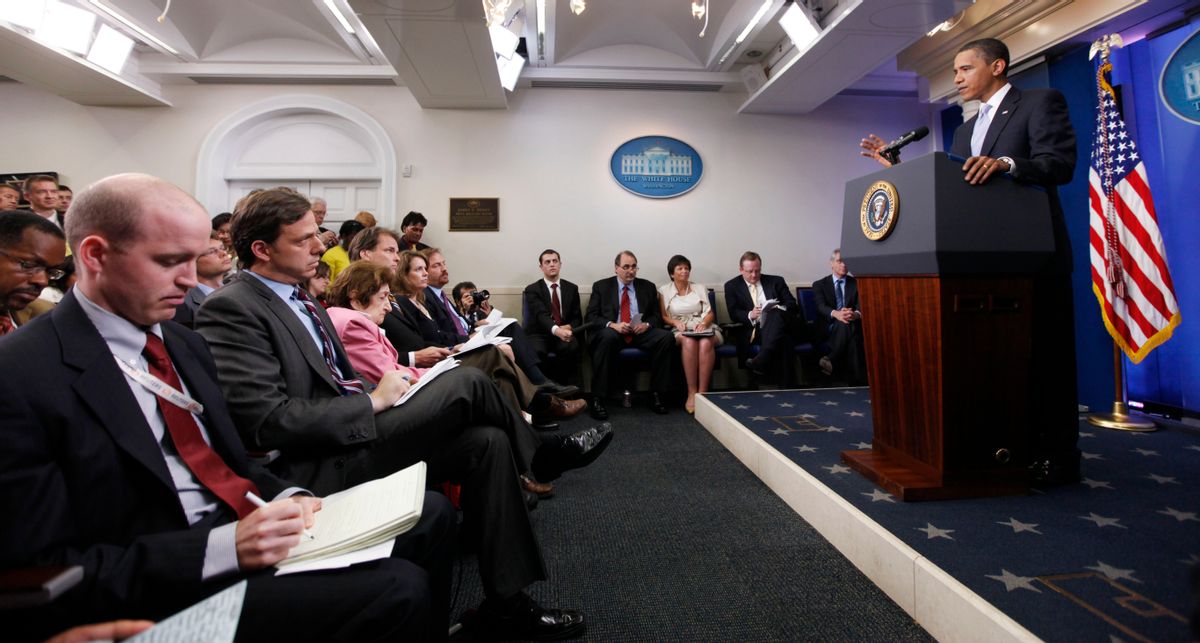 OK, here's the deal. White House correspondents aren't very important. It's not their fault; it's the nature of the position. What they basically do is let us know whatever it is that the White House wants us to know, and then poke around a bit and perhaps find out, oh, if they're good and lucky, 15 percent more than the White House wants us to know about what goes on there. Mostly, though, they're just passing things along. If the president has a trial balloon to send up, he can use the W.H. press corps to float it. During those times in which there's a lot of internal tension, the W.H. press corps often become conduits for backstabbing and selective leaks. That's what they do. I'm not against it! Part of the job of informing the public. It's just ... the White House press corps doesn't do investigative reporting, and can't follow the many underreported interesting stories out there -- they're stuck in the White House! I know, I know -- a lot of you think that the W.H. press corps is craven and spineless, or else you think that they're all so concerned about status that they go easy on the president, or else you think they're all secretly hopelessly biased in favor of whichever administration is in power. Really, that's not what's going on. It's just the nature of the beat.

So, if the White House press corps isn't especially important, you know what's infinitely less important? That's right -- who sits in which seat during the White House press briefing and press conferences. I really can't think of anything of less consequence. Really. If I was pressed, I'm sure I could compose an item on Chelsea Clinton's wedding, or on the president's outing with his daughter to a WNBA game, and find some real politics in either of them. But who sits where in the White House briefing room? Gotta be the bottom of the barrel, absolutely without any actual "Politics and Government" content whatsoever, no matter how broadly defined. So please explain to me why the "Politics and Government Blog" of the New York Times posted a long item about it last night? When there's, you know, real news out there that's not being reported?

Actually, check that; I'll explain it. Among the many real biases of the press (as opposed to the ideological and partisan fantasies of both sides) is a bias in favor of overestimating the importance of press coverage. Not that the press is unimportant, of course ... but it isn't as important as one would think from reading the newspapers and watching the news on TV.

By June 1971, the Tet offensive and Walter Cronkite’s famous on-air editorial were more than three years in the past. The David Halberstam article that inspired “The Best and the Brightest” had already appeared in Harper’s. Lt. William Calley had been found guilty in the My Lai massacre exposed by Seymour Hersh in 1969. Just weeks before the Pentagon Papers surfaced, the Vietnam veteran John Kerry electrified the country by asking a Senate committee, “How do you ask a man to be the last man to die for a mistake?” Most Americans had long been telling pollsters the war was a mistake. By the time the Pentagon Papers surfaced, a plurality also disapproved of how Vietnam was handled by Nixon, who had arrived in office promising to end the war.

Cronkite ... Halberstam ... Hersh ... great reporters all, but they aren't the main story; the story was that the war was actually going badly, and the story was that as a result, first the left and then the mainstream foreign policy establishment had turned against the war.

Of course, this is understandable. Rich says that he was inspired by Vietnam to become a journalist. Presumably, those who were inspired by Vietnam to enter into careers in government or political activism interpreted those events differently, with different sets of heroes. But then again the people who wind up writing the newspaper stories and columns tend to be the ones who saw Cronkite, Halberstam and Hersh as the central players of the Vietnam story.

All of which isn't going to change, I don't suppose. Just consider it a warning of a real, clear press bias, one to keep in mind when you're reading the stories that reporters tell.