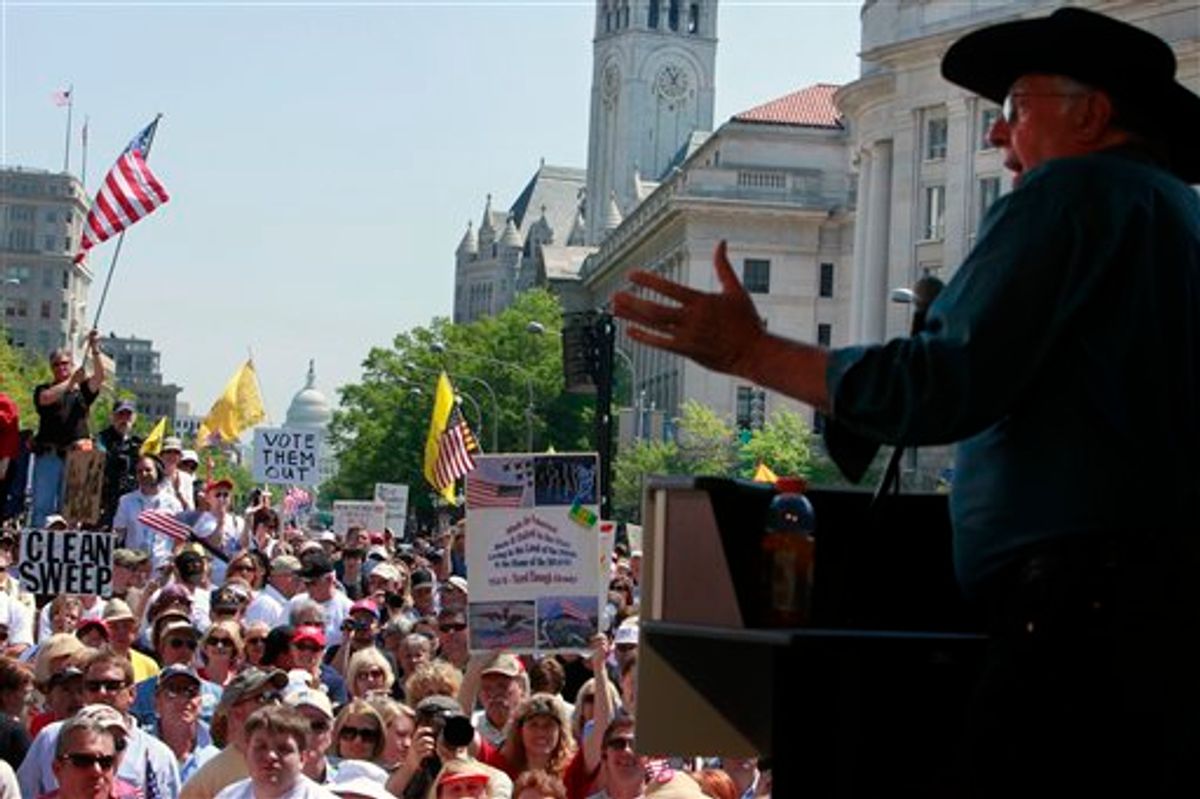 That race has featured prominently in the right’s campaign to derail the Obama presidency is indisputable.

Rush Limbaugh has warned that "Obama’s entire economic program is reparations" and that "in Obama’s America, the white kids now get beat up with the black kids cheering." Glenn Beck has notoriously claimed that the president has a "deep-seated hatred for white people or the white culture." And unconcealed bigotry has popped up at Tea Party events with alarming regularity.

Also indisputable is the gaping racial divide that has emerged when it comes to the public’s views of Obama. In his New York Times column this weekend, Charles Blow highlighted data from a recent Quinnipiac University poll that found 91 percent of blacks approve of Obama’s handling of the presidency, compared with just 37 percent of whites -- and that 87 percent of blacks would vote to reelect him in 2012, compared to a mere 28 percent of whites.

It’s tempting to connect poll results like this to the right’s race-based messaging and to wonder if America was really as ready for a black president as we liked to think it was back in 2008. So it’s probably worth remembering that a nearly identical divide also existed when the White House was occupied by a white Southerner who some called "Bubba."

When Bill Clinton came to office in 1993, he faced the same wall of reflexive Republican opposition that has bedeviled Obama. The GOP filibustered his stimulus plan to death, provided no help when he attacked the deficit (because his budget included tax hikes for the wealthy), and accused him of trying to engineer a government takeover of one-sixth of the economy with his healthcare reform plan. Sound at all familiar? Republicans also took every chance they could find to drive a wedge between Obama and working-class white voters -- gays in the military, Lani Guinier, a crime bill that included funding for inner-city midnight basketball programs, and so on.

It all produced, at this same point in Clinton’s presidency, a stark racial divide. In the 1994 midterm elections, when Republicans won control of the House and Senate, white voters favored the GOP by a 62 to 38 percent margin. Today, the spread is 50 to 31 percent, according to Quinnipiac’s most recent generic ballot test. Heading into the '94 midterms, Clinton’s approval rating with white male voters was around 20 percent -- and it measured in single digits in some deep South states. Hence, '94’s designation as the year of the Angry White Male.

Viewed in this context, the same basic ingredients that turned so many white voters against Clinton are at work with Obama. Remember that the first two years of Clinton’s presidency were the last time before now that a Democratic president enjoyed robust Democratic majorities in both congressional chambers. That concentration of power, combined with a still-shaky economy and Clinton’s advocacy of (some) culturally and economically progressive legislation, gave the right an opening to sow fear among whites of redistribution. Race was, obviously, a part of this (as the Guinier and midnight basketball examples showed), but the campaign was just as successful in 1994 with a white president as it has been in 2010 with a black president.

In a way, the Clinton example is a hopeful one for Obama, mainly because he rebounded after the '94 drubbing and easily won reelection in 1996. In that contest, he claimed 44 percent of the white vote (Bob Dole got 45 percent) and finished only 11 points behind Dole among white males (a 49 to 38 percent spread). By '96 voters were feeling better about the economy and the direction of the country than they had been in '94, which helps explain Clinton’s comeback. So if the same pattern holds in '12, it’s reasonable to assume that Obama’s standing with white voters will also improve and return to the levels he enjoyed in '08.

But it’s also a cautionary tale, given how radically Clinton transformed his governance as a result of '94. Aware of the damage they’d inflicted on him, he became eager to make substantive and symbolic gestures to redistribution-wary white voters. This was the Clinton who signed a welfare reform bill that his party’s base loathed, and who quietly ran ads on Christian radio stations boasting of his support for the Defense of Marriage Act. Granted, he was grappling with a Republican Congress, so compromise was necessary and sweeping progressive initiatives weren’t realistic, but the Clinton of '96 was a fundamentally different president than the Clinton of '94.

It’s possible that Clinton overcompensated -- that, thanks to the economy, he would have won back all of the white voters who deserted him and beaten Bob Dole just as handily without all of this. We’ll never know for sure. But Obama may soon face the same basic choice: to pare back the ambition of his presidency and pander, or to press ahead