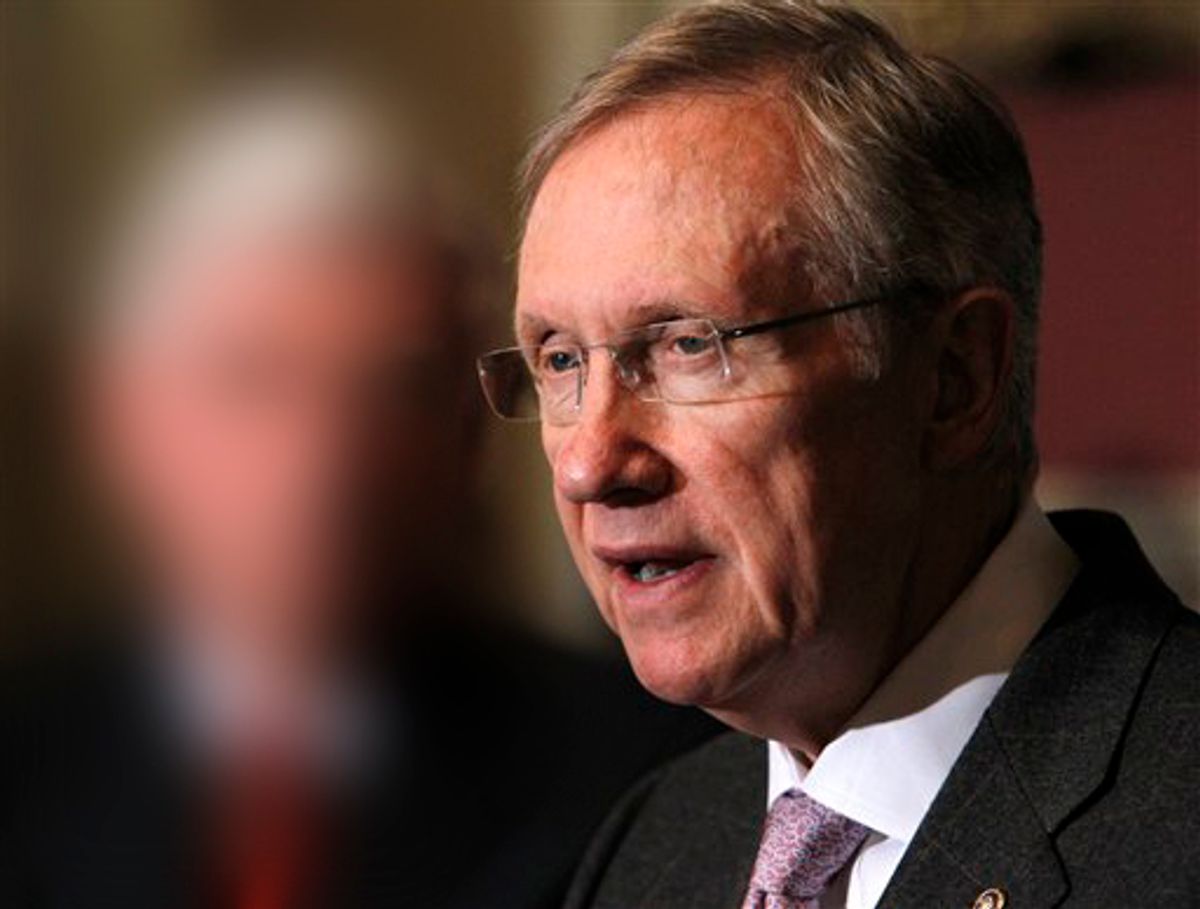 FILE - In this April 28, 2010 file photo Senate Majority Leader Harry Reid of Nev., right, accompanied by Senate Banking Committee Chairman Sen. Christopher Dodd, D-Conn., speaks on Capitol Hill in Washington. Senate Democrat leaders will work this week to secure the last votes needed to pass legislation imposing the most sweeping new rules on banks and Wall Street since the Great Depression. It needs 60 votes in the Senate. Reid delayed a final Senate vote until after the July 4th holiday because of the death of Sen. Robert Byrd, D-W.Va., and hesitation from three Republicans who had previously supported the legislation. (AP Photo/Charles Dharapak, File) (Charles Dharapak)
--

A fun and easy way to slightly mitigate the worst aspects of this miserable economic climate would be for the federal government, which can deficit-spend, to provide aid to state governments, which for the most part cannot. Now, I know that state governments are all bad and evil and deserve to have their budgets slashed as punishment for their profiligate ways and as penance for the crime of not somehow having stopped the recession from happening. But on the other hand, states will have to fire employees that citizens like, like teachers, if the states don't have any money, which most of them do not. (And also states need money for Medicaid, so that our vast underclass is not literally dying in the streets.)

But Republicans in Congress refuse to vote for anything that costs money and isn't offset, with the exception of wars, the extension of tax cuts, and unwanted jet engines. So Harry Reid had to put together a state aid bill that was also paid for. He thought he did this, with a bill that was paid for in part by things like cutting food stamps, which is a horrible idea. But it turns out that he did not cut enough from the food stamps program to pay for his state aid bill, because somehow, once the Congressional Budget Office scored the aid bill, the offsets came up almost $5 billion short. What? Nice one, guys.

Now the bill can't be voted on until it's fixed, and what with how Republicans are delaying every single little thing just because they can, it could be days before it's actually voted on, if it's ever actually voted on. And then, once/if it passes, nothing will happen, because, as David Dayen points out, the House is out of session until September.

So we can't rely on any of our institutions and the country is basically screwed, going forward. I mean, except for the parts of the country that are comfortably employed and/or independently wealthy. They're fine.