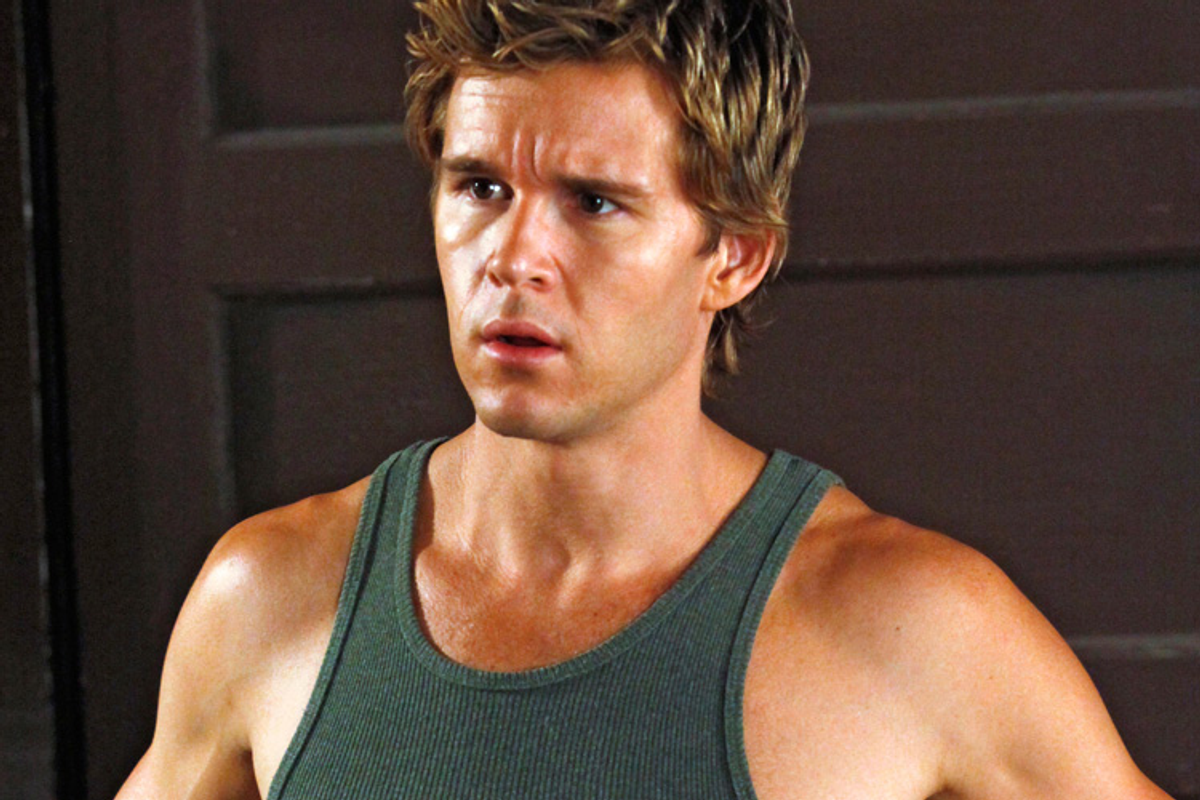 This was not the glamorous state wedding I was hoping for. No Alcide in white fur, no rib cage hats, no celebrities of note, not even Mary Steenburgen and Ted Danson. Still, I can't think of a better wedding singer than Miss Polly Jean Harvey to celebrate the union of Russell and Sophie Anne with the song that gives this episode both its title and its theme, "Hitting The Ground."

Almost everyone this week has hit bottom. For some, it looks like the ground is where they're going to stay (Lorena, the magister, Cooter). For others it's just a place they've hit before, and bounced back finer than ever (Pam!).

Before I recap, however, an apology. I'm vacationing near Kennebunkport, which I suspect may be the capital of the vampire kingdom of Maine. As anyone who's ever read "Salem's Lot" knows, Maine vampires are hardcore. Given what they've probably learned from observing a certain first family, I expect them to be hovering any minute outside my window in military helicopters. So I'm trying to keep this short.

Which I will do mostly by ignoring some storylines, like Hoyt's new girlfriend and her "biscuits," Jason and his search for Crystal, and the dog fighting, except to note how hot Sam looks in a dog leash and to share my favorite line of the night delivered to Joe Lee: "You're just a scared man in saggy underwear, with no discernable life skills." Maybe with all the vampires in hyperdrive this season anyone who isn't a vampire might as well be wearing saggy underwear. Maybe Bon Temps is just in a rut. But it needs a new mythological creature, bad.

Maybe someone from that crazy luminescent party Sookie visits during her coma, the party that looks like if Guillermo del Toro directed an ad for Tampax. But first, let's retrace the steps of how Sookie got there.

I didn't think it was possible to rock the sad serial killer clown look, but just as I was starting to design my Team Lorena T-shirt, that damn Sookie turns Lorena into a giant blob of gelatinous blood. Maybe next time Sookie stakes a vampire, her new pals from the super sexed up tampon ad party can help clean it up. But for now she's stuck with Tara and Alcide who do their best to help her wrap Bill up in a sheet to bring him somewhere safe.

Except here's Debbie wearing her not-a-band-aid bikini top, thanking them for the "vampire burrito." Ha! Debbie. Why do I think that's the only good line they're ever going to give you? Sure enough, conversation quickly degenerates into, "are you calling me a bitch, bitch?" Do you remember a couple of episodes back when Franklin worried about overusing the word bitch? I miss Franklin.

Debbie has a gun. Sookie distracts her, so now Alcide has the gun. Cooter arrives. Alcide shoots Cooter. Debbie cries, but that's mascara running down her face, not blood. She threatens to hunt Alcide until she kills him back, but she's not Lorena. Her raging were-rant falls flat, and just makes me sad for her. Later Jason will have his one good line of the show: "I never thought I was smart enough to get depressed." Oh, so that's what I'm feeling, smart.

Again. Everyone seems so lame next to the vampires. So when Bill loses control and starts to devour Sookie in the back of Alcide's truck, and Tara moves to save her, I'm thinking, "Oh please don't." But then Tara throws Bill out into the sun, leaving him on the road where he's supposed to crisp up like a vampire marshmallow. Except he doesn't, which means something about Sookie's blood is like magic internal sunblock! Mystery!

And Eric! I feel better. He has a plan: Suck the humanity out of Sophie Anne's favorite companion, Hadley, while Sophie-Anne watches from an oversized birdcage. The goal is to force Sophie-Anne to explain Sookie's importance. But Sophie-Anne won't budge (no pun on budgie. Okay, maybe half a pun.) Whether it's the drive to survive, or Eric's hand on her boob, Hadley whispers the secret into Eric's ear. "I never would have suspected that," lisps Eric, his mouth still dripping with blood which makes it look and sound like his front teeth are missing.

Why can't everyone be loyal like Pam? Back in the dungeon, the magister finds all kinds of awful ways to torture her with silver. But none of them break her. Still it's a relief to see Eric show up to save her, teeth brushed.

According to Vampire politico-theology, it doesn't matter that Eric doesn't have Bill because he has Sophie Anne who is walking down the dungeon stairwell. But according to the magister, this means that Eric has committed treason. Except that it can't be treason because Eric is now loyal to Russell. Now it's Russell's turn to walk down the stairwell. Oh, vampires! You have such presence. You make walking down crappy basement stairs look like some kind of vampire U.S.A. pageant.

Russell and the magister have a blow out about The Authority, and who is The Authority and where The Authority got its authority (I'm guessing Maine). Then Russell starts having a big power tantrum which ends with him declaring himself the "new fucking authority." And then he gives a big speech about how he has to take back the authority to save nature from the humans who have squandered it (nature, not the authority, which I'm sure we've never had).

At the hospital, it's discovered that Sookie doesn't have a blood type, so she can't receive a transfusion. Sookie has the aforementioned vision, where the super sexy women in diaphanous gowns frolic with their equivalent in man candy. In the vision, Sookie meets Claudine who tries to talk her into diving into a giant green pool where she will be happy forever. Claudine warns her not to give Bill her light. Bill arrives, in real life, to save her by transfusing her with his blood.

Back in the dungeon. Under threat of torture, the magister marries Russell and Sophie Anne. Oh how Pam laughs at the magister's weakness. (Pam for new magister!) "I'm so happy I could cry blood," remarks Sophie Anne acidly.

Cut to Sookie who wakes up, takes one look at Bill, and starts screaming bloody murder.

Cut back to Russell who pauses just before leaving the dungeon to slice off the magister's head, because however much he wants to be Al Gore, he's way more Henry VIII. Which reminds me (because he's played by James Frain of "The Tudors") where's Franklin? He didn't turn into a giant pile of gelatinous blood, which means he's got to be around somewhere. Probably back at the palace bonding with Talbot, whom I notice was not invited to the wedding.