Why blaming Bush is a dead end for Democrats

Voters get that the former president is mainly responsible for the current mess. But it won't help Democrats now 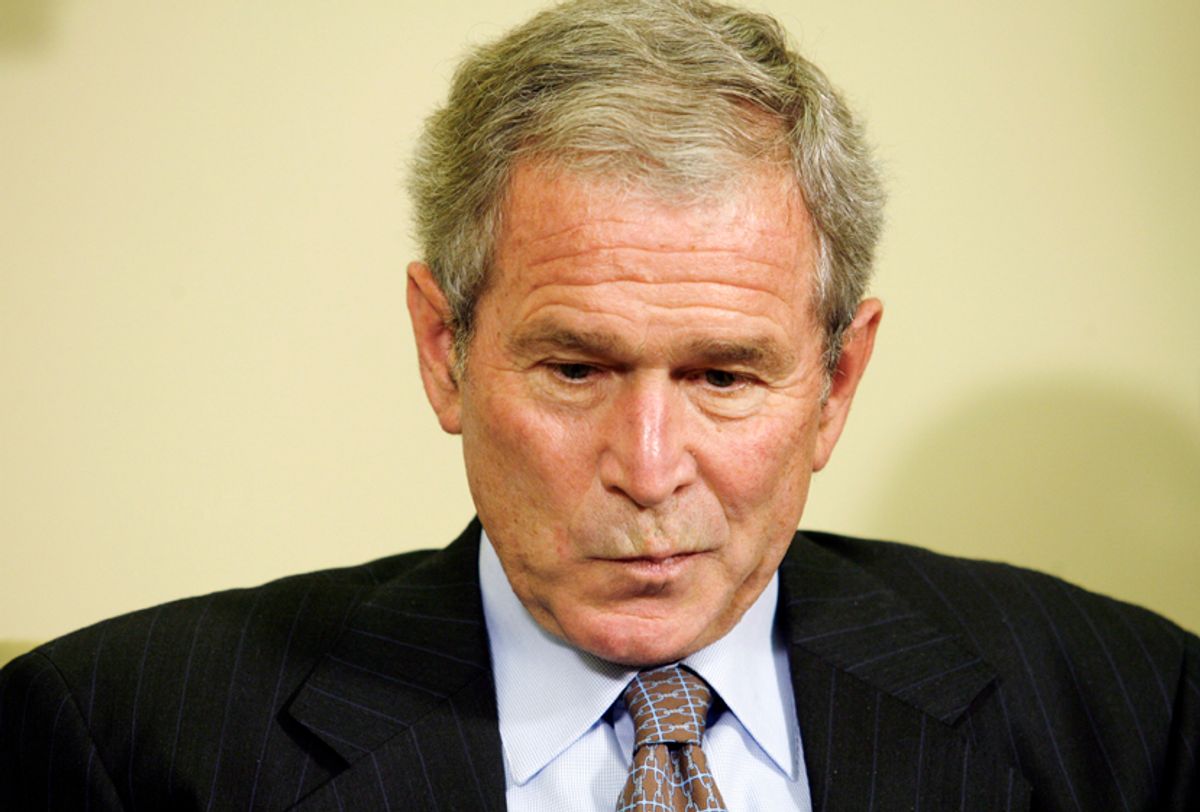 At an Atlanta fundraiser last night, President Obama said that the Republicans who want to take back Congress "don't have a single idea that's different from George W. Bush's ideas. Not one. Instead, they're betting on amnesia."

That's certainly true. But the president, not surprisingly, left out one extra bit of information: Betting on amnesia is a pretty good bet for the GOP, at least for this year.

Mostly, that's just the nature of midterm elections, which are driven by the buyer's remorse of swing voters. The only question is how deep that remorse will be, and -- as I've noted before -- it was always going to be severe this year, given the horrible economy, the high expectations that greeted Obama's presidency, and the Democrats' control of the executive and legislative branches. In this environment, the GOP functions primarily as a protest vehicle and efforts by the in-power party to re-frame the campaign as a choice between two governing philosophies fall on deaf ears.

But that isn't stopping Democrats from trying. Obama's Atlanta speech wasn't the first time he's reminded audiences of the mess he inherited, and it certainly won't be the last. And Democrats, as Greg Sargent reported yesterday, are now circulating a memo that suggests voters can be yet be persuaded "that voting Republican would be a return to Bush policies."

Sorry, but I wouldn't be too optimistic about this -- and Democrats with long memories should know why. There's a (relatively) recent midterm election in which this exact strategy was employed -- amid eerily similar economic conditions. And it failed. The only difference is that it was a Republican president pleading with the public not to go back to the dark days of his predecessor's administration and Democratic candidates benefiting from the public's refusal to listen.

This was the story of the 1982 midterms, when Ronald Reagan and the Republicans -- faced with surging joblessness that broke into double-digits a month before the election --  invoked the ghost of Jimmy Carter over and over again. Carter had been driven out of office by Reagan in a 44-state landslide in 1980. The economy was stalled in '80, inflation was astronomical, national confidence was low, and Carter's approval ratings were on par  with Bush's 2007 and 2008 numbers. Reagan and the GOP sought aggresively to remind voters of all of this and to argue -- as Obama and the Democrats are now -- that they had put the country back on the right track and the good news would soon be coming.

"Our critics are saying our economy is on its knees," Reagan said at an '82 campaign rally. "Well, you know something, if the economy is back on its knees, that's quite an improvement because two years ago it was flat on its back."

The GOP spent lavishly on TV ads linking Democratic candidates to Carter and to the "malaise" of the late '70s. In unveiling one series of commercials, Guy Vander Jagt, the House GOP's campaign chief, noted that, "economic problems did not appear out of thin air in January of 1981."

None of this worked, of course. With unemployment galloping out control (it was nearly three points higher on Election Day '82 than it had been in '80), voters -- who had initially been smitten with the new president -- turned on Reagan and his party and the GOP suffered a crushing blow in the midterms. By the end of '82, even Republicans were calling on Reagan not to seek reelection in '84.

The "blame Bush" strategy won't work any better. The '82 electorate hadn't suddenly changed its mind about Carter. Polls showed that a plurality of all voters -- and a majority of independents -- blamed Carter and the Democrats for the country's economic problems (just as they now blame Bush, instead of Obama). But it didn't matter. The electorate perpetually exists in the present tense, without collective memory or foresight. Democrats benefited from this reality in 1982 (and 2006, for that matter), and they'll be hurt by it in 2010 -- no matter how many times they bring up George W. Bush's name.