Just get us there, already! 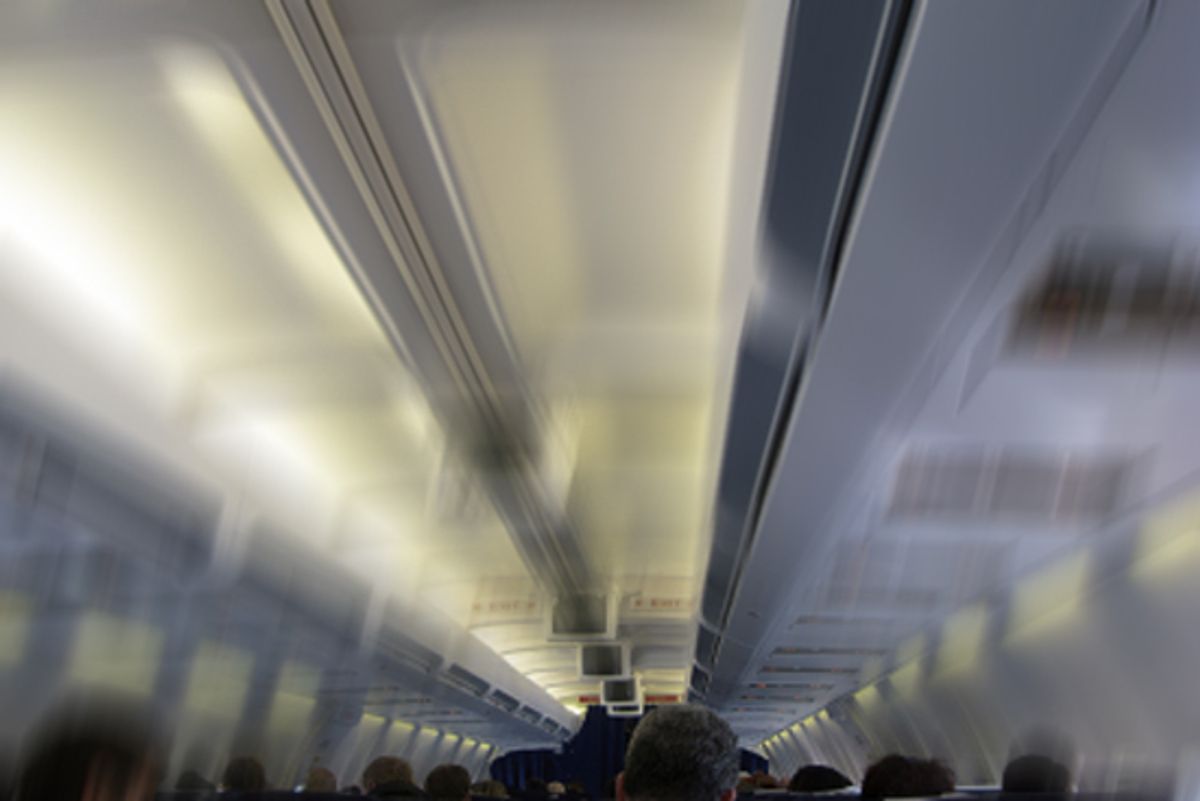 What was that I said? Something about how much I love commercial flying?

I'm a delusional romantic at times.

In my defense, however, these days I'm assigned almost exclusively to international routes. International flying is more civilized than the domestic slog: The planes are bigger and the meals are served on china. The passengers are better behaved and more refined. The airports are cleaner and quieter, the hotels more luxurious. The multi-day layovers are like miniature vacations. I like it immensely.

But then, three or four times each month, in order to make my commuter flight home, I must slip from that world into this one. I don't want to say what airline this was. I'm just happy it wasn't mine.

To start with, the plane leaves 90 minutes late. An hour-and-a-half delay for a 40-minute flight. The gate agent, who is working about 10 departures simultaneously, keeps us abreast through a rambling series of public address announcements. She talks in high-pitched staccato bursts that are all but unintelligible. Something about a missing crew member. Or is it a mechanical problem? It's hard to tell because three different P.A. announcements, including hers, are going at once. Her voice is like the plaintive call of a sparrow disappearing into a hurricane.

I say sparrow because there are two of them right next to me, drinking out of the terminal's only functioning water fountain. A young girl lets out a piercing shriek: "MOMMY! THERE'S BIRDS IN HERE!"

Somewhere in the background CNN Airport Network is talking about the safety of backyard trampolines. There's trash on the floor.

Welcome to the American airport!

Sixty minutes into our 90-minute delay, there's a gate change.

Over at the new gate, the too-small boarding lounge is beyond full. Every seat is taken. The spillover crowd is leaning against the walls and sitting cross-legged on the floor. The rest of us are standing, backed into the corridor and so tightly packed that nobody can get by. People are pushing and shoving and tripping over their luggage. Pizza crust, napkins and plastic cups are scattered across the carpet. A woman is on her knees between the rows of chairs, changing her daughter's diaper. A stream of indecipherable announcements rings out, and everybody looks at each other. "What flight was that? Where? Is it boarding?"

Maybe in Kinshasa or Karachi would you see this kind of scene. In a bus station.

Over near the podium is an agitated guy dressed in black. You can't help noticing him. He's about 40, balding with the rest of hair closely shaved, wearing thick-rimmed glasses and expensive shoes. He's too polished to be a hipster, but there's something edgy about him. He could almost be a celebrity. A celebrity you don't like. He's got an aura. It's a pulsing, red, fiery aura of anger and self- importance. The plane is late, and he is obviously annoyed. He's sitting, then standing, then sitting, then standing. Now he's pacing, brow furrowed, throwing his arms around, talking sotto voce into his cellphone. He has the phone, a MacBook and a BlackBerry all going at once.

The aircraft is a 50-seater, operated by who-knows-what Express- Connection-Eagle-Link. The cabin is dirty and hot. My seat pocket is stuffed with the last occupant's boarding pass and a wad of used napkins.

It's a full house, and it should go without saying that among the passengers is a crying child. A yelling child is more like it. The only thing worse than a crying child is the one who erupts in crackling, intermittent, high-decibel yelps every 20 seconds or so. It's like a firecracker going off. You never know exactly when it's coming, and it cuts at your nerves like a hacksaw.

Turns out that the angry dude with the glasses is also on the plane. He's in front of me, diagonally across the aisle. We're almost ready to taxi and the flight attendant tells him twice to put away his computer. He ignores her both times -- "Yeah, yeah, in a minute" -- and as she walks away he turns to the person next to him and snarls, "How about she just closes the friggin' door and let's go already."

The captain makes an announcement. He apologizes for the delay, but the rest of it is a high-speed ramble of mumbo-jumbo that nobody can make any sense of. "We had to change planes," he explains, "because the first one had a mechanical."

"Had a mechanical"? That's airline talk for a maintenance problem. Something was inoperative and couldn't be fixed or deferred in time, so they swapped aircraft.

Angry Dude wants to hear none of it. He holds out his hands, thumb-to-thumb like he is trying to strangle somebody, and says aloud, in a voice clearly audible to anybody within four rows, "Shut the fuck up! Just shut the fuck up and get us there, asshole!"

The captain's announcement may have been lazy and grammatically ridiculous, but he made the effort to apologize, and he was trying. As I see it, Angry Dude has now crossed a line. He has gone from a curious nuisance to belligerent and confrontational, and is one small step from being thrown off the plane.

So it should be, but unfortunately the flight attendant, whom we'll call Lulu, is far enough away that she doesn't hear him, and the people nearby, understandably, pretend not to be listening.

Or perhaps Lulu just doesn't care? She makes one last sweep of the cabin, then plops down into her jump seat and flips open a copy of Cosmopolitan. She sits there, snapping gum and thumbing through Cosmo, in full view of everybody on the plane, for the entire duration of the 20-minute taxi. She hardly looks up. She does not notice that the man across the aisle does not have his seat belt on. Neither does she notice that several others, including the woman next to me, have their window shades down for takeoff.

The shades-up rule, standard during takeoffs and landings, confounds many fliers, but the reasoning is simple: It makes it easier for the flight attendants to assess any exterior hazards -- fire, debris -- that might interfere with an emergency evacuation. It also helps you remain oriented if there's a sudden impact, rolling or tumbling, allowing you to keep track of which way is up, and which way is out. (Dimming the lights is part of the same strategy. Burning brightly, the glare would make it impossible to see outside. And by pre-adjusting your eyes, you're not suddenly blind while dashing for the doors in darkness or smoke. The emergency path-lighting and signs also will be more visible.)

Just as the engines begin to rev, I ask the woman next to me, who is young and pretty, if she'd mind raising her shade. I do this as politely as possible, yet the look she gives me is one that I can only begin to describe. It's a mix of indignation and disgust. You'd think that I'd asked her if she'd mind stepping into the aisle for a pelvic exam.

She hoists up the shade and goes back to her David Mitchell novel.

Not that you can see outside, really, even with the shade raised. The windows in the regional jet are almost at knee-level. This is for practical reasons, I know -- the windows are inserted along the flattest part of the curved fuselage to better cope with the stresses of pressurization, and floor height depends on structural concerns and the need for luggage space -- but it's easy to imagine the engineers did it just to spite me.

Next, it's barely 10 seconds after liftoff, the landing gear is not yet in the wells, and Angry Dude again has his computer out. Lulu is busy with "Fifteen Saucy Sex Secrets of the Stars" and doesn't notice the 15-inch screen bouncing and jostling as we climb through gusty winds.

The restrictions on laptops, by the way, aren't solely about electronic interference. In theory, a poorly shielded notebook computer can emit harmful energy, but the main reason laptops need to be put away for takeoff and landing is to prevent them from interfering with an evacuation or becoming high-speed projectiles. Your computer is a piece of luggage, and luggage needs to be stowed so it doesn't kill somebody or get in the way.

It's turbulent during the climb, and with a potent enough jolt, somebody -- if there's any justice it'll be Angry Dude himself -- is about to get 6 pounds of MacBook in the face or off the head.

Angry Dude continues to fuss and fume for the duration of the flight, swearing under his breath and pecking at his keyboard. He provides a strange form of therapy, I realize. Everybody on the plane, myself included, is tired and frustrated. But it's oddly calming to sit there watching somebody else seethe and sputter like a buffoon. It's as though he's somehow channeling our wildest anger fantasies.

And in a way, Angry Dude is a symbol of everything that is wrong with commercial flying. He is a caricature of the traveling public's contempt for airlines -- the frustration people feel in the face of delays, sloppy service and our crumbling aviation infrastructure. But he's also emblematic of this same traveling public's sense of entitlement. Ticket prices have fallen steadily over the past 30 years, while the number of flights, and the cities they connect, have skyrocketed. People have come to demand and expect dirt-cheap fares and the convenience of planes going everywhere, all the time (in near-perfect safety to boot). This is to a large degree unsustainable, but they demand it anyway. And whenever the system lurches or burps, they scream.

Poor Lulu, overworked and underpaid for the sake of that $59 ticket, seems to have thrown in the towel.

When you strip away the profanity and hostile gestures, Angry Dude expresses what everybody on the plane is thinking and feeling: Just get us there, already. But whether that makes him more of a jerk, or less of one, depends how you see it.