Obama should apologize to Snooki!

He denied knowing the Jersey princess. Now she's acting out, and the right sees proof he scorns the "little guy" 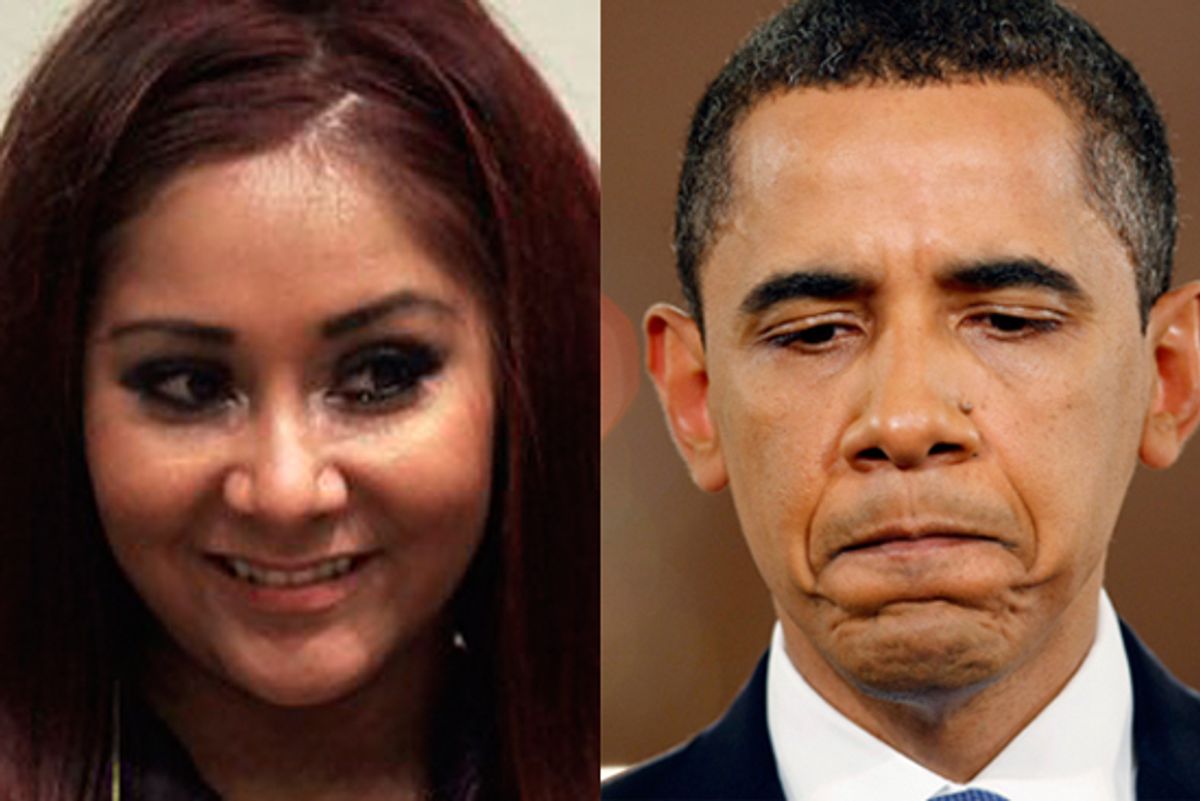 Sometimes I take right-wing Obama critics a little bit too seriously. But today they gave me a laugh: In his latest "Obamateurism of the day" (Get it? The president is an "amateur." Yeah, it's only clever if you pronounce "Obama" like "Alabama," but play along), Ed Morrissey announces: "Obama says he doesn't know who Snooki is, but three months ago he did!" Here's the scandal: Asked by "The View's" Joy Behar whether Snooki of MTV's "Jersey Shore" should run for mayor of Wasilla, Alaska (where a recent mayor is now as famous as Snooki, and shares her fondness for tanning beds), the president told the ladies of "The View" last week he couldn't answer, because "I don't know who Snooki is!"

Now, our Alex Pareene caught the president in the lie on Thursday – it turns out that at the White House Correspondents' Dinner, the president promised to exempt four people from the tanning-bed tax: "Snooki, J-WOWW, the Situation and House Minority Leader John Boehner."

But either way, Obama's tanning tax joke clearly wasn't funny, because in the premiere of "Jersey Shore" last week, we saw a sad, sad Snooki getting a spray-on tan, now that she can't afford to go to a tanning bed. "I don’t go tanning anymore because Obama put a 10 percent tax on tanning. [Sen. John] McCain would never put a 10 percent tax on tanning. Because he’s pale and would probably want to be tan," she explained. "Obama doesn’t have that problem. Obviously," she said. Obviously.

That's not all: This week Snooki went out and got herself arrested for disorderly conduct in Seaside Heights, N.J., wearing a T-shirt reading "Slut." It happened only a day after Obama said he didn't know Snooki, and I see a connection. Snooki is now acting out, feeling disrespected by the president after suffering discrimination by him as well.

Maybe it's time for Obama to declare that the Seaside Heights cops acted "stupidly," as he did when Cambridge, Mass., cops arrested Henry Louis Gates last year. Then they could have a Lemon Drop Summit with Joe Biden and the Situation. Or he could give another race and reconciliation speech, like the president's memorable address in Philadelphia two years ago. Obama could declare: "I can no more disown Snooki than I could my white grandmother, who also liked to tan from time to time."

Yes, the whole thing is silly, but it shows the depths to which the right will go to trash Obama. On Fox News, Glenn Beck's substitute Doc Thompson first declared the tanning tax racist last March, and Gateway Pundit did so last month (the comments are particularly enlightened). Last Thursday, the folks at Fox Business took a shot: Discussing Snooki's complaints, host David Asman called the tanning tax a "white people's tax ... this is a tax by racial classification." And guest Pam Zeller said it displayed Obama's "contempt for the little guy." (Snooki's not exactly a "little guy"; she's reportedly now earning $15,000 per Jersey Shore episode.)

Now the truth about Obama's dis of Snooki is roiling the right again. Funny, or pathetic? Or both! You decide.