A Kansas race centers on which candidate hates abortion more, and Missourians may "repeal" Obamacare today 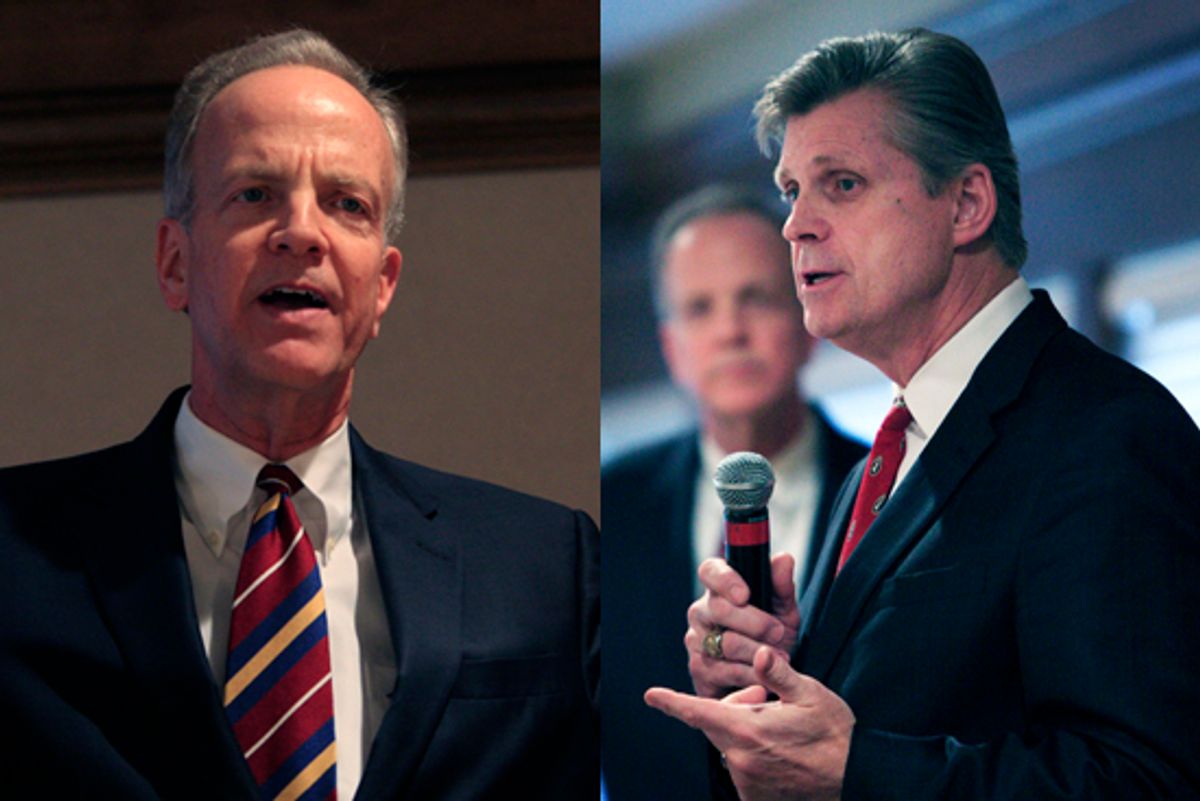 Primary voters in Kansas, Missouri, and Michigan are going to the polls today. There's a race to replace Michigan Governor Jennifer Granholm, Roy Blunt is looking to beat a tea party conservative to win a Senate nomination, and there are a number of interesting House races. But the two most important questions voters will definitively answer today? Just how much do Republicans hate abortion, and healthcare reform?

There is a statewide referendum in Missouri to block implementation of the individual mandate. Polling has been "sparse," Fox News says, but it will probably pass. (Both GOP candidates for Senate are, obviously, in favor of it.) Then, finally, Missourians will be free from tyranny. Until the referendum calling Obamacare unconstitutional is ruled unconstitutional.

And, covering the Kansas Senate race, Kathryn Jean Lopez digs in to figure out whether supposed pro-life Republican Jerry Moran really loves babies, or if he secretly only kind of loves babies, as a former aide has come forward to claim.

I mean, Moran may be "pro-life," but he is not as loud about it as his GOP primary opponent, Todd Tiahrt:

The argument that Tiahrt supporters make is that while both congressmen have pro-life voting records, there is no question that Todd and Vicki Tiahrt are devoted pro-life activists, mainstays at pro-life events (Mrs. Tiahrt has served on an education board of Kansans for Life). The same cannot be easily said of Moran, and Moore’s accusations do raise questions about what kind of leader he would be on such issues in the Senate.

Ye gods, is Jerry Moran... a moderate? Sure, he'll reliably vote to strip a woman of her right to control her own body, but will he also grandstand and demagogue on the issue? The voters have a right to know!

Moran found a hilarious way to refute "the moderate accusation," though:

The moderate accusation was further answered by the Moran campaign in the form of a Spanish-language PDF from Tiahrt’s 2002 campaign, which touts Tiahrt’s support for drivers’ licenses for illegal immigrants. A Tiahrt aide claims the mailer was in parts “inaccurate,” done by over-eager volunteers at the time and notes that Tiahrt has Tom Tancredo’s endorsement (Tancredo actually switched his endorsement to Tiahrt earlier this month, citing Moran’s voting record).

A Spanish PDF! Moran may not love babies, but his opponent apparently loves illegals. Is Todd Tiahrt secretly an anchor baby? Where's the birth certificate, Todd? Lindsey Graham says go back to Mexico!

(K-Lo concludes by endorsing Tiahrt -- who is so "pro-life" that he hated George Tiller even more than Sam Brownback did, back before Dr. Tiller was brutally murdered for practicing a legal medical procedure.)