Corporations are now free to spend on political campaigns. But they're not immune to blowback 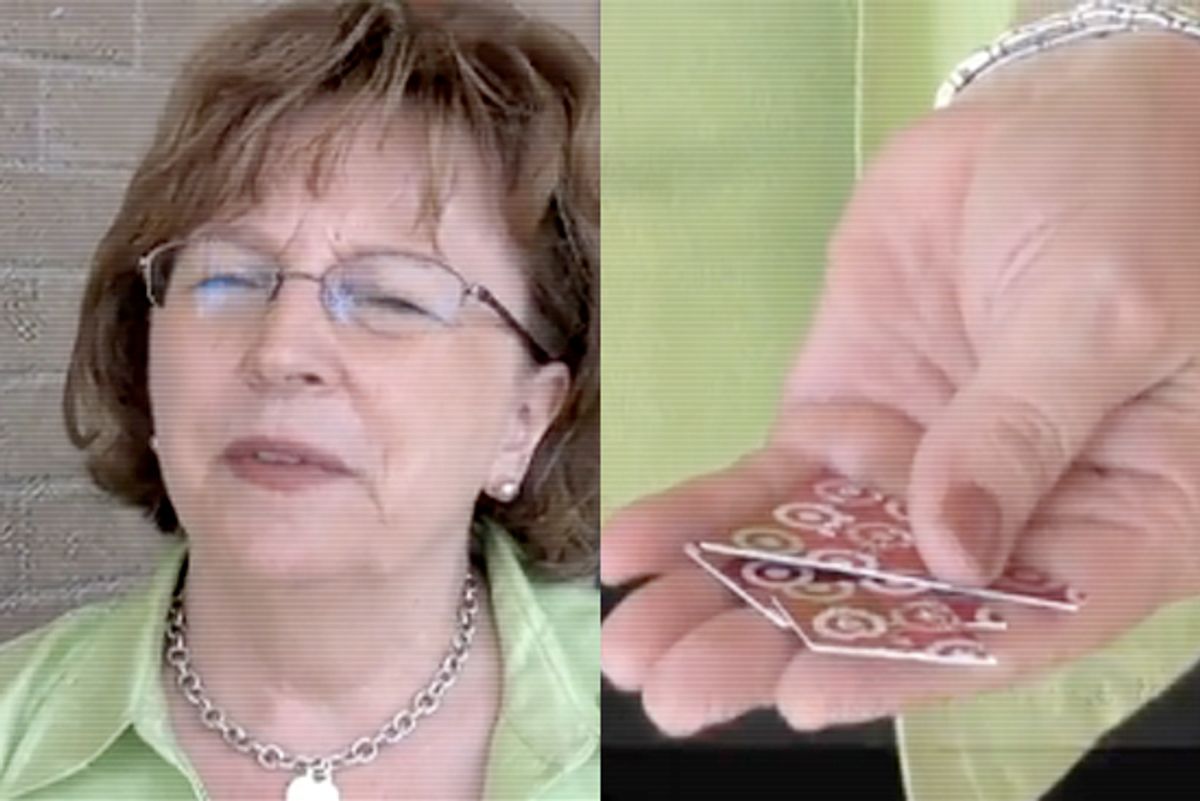 Whoever it was at Target headquarters who decided to give $100,000 in cash and $50,000 in in-kind services to MN Forward, a group that helps a Minnesota Republican gubernatorial candidate who opposes gay marriage, never met Randi Reitan.

Reitan, a suburban grandmother, responded to news of the Target donation by creating a video of herself cutting up her Target credit card at the company's Chanhassen store.

She put the video on YouTube, where it now has been viewed nearly 200,000 times. Just as importantly, portions of the video were featured Monday night on Keith Olbermann's MSNBC show, meaning another 1.5 million viewers saw her emotional action.

Reitan, along with her husband, Phil, has been actively supporting gay causes since the late 1990s, when their son, Jake, then a high school student at Mankato West, told his parents he was gay.

For the first year after he came out, the Reitans, on the advice of psychologists, kept silent.

"It was horrible in the closet," she said. "Jake kept saying he needed to come out."

In his junior year in high school, he came out, forming a gay-straight alliance at the high school.

"We were awed at his courage," Reitan said. "It wasn't easy in a small town then. He brought a gay speaker to the school, and there were parents who actually kept their kids home from school that day. Phil and I looked at each other and said, 'This is crazy. It's the parents who should be leading this fight, not watching their son.' "

Ever since, the Reitans -- mother, father and son -- have taken on causes.

They've been arrested at a convention of the Evangelical Lutheran Church in America. (This was before the church opened up its doors to homosexual pastors.) Jake has become a national leader in opposing the military's "don't ask, don't tell" policies. Name the gay rights cause, and you'll likely find a Reitan involved.

But there was something intensely personal about the MN Forward-Target connection.

"It felt like the money I was spending at Target was going right into the pocket of Tom Emmer," Reitan said.

Emmer, the Minesota Republican Party's endorsed candidate for governor, has been a strong advocate of a state constitutional amendment that would ban gay marriage.

"I had always thought of Target as so sensitive," Reitan said. "I couldn't believe it."

Her first response was to attempt to call executives at Target headquarters, seeking a chance for a face-to-face meeting with the corporation's CEO, Gregg Steinhafel, or at least one of Steinhafel's assistants. No luck.

Instead of a face-to-face, she was left a phone message from Target asking her to make no more calls.

"We know how you feel" was the gist of the message, she said. "Please make no more calls."

It was then she decided to take the video action. The first attempt ended with security people at the Eden Prairie Target ejecting Reitan and the people who were filming her. So, they moved on to Chanhassen where the video was created

The response has overwhelmed her and given her hope that Target will somehow attempt to undo the deed.

A national organization, Human Rights Campaign, has called for Target and Best Buy, which made a $100,000 contribution to MN Forward, to make equivalent donations to organizations supporting expansion of gay rights.

On the Olbermann show last night, it was reported that Target now has made contributions to candidates in six Minnesota legislative races. Three of the donations reportedly went to Republicans, and three to DFLers.

Target did not respond to questions about whether that report is accurate and, if so, which candidates received donations.

It's not clear if all this media attention -- more than 750 stories about the contributions have been published nationally -- has changed minds at Target headquarters.

From the beginning, Steinhafel has tried to make the point that the decision to contribution to MN Forward/Emmer was "a jobs creation" decision, not an attack on gay rights.

In an open letter to Target employees last week, Steinhafel wrote: "As you know, Target has a history of supporting organizations and candidates, on both sides of the aisle, who seek to advance policies aligned with our business objectives, such as job creation and economic growth. MN Forward is focused specifically on those issues and is committed to supporting candidates from any party who will work to improve the state's job climate. However, it is also important to note that we rarely endorse all advocated positions of the organizations or candidates we support, and we do not have a political or social agenda."

Reitan questions that. She believes that earlier generations of Target leadership never would have made such a decision.

"I believe he has a very socially conservative agenda,'' Reitan said of Steinhafel, who has been CEO since 2008.

This is a story that's not going to go away quickly, because it has become a test case from the recent Citizens United Supreme Court case allowing corporations much more direct access to political campaigns.

Reitan's little YouTube video may give other large retailers pause before they run the risk of offending customers.

Emmer, for one, said he's "sad" about the reaction Target's contribution has received.

In a Fox News interview last week, he said, "The sad part to me is I thought we were supposed to be able to exercise our rights of free speech. We're supposed to celebrate the fact that we have different perspectives, and it doesn't seem like that's what this is about. This seems to be more personal, and we've got to get over that."

Reitan, however, says nothing could be more personal than those who would limit the opportunities of her son.

Doug Grow writes about public affairs, state politics and other topics. He can be reached at dgrow [at] minnpost [dot] com.