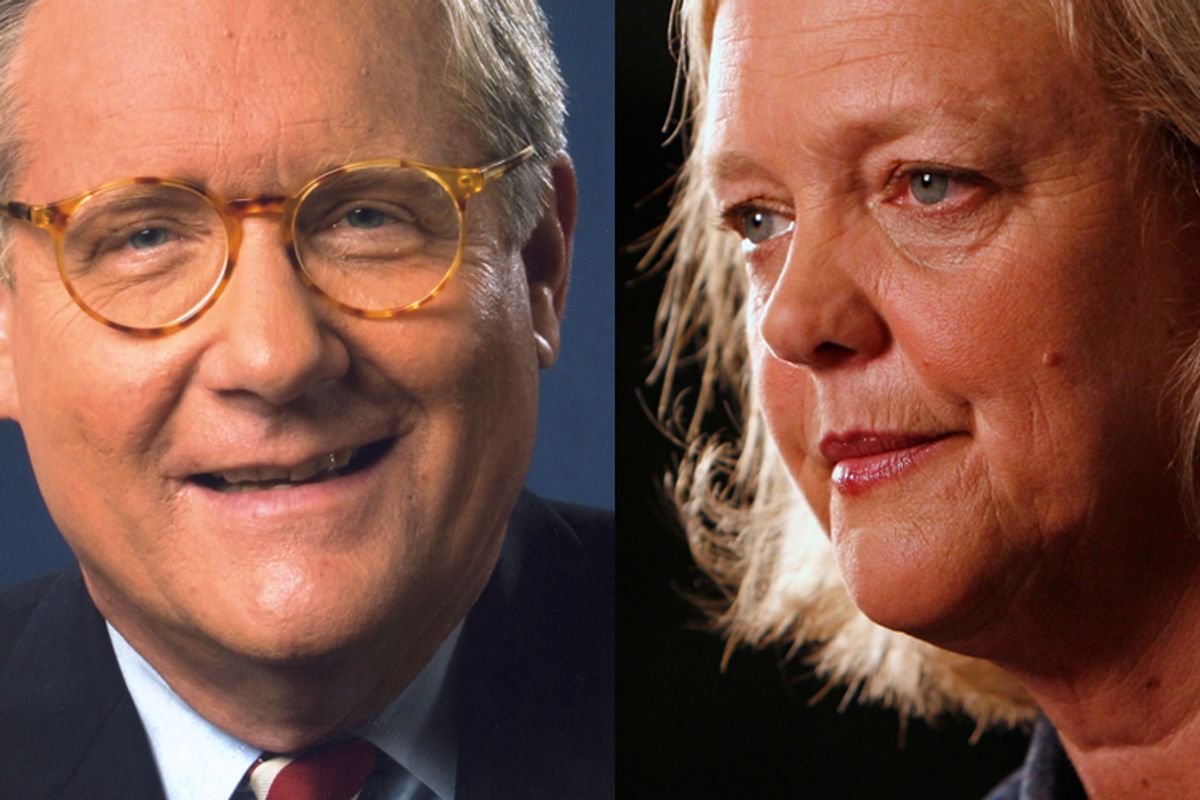 While Fred Barnes continues to avoid responding to reports (and negative comments) concerning the speaking fees paid to him by Republican Party organizations, I’ve come across fresh evidence of his questionable partisan connections. Last year, the Weekly Standard editor and Fox News personality delivered speeches at two additional Republican Party events. Whether he was paid for either or both speeches is not clear yet, but assisting the GOP seems inappropriate for a political reporter anyway.

In late September 2009, the California Republicans held their annual state convention in Indian Wells, where most of the speakers were either party officials or candidates for statewide office, including gubernatorial hopefuls Tom Campbell, Steve Poizner and Meg Whitman. The convention’s Saturday luncheon featured speeches by Whitman, the former eBay executive who has since won the primary, and by Barnes, who had long since  established himself as one of Whitman's biggest fans in the media.

Four months earlier, the Weekly Standard published a Barnes cover profile of Whitman filled with extravagant praise and depicting her as California's savior.  The story led with an early comparison to Ronald Reagan and concluded with the prediction that if elected, Whitman will surely, like the Gipper, be touted as a potential national leader.

She’d be governor of the biggest state, a brainy, conservative, accomplished woman at the top of the Republican ladder with precisely the experience that Sarah Palin lacks. That she’s a social moderate may be worrisome to conservatives. She's pro-choice on abortion but voted for Proposition 8 last year, which barred gay marriage. When Reagan was elected governor in 1966, the speculation about national office -- president, vice president -- erupted instantly. If Whitman is elected in 2010, it will erupt again.

Was Barnes invited to speak at the Golden State GOP luncheon with Whitman thanks to this gushing prose? Was he paid to show up?

The party’s  filing with the California secretary of state only shows one mysterious notation about the Barnes appearance. On Oct. 2, 2009, the party paid $773.09 to Fred Barnes under the category of "staff/spouse travel, lodging and meals." A call to his office at the Weekly Standard seeking further explanation went unanswered, of course.

Whitman wasn’t the only partisan female favored with a personal appearance by Barnes in 2009. In late March, he spoke at the spring board meeting of the National Federation of Republican Women in suburban Washington, where he received a "special gift" from NFRW president Shirley Sadler. Again, Barnes hasn’t returned a call asking whether he received any compensation for lunching with the Republican ladies --- but from the expression on his face in "photo highlights" of the event, he must have endured it all for a very good reason.

Washington Post media critic Howard Kurtz, who has lately bemoaned the "blood sport" of  journalistic scuffling, has yet to comment on Barnes and the Republicans. He is on vacation now and may never get to it. But as Kurtz revealed in his 1996 book, "Hot Air: All Talk All the Time," Barnes seems to have little concern for ethical boundaries:

During the first two years of the Clinton administration, no issue was higher on the national agenda than health care reform. And the largest health care organizations, which had a huge stake in the outcome, were funneling large amounts of cash to some of the very journalists who were covering and commenting on the debate.

One recipient was Fred Barnes, who gives six to eight speeches a month, most of them for a $5,000 fee. Barnes is a regular on CBS This Morning as well as McLaughlin, fills in on Crossfire, hosts a syndicated radio show and a Voice of America program. "If you do a lot of TV and speeches, you have less time to commit real journalism, " he admits.

Here's how the process works. In the spring of 1993, when Washington was abuzz about the need for health reform, Barnes declared on McLaughlin that the notion of a health care crisis was overblown. After seeing the McLaughlin segment, Wladyslaw Pleszczynski, managing editor of The American Spectator, called to ask Barnes to write a piece on the subject for the conservative magazine. As the idea gained currency in Republican circles, Barnes expanded his indictment, saying in a piece for Forbes MediaCritic that the calls for sweeping health reform were based on "media-generated myths." Republican analysts like Bill Kristol and Republican members of Congress began to embrace the argument that there was no crisis. In the fall of 1994, the American Managed Care and Review Association, which represents health maintenance organizations, flew Barnes to Atlanta to deliver a keynote speech to its members. The talk show spiel eventually produced the lecture circuit invitation.

"Maybe I did write something they liked," Barnes says.

Maybe he wrote something the California Republicans liked, too.