The craft that consumed me 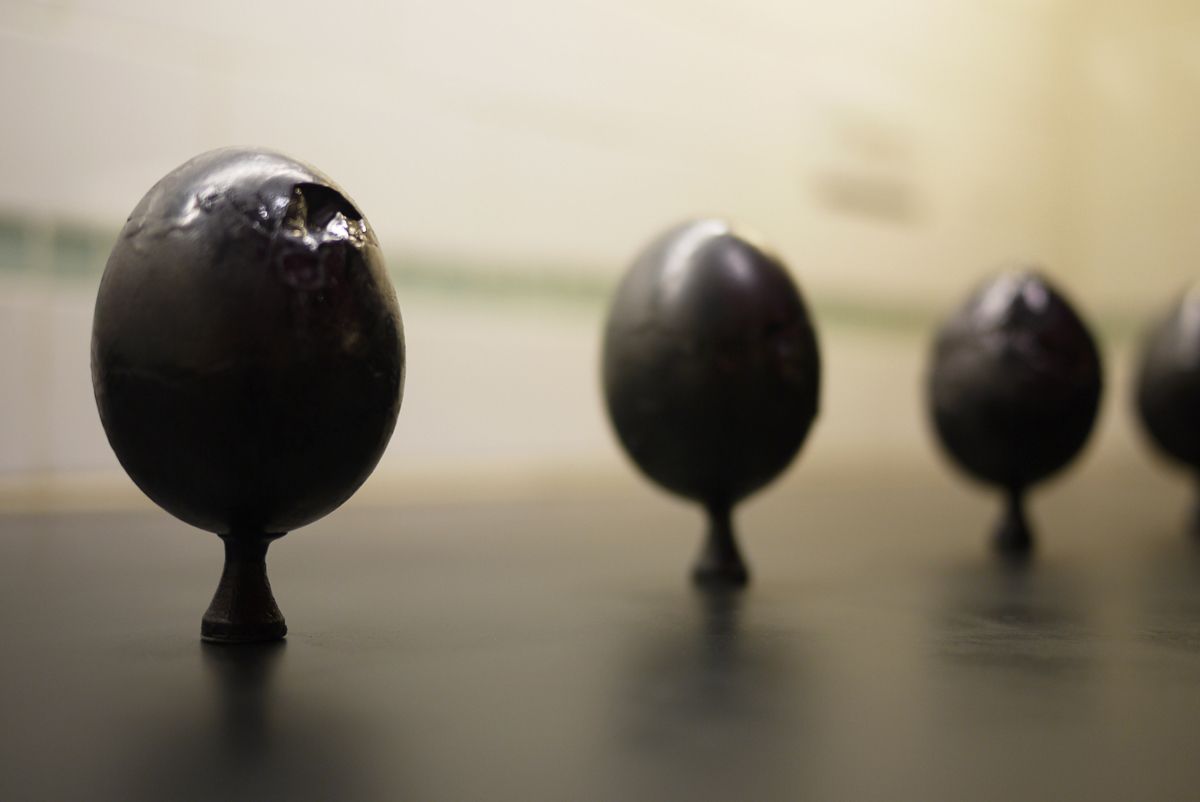 It's rare that I'm not at work on some sort of craft project. I've often enthused about the need to make things; how it employs a unique set of muscles -- physical, intellectual, spiritual -- that I can attain a state of flow when making something that I almost never can when writing. Much like those of an athletic bent who are constantly succumbing to, or having to resist, the impulse to turn everything into a ball (or so I assume. I have never been moved to use a ball even as a ball), if you make things, all objects house the potential to be turned into something else. They fairly beg to be turned into something else.

The eggs were something of a departure, given their utter uselessness. Actually, strike that. That insistence on functionality over aesthetics is something of a lie I tell myself, possibly homophobic in nature, or else it's a penitential inoculation against my getting too big for my britches. If I stress utility, I will be less tempted to think of the visual stuff I make as "art," and consequently of myself as a you-know-what, a label really only rightly conferred by others. I've certainly lost myself in making purely ornamental things before -- lino cuts, paper cuts, snow globes, etc. -- but I do get an extra lift if the finished product is practical to boot.

The most recent obsession just prior to the egg project was duct tape wallets, a perfect storm of pretty and pragmatic that lasted for a good few years. Virtually everyone I know received a duct tape wallet (or in a few rare cases -- three to be exact -- a duct tape evening clutch), rendered in multicolored Paul Smith-style stripes. (Check out TapeBrothers.com, which features an extraordinary selection, even my most-loathed pattern of all time after perhaps animal print anything: camouflage. But brace yourself for the hatred of your UPS guy; good duct tape is very heavy.)

The wallets got nicer and nicer, the craftsmanship ever more deft, and often there is sufficient gratification in that, but with each new billfold, I felt the pleasure of creation ebbing ever farther out. Until one day, like Chris Cooper's orchid thief character in the movie "Adaptation" who, having exhausted his ichthyological jones to such an extent that it was expunged from his system with a final pescaphobic verdict of "fuck fish," I knew that I could not, for the time being, bear to hear that whining protest from the sticky roll as I tore off another length of tape, no matter how pretty the color. So, no more wallets. They would take their place alongside the miniature Japanese folding screens, slide-top wooden boxes, and countless other crafting jags, never to be returned to, for the moment at least. The fallow period never lasts long, though. I have let half-decades elapse between books, because books have to be written and writing is awful, but if you are the type of person who makes things, there is no profit in worrying about how or why or when the next project will come into being beyond simply acknowledging that it is inevitable that it will be very soon. In this particular instance, I was cooking something and thought, Why don't I blow these eggs out instead of cracking them and then I can mount them on those golf tees? (Wooden golf tees, easily 500 in number, a failed promotion for a sports book at a day job I left over 12 years ago. I took them out of the publisher's garbage and brought them home where they sat in a cupboard all these years, just waiting for the moment they would be needed. Needed for what? I never knew, only that their day would come and that I should resist the occasional desire to make some order in the apartment by throwing out a tin of 500 golf tees.) It really was as simple as that.

There was at least something gratifying in how, if they couldn't be useful, they evidenced thrift; kitchen and office waste, both repurposed, coming together as a unified object. The eggs sank -- their downward slide slowed by a bead of glue -- and settled upon their small wooden pedestals with a satisfying stability, the way an arch actually derives strength from downward pressure. But the putty-brown eggshell and colored wooden tees were ugly. Happily, other corporate pilferings over the years meant I have a drawerful of good old-fashioned Sharpies. Now matte black, the egg sculptures' chromatic sins were hidden, leaving behind the pristine and almost Brancusi-like elegance of their form.

After describing them to a sculptor friend, she showed up the next day with a small plastic container of powdered graphite and two solid Koh-i-Noor graphite sticks. "I thought it might make the surfaces more interesting." She was right. Graphite is a marvelous material to work with; slippery and fine and deeply insinuating. The hematite-black powder worked its way into the pores of the shells, deepening and silvering the shell; the light and the dark occupying the same space like a photographic negative.

Now they looked forged, as heavy as iron doorstops. Another friend misjudged the weight of one -- it is an empty egg -- her hand ready for the heft of at least 5 pounds of metal against her palm. The thing went flying, breaking in pieces.

I was surprised by two things: One, that the inner membrane of the egg was still moist, and even warm, fully weeks after being emptied. Such enduring evidence of its animal past despite its mineral-looking present. Second, it was incredibly easy to repair. Actually, let's make that three things: I was unprepared for the repaired egg, with its dings and divots and fissures, to be not just lovelier and more interesting-looking than its whole counterpart, but to evoke feelings of almost parental protectiveness and affection in me. My friend left, apologizing profusely. I impressed upon her repeatedly how little I minded, how truly OK it was.

When she was a safe distance from the apartment, I broke all the eggs.

The reassembly is slapdash, employing all manner of adhesives: Elmer's, a stronger wood glue found in the cupboard, nail polish (the cheapest clear varnish purchased from a clearance bowl at the Duane Reade). There was one specimen I feared was irreparable, so uniquely smithereened was he in his table drop (despite their undeniable femalehood -- they are ova, after all -- I think of them as male, probably something to do with the gunmetal masculinity of their finish and the scrimmaging jostle required in their creation). He had to be triaged, reassembled shard by shard with tweezers and a fine-webbed ligature of hospital gauze, making him resemble one of the evil neighbor boy Sid's chimerical monsters from the original "Toy Story" movie. He's found a good home and is doing quite well by all accounts.

Calamity might be central to their creation, but the fact that I settled on the graphite eggs only proves that there are no accidents. These wounded soldiers are really the only logical things I could be making right now. In the last year-and-a-half, I have been in surgery four times, with more likely still to come. What choice do I have, really, than to mend, resurface and buff these marred specimens back to some sort of life, and to hope to see in their patched and valiant surfaces something like beauty?