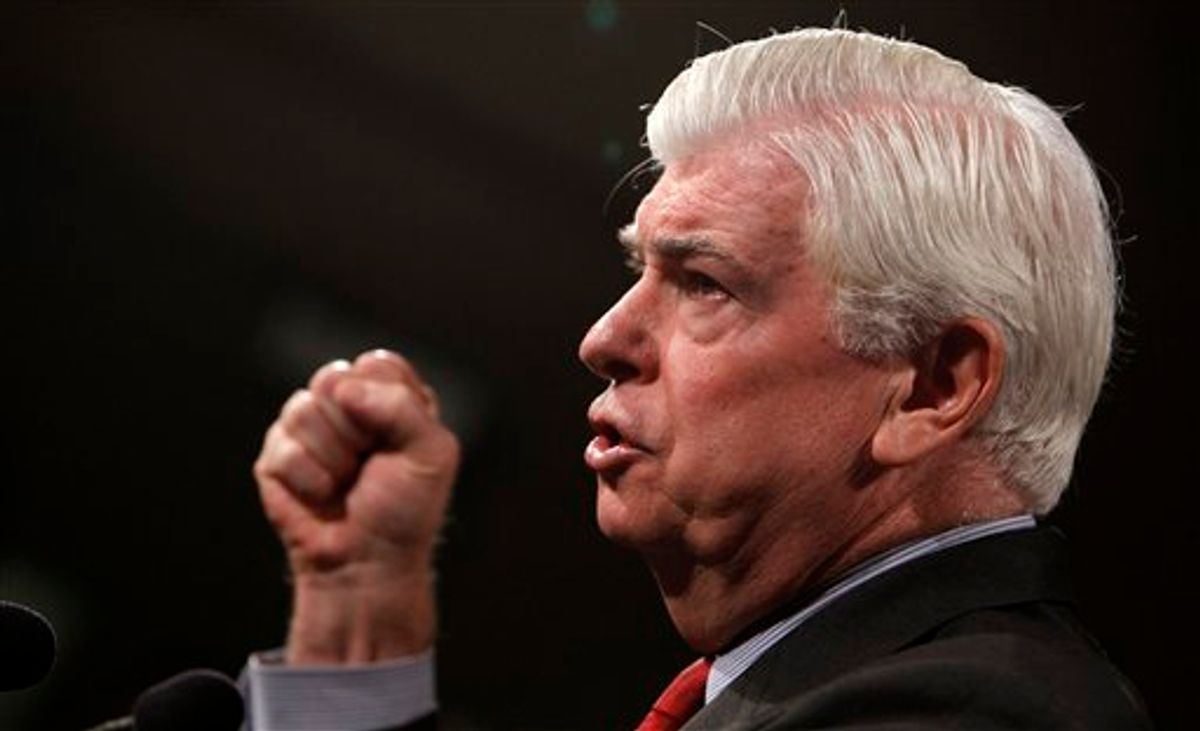 Chris Dodd, the Connecticut senator who is retiring to spend more time getting pubic lice from members of his family, has an important message for the young senators he is leaving behind: Don't try to do anything to fix the brokenness of this terrible institution!

According to the HuffPo's Ryan Grim, Dodd told the Democratic freshman class to back off their crazy ideas about changing the rules of the Senate, which has been done numerous times throughout our nation's history, without any sort of ensuing constitutional crisis.

"I made a case last night to about ten freshman senators, you know, you want to turn this into a unicameral body? What's the point of having a Senate? If the vote margins are the same as in the House, you might as well close the doors," Dodd told reporters in the Capitol.

Yes, just days after the New Yorker published George Packer's definitive account of the Senate's complete inability to deal with the nation's problems, one of its distinguished longtime members was insisting that nothing is wrong, and that the Senate was totally designed to be a broken nightmare where ideas and solutions go to die.

The great thing is that Dodd is all over that New Yorker article, because it in part describes the complete farce that financial regulation -- like health care before it -- became once the Senate took it on. Dodd had a first-hand look at how the minority party has both the incentive and the ability to obstruct the majority's agenda -- even when they agree with the majority. Dodd watched his Republican colleague Bob Corker help craft the legislation, and then not only vote to filibuster it, but even vote for a Republican amendment specifically stripping from the bill the portion Corker worked on.

“The idea of watching Bob Corker vote for the Sessions amendment!” Dodd said afterward, sitting in his red-curtained office, under a print of Holbein’s portrait of Thomas More. “It’s the Senate, I guess.” McConnell’s strategy of obstruction had once again come close to succeeding, Dodd said, but he knew that a “shrinking number” of Republicans were frustrated. The previous day, Dodd had said to Susan Collins, “God, I would have loved to have you as my ranking member on this.” Collins responded, “We could have had such a great time on this bill.”

Now the problem with the Senate is not "too much partisanship" or the breakdown of comity or even specifically the venality of Republicans and the cowardice of people like Corker and Collins.

The problem is that a system (accidentally) designed to function only when serious, unaccountable grown-up elites politely agree to work together in the common interest of all Americans cannot function when its membership is made up of popularly elected professional politicians with entirely incompatible world-views and frames of reference. One solution -- the Dodd solution -- is for senators to magically become smarter, more reasonable people who routinely act in direct opposition to their own electoral self-interest. The other option, that Dodd now argues against, is to just make it so that you don't need magical benevolent elder statesmen in order for the Senate to get any business at all done, by changing arbitrary rules and parliamentary tricks that have become routinely abused.

(There is also a third option, abolishing the archaic and scandalously undemocratic Senate entirely, but that would probably require a Constitutional amendment, which would require a Senate supermajority.) (Or a constitutional convention I guess, but can you imagine what our state legislatures would add to our new constitution?)

Here's another Dodd quote from the Packer piece, in which he worries that the excited young Democratic senators will become disillusioned with the Senate if things don't change:

Their interest in legislating has won the admiration of senior senators. “If they can stay, I think they’ll be terrific,” Chris Dodd said. “My worry is they won’t stay. Because it’s not productive.”

"This has been an incredible Congress," Dodd said this last Tuesday to his soon-to-be-former colleagues, "and I've never served in a more dynamic process where more has gotten done."