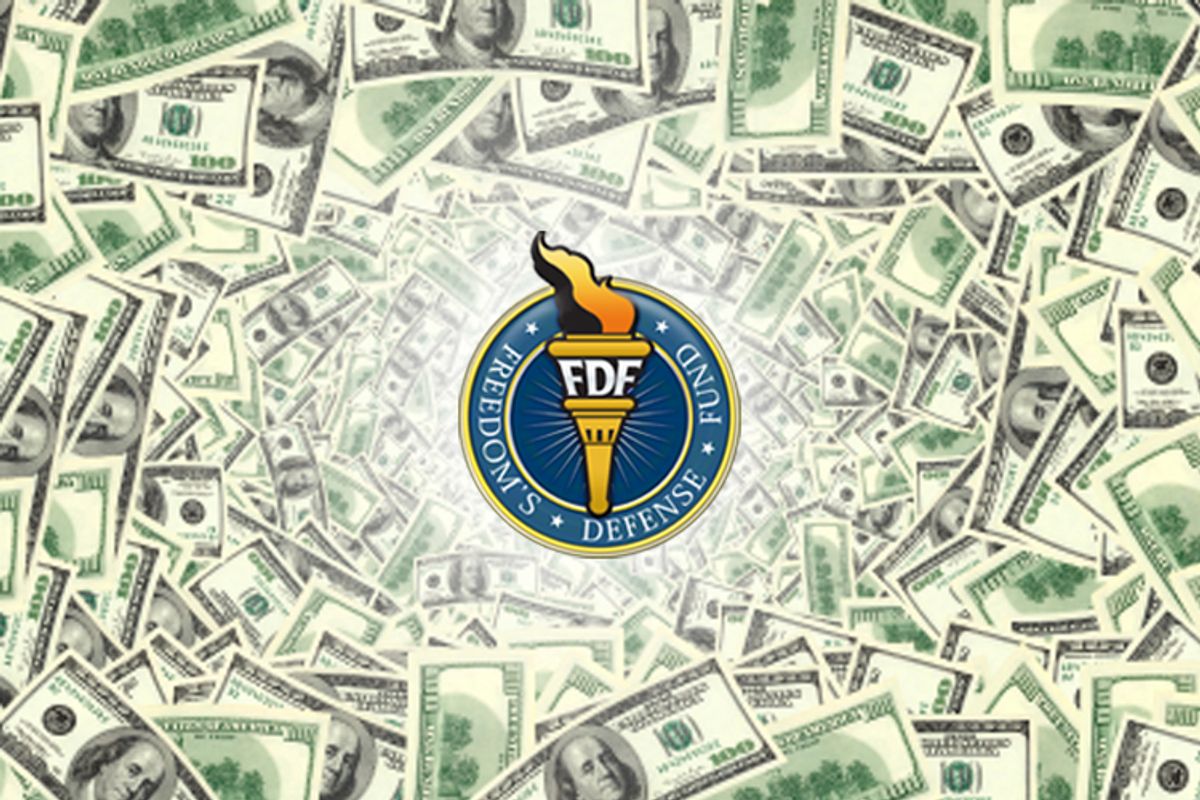 Thousands of grassroots conservative donors around the country who believe they are contributing to the fight to reclaim Congress in the fall have actually poured millions of dollars into a group of political action committees whose primary function appears to be enriching a notorious Washington direct mail fundraising firm, Salon's review of the groups' FEC filings shows.

The PACs -- Freedom's Defense Fund, the Black Republican PAC, Veterans for Victory, and the Republican Member Senate Fund -- are all based out of post office boxes in Washington and all have a treasurer in common: Scott Mackenzie, a campaign finance consultant at Base Connect, the direct mail firm. Formerly known as BMW Direct, Base Connect has long been controversial for its practice of raising large sums of money for long-shot conservative candidates, who in turn pay Base Connect as much as 80 or 90 percent of the money raised for its services.

The PACs appear to be a clever twist on that model: Instead of having to find and pitch a congressional campaign on its services, Base Connect can, through the PACs, send out fundraising solicitations each election cycle on the basis of evergreen issues like promoting black Republicans. Of the money raised by the four PACs, 60 to 70 percent typically goes to Base Connect and its affiliates. Meanwhile, the PACs have spent from as little as 2 percent to as much as 6 percent of the money raised on funding actual campaigns -- a strikingly small share. The rest of the PAC's funds go to operating expenses like bank and legal fees, and occasionally to consulting fees to people such as conservative activist Jerome Corsi.

The four PACs this cycle have generated $2.3 million in fees for Base Connect and its "partner" firms Century Data Systems and Legacy List Marketing. All three firms are based at Suite 410, 1155 15th Street NW, in Washington.

Base Connect has been able to continue to find clients despite years of negative media coverage. Nevada Senate candidate Sharron Angle has paid the firm over $600,000 this cycle.

And despite their spending practices, some of the PACs actually tout their efficiency to potential donors -- many of whom are giving small donations of $25 or $50. "With no office, overhead or staff, every dollar raised is leveraged to help build a better America, to hold liberals accountable and to rebuild an American conservative majority," says Freedom’s Defense Fund on its website. Veterans for Victory promises contributors: "all donations are directed to supporting a strong military in defense of traditional American values."

Not all conservative operatives approve of these kinds of seemingly predatory direct mail tactics.

One veteran Republican strategist told Salon there's nothing in the law or electoral regulations that bans this arrangement, but "there is something in the moral code of being a human that bars it ... An awful lot of the donors really do live on limited resources. When people come along and just rip them off, it's just wrong."

This isn't the first cycle in which Freedom's Defense Fund in particular has functioned mainly as a source of fees for Base Connect. When the Capitol Hill newspaper Roll Call reported on the group's eyebrow-raising finances in April 2008, its director, Michael Centanni -- also the chief operating officer of Base Connect -- told a reporter "to check back with the group in November, when he expects expenses to dwindle and predicted that three cycles of donor mining will finally pay off."

"We will be spending a lot more money ... on contributions to candidates," he told the paper.

But that never happened.  There was never a significant jump in spending on campaigns that year.

Responding to Salon's request for comment last week, Centanni passed along a statement from Freedom's Defense Fund executive director Todd Zirkle complaining that Salon was not giving the group enough time to comment. Told the story was not running immediately -- this was last Thursday -- the group did not respond.

Base Connect executives have argued that as much as 35 or 40 percent of the money paid to their firm goes directly to postage costs. But even assuming that is true, the firm is still taking five or 10 times as much money in fees as the amount going out to help campaigns -- and the donors are still seeing virtually none of their money helping candidates.

Here's what we know about the four PACs that have Mackenzie, the Base Connect consultant, as their treasurer:

This outfit, which currently does not have a website, managed to raised about $585,000 so far this election cycle with direct mail campaigns. The PAC has spent virtually all the money, but just 3 percent -- $19,000 -- went to contributions to a few candidates around the country like Tea Party congressional hopeful Allen West in Florida. What about the rest of the money? $361,000, or 62 percent of the total raised, went to Base Connect companies, and the remaining money went to other operating expenses like bank fees and printing costs.

"Because what we conservatives need right now more than anything else is someone and some group who can speak the truth about Obama without being intimidated by the 'racist' label," went one of the group's direct mail pieces in 2008.

But to put the numbers another way, those conservative true believers who opened their wallets aiming to help black Republicans have actually seen just 3 cents on the dollar going to the cause -- though few, if any, likely realize this. Much of their money instead went to the direct mail shop whose (white) consultant, Mackenzie, also works as the treasurer of the Black Republican PAC. The ties don't end there: When Black Republican PAC was created in 2007, it listed the address of Base Connect as its headquarters; the PAC's address is now a P.O. box.

This group has raised $2.1 million from small donors so far this cycle. Six percent -- or $120,000 -- has gone to conservative campaigns and to buy a run of ads for William Russell, a conservative veteran who in May lost in the GOP primary for Rep. John Murtha's seat by 14 points. The rest of the money raised by Freedom's Defense Fund has gone to operating expenses, with 50 percent of the total raised, or just over $1 million, going to Base Connect and its affiliates.

Other "initiatives" of Freedom's Defense Fund include an ad released after the 2008 election encouraging viewers to go to the group's website and say, "Thank You, Sarah." It's unclear whether the ad, which was likely intended as a fundraising gimmick, ever actually aired:

Samples of the group's other spending: $7,500 went to Jerome Corsi, the far-right gadfly who wrote 2004's seminal swift boat attack text "Unfit for Command," for "fundraising consulting"; another $189,000 went to an entity called the Freedom's Defense Fund State PAC, which is based in Washington but does not appear in the district's online fundraising database. This group may have something to do with Freedom's Defense Fund's anti-D.C. statehood initiative. "Does the thought of Senators Jesse Jackson and Al Sharpton scare you? At the Freedom's Defense Fund, we think it should," the initiative's website asks, then appeals to readers to "give generously."

This is an odd little PAC that features lots of images of military hardware and American flags on its amateurish website. It financed a few TV ads promoting conservative candidates in the 2008 cycle.

Says the longtime GOP strategist of this tactic: "They'll go hire a media firm they get along with, which will produce an ad. They'll buy cable time at 2 a.m. in Detroit on some cockamamie affiliate, so they can say, 'We ran this ad.'"

While Veterans for Victory promises that "[a]ll donations are directed to supporting a strong military in defense of traditional American values" and that "contributors provide a major boost to help elect pro-American, pro-military congressman and a pro-American President," its FEC filings show that is far from true. Of a total $995,000 raised and spent this cycle, less than 2 percent, or $17,500, has gone to candidates.

Meanwhile, $615,000 (62 percent) has been paid to Base Connect and its affiliates, with the remaining money going to other operating expenses. The PAC's director, Russ McCurdy of Washington state, did not respond to a request for comment.

Not much is known about this outfit, which has no website. But its spending patterns match the other Base Connect-linked PACs. It raised $505,000 this cycle, spending $21,000, or 4 percent of the total raised, on giving to campaigns. Meanwhile, 70 percent of the money, $354,000, went to Base Connect and its partners.

The PAC gave $1,000 to Sharron Angle in Nevada and $3,000 to the National Republican Campaign Committee (the official GOP group) earlier this year. And in 2009, it gave $5,000 to the Michigan congressional campaign of Jay Riemersma, a former NFL player locked in a Republican primary. An attack ad aimed at one of Riemersma's opponents apparently sponsored by the fund has caused a minor flap in the district.

(Special thanks to the Center for Responsive Politics for advice on the FEC data.)