Actually, a Hillary-for-Biden switch could work 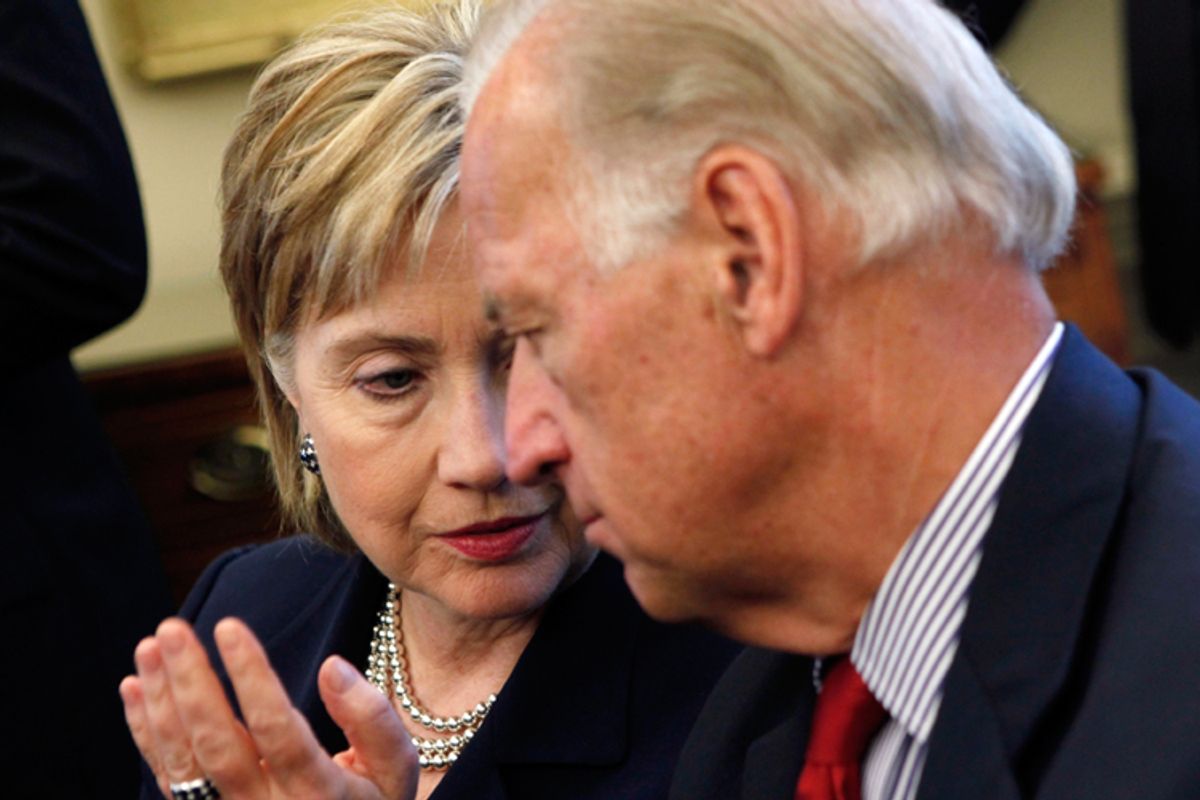 Earlier today, my colleague Steve Kornacki -- long skeptical of the idea of a gossiped-about Obama- Clinton ticket in 2012 -- took specific issue with John Heilemann, who recently speculated on "Hardball" that Obama could use Hillary Clinton (and her husband, natch) to bolster his faltering approval ratings among white voters. Kornacki was correct to call this an "absolutely terrible case" for putting Hillary on a 2012 ticket. This notion -- that Hillary could caulk Obama’s working-class white people cracks so much more effectively than Joe Biden -- is not only a little far-fetched, it is a rehash of old anti-Obama talking points, reheated from the spring of 2008.

But where Kornacki and Heilemann get it wrong is in conceiving of Clinton’s presence on the ticket only as a corrective to Obama’s perceived shortcomings, rather than considering that Clinton would function as a sparking energy-generator of her own. They seem to forget that aside from her imagined ability to tidy up Obama’s frayed demographic ends, or somehow speak more skillfully to working-class Americans than the current vice-president, Hillary’s presence on a presidential ticket would bring a little something else to the equation, a little something different, not like the others ...

Hillary Clinton almost won her party’s nomination for the presidency two years ago, getting the second most votes of any Democrat in American presidential primary history (the most, if you listened to the PUMAs, which you shouldn’t have) and, thanks in no small part to her ultimate loss -- which spared her from an administration that probably would have looked identical to Barack Obama’s -- she is currently the most popular politician in the country right now. Also, Hillary Clinton is a woman, whose presidential foray inspired and energized millions of people anxious to make history by electing her president -- people who have historically been and remain a fundamental core of the Democratic Party. Hillary Clinton would bring Barack Obama, a president who both Kornacki and Heilemann acknowledge is in need of a little bump for 2012, the kind of excitement that he is not generating on his own right now. And that has nothing to do with anyone’s ability or inability to talk to white people.

I should say upfront that I am not advocating the choice of Hillary as a 2012 running mate, merely suggesting that it’s not as loony-toons as my colleague seems to think it is. Because what Hillary Clinton would give the Obama ticket -- aside from her 18 million still-devoted voters, who would be offered fresh motivation to get off their Obama-dissatisfied duffs and return to the polls -- is the chance to make history. And that history-making high was part of what brought so many Democrats out in 2008.

If there’s anything that Democrats should be learning from the media-baiting onslaught of Republican women, Sarah Palin and her mama grizzlies -- and what they should have learned from the fierce (not to say occasionally delusional) support Hillary drew in 2008 -- it’s that the American appetite for female leadership exists; it’s not just some figment of the late Bella Abzug’s imagination, it’s real; women (and men) care about changing the uninterrupted history of male presidential and vice-presidential power; many of them will care enough to come out and vote to make it happen.

The conventional wisdom cited by Kornacki -- that vice-presidential candidates do not make a difference in elections, that even mismatches like Lloyd Bentsen vs. Dan Quayle don’t make a dent at the polls -- may be historically sound, but will not necessarily hold up when it comes to a candidate like Hillary Clinton, any more than historically sound conventional wisdom about young people not showing up at the polls applied to the election of Barack Obama.

I know that to even acknowledge that Clinton’s hypothetical place on an Obama ticket would give her a historic mission of her own is to invite squawks of dismay about how she will try to outshine and un-man him, but it is a disservice to both Clinton’s and Obama’s ability to strategize to fail to consider that the support she gins up on her own, and not simply by dancing like Ginger Rogers to Obama’s now less popular Fred Astaire, would be a big reason for Obama to run with her her.

While Kornacki dismisses much of the Clinton talk as a scenario bolstered by the secretary of state’s celebrity, there is another factor only tangentially related to the history-making and political capabilities of Clinton: Obama's putting Clinton on his ticket would make a great story. And anyone who supported either of the candidates in 2008 should understand the political power of a good story. Clinton and Obama have always had powerful political chemistry, strong enough to glue us, unblinking, to their every frustrated, crackling exchange during the drawn-out campaign. Putting them on the same ticket would be an undeniably electric choice.

I have no idea whether Hillary would ever run as Obama’s vice-president, or whether Obama would ever consider asking her to do so (although squawkers recall: Campaign reporting now suggests that he did once consider it, seriously). I don’t know if it would be a good idea or a bad idea. Kornacki is correct that to do it and lose would be disastrous for everyone involved, as well as for the nation. But what I do know is that a lot of other people out there would love it. And that’s not nothing.